The Goon: Bunch of Old Crap – An Omnibus Volume 1 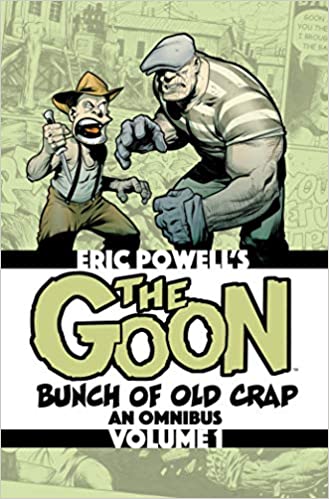 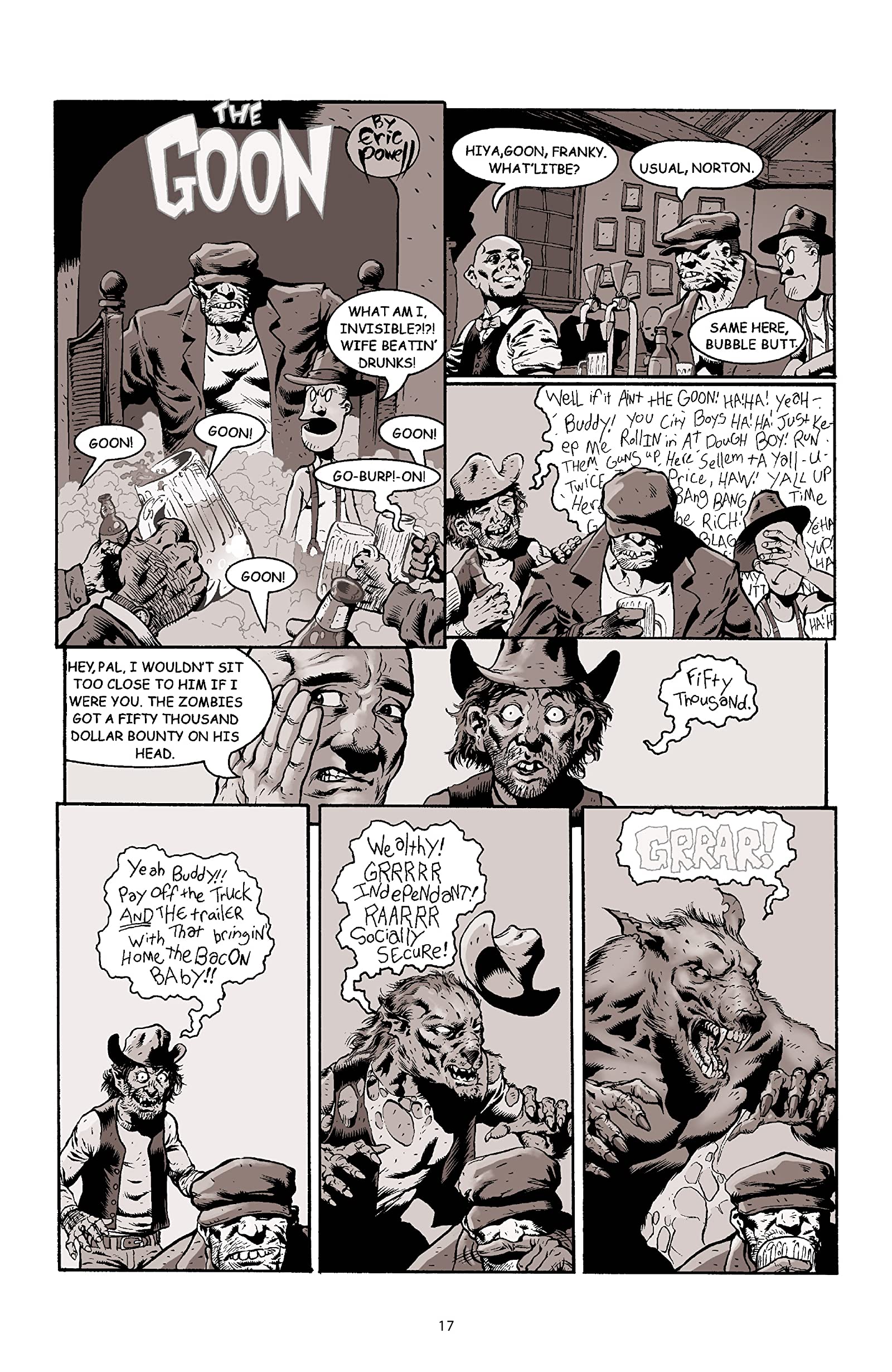 The Goon: Bunch of Old Crap, Volume 1 is basically a smaller, cheaper version of The Goon Library: Volume 1, paperback rather than hardback, normal comic book size rather than bloody huge.

The Goon is, quite simply, a story about a mob enforcer fighting zombies, with comedy usually to the fore. Eric Powell’s influences include Will Eisner’s The Spirit, pulp books and magazines (most apparent in his beautiful painted covers), Norman Rockwell, Walt Kelly’s Pogo, Mike Mignola’s Hellboy and Jeff Smith’s Bone. Clearly a man of great taste, he even cites Alfred Bestall’s Rupert work as an influence.

This omnibus collects four trade paperbacks. The first is Rough Stuff, and the title says it all, as this section is a bit ragged. However, the basic premise is appealing, and the execution shows quite a bit of promise, improving with each page. It’s interesting to see they’ve reverted to the original black and white, as it was coloured (by Dave Stewart) for the trade paperback, and that’s how it appeared in the Library edition too.

Between the maiden collection and the next, Nothin’ But Misery, Powell underwent a transformation akin to many a comic book superhero granted mysterious powers. His work is suddenly very polished, and he seems to arrive almost fully formed as a bona fide comic book great. He pushes himself to new heights with each story, and the results are a delight. My Murderous Childhood (and Other Grievous Yarns) is more of the same, with Powell expanding his cast of outré characters while constantly, and often surprisingly, adding layers to their personalities.

By the time we reach Heaps of Ruination, the final book collected here, Powell really knocks it out of the park. A guest appearance from Hellboy (with some pages drawn by Mignola) is a real highlight, though the rest of this section is so good that it has a great deal of competition.

This benefits from being the work of a single creator. While there’s no denying that there are great collaborators, there’s something about the clarity of vision when there’s one person creating the whole thing. This is especially true of Powell, who still puts actual physical lettering balloons onto his artwork before the pages are scanned into a computer for colouring.

As always, there’s a ton of bonus material: sketchbooks, galleries, unused covers and much more.

It would appear that this series replaces the now out-of-print Library series (one volume of which sold for £540 on eBay in January 2021). It’s smaller, more affordable, and, one could argue, a much more sensible size: Powell’s work is usually clear enough that there’s no great need for oversized pages.

We’ve knocked off a half-star because the first section is relatively amateurish, but the rest of this collection is outstanding. This Bunch of Old Crap is, in reality, some seriously good sh*t, man.