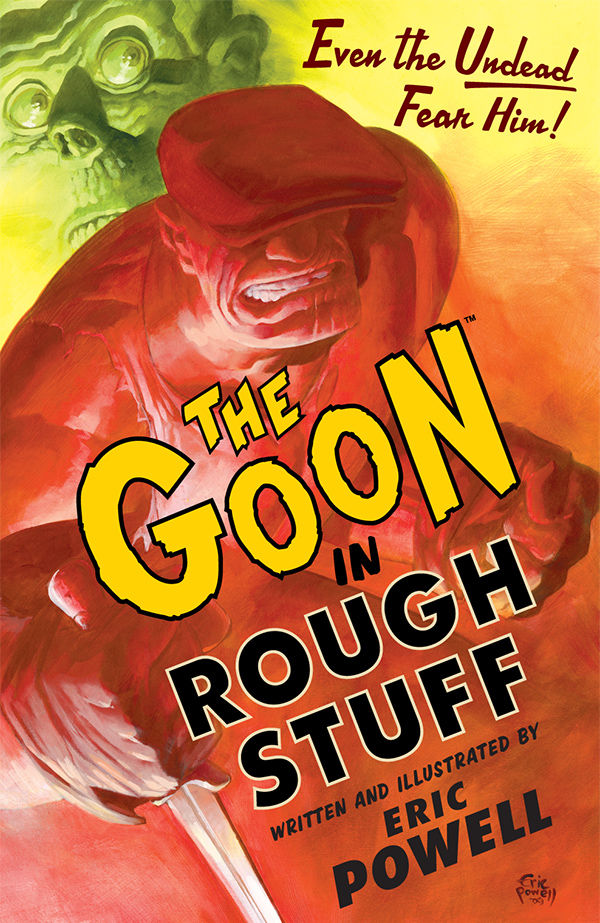 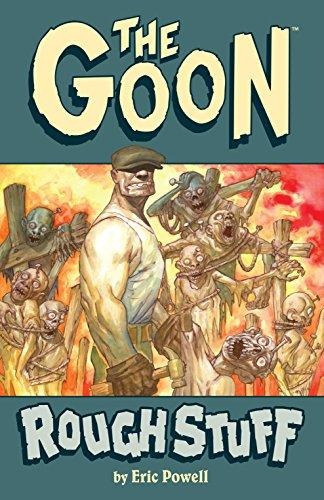 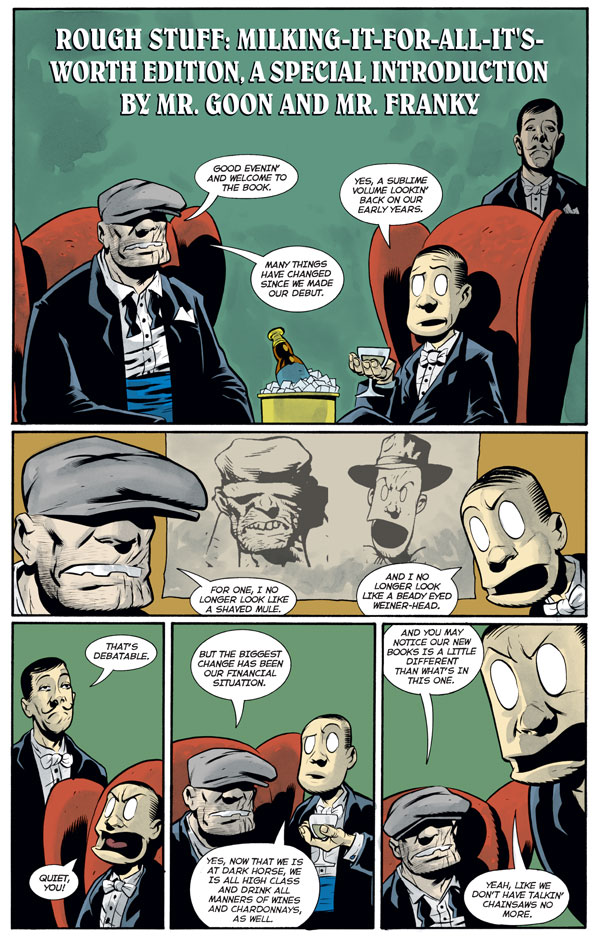 The Zombie Priest has come to Lonely Street, and the only thing preventing him and his army of the undead from taking over the entire town is a buck-toothed gangster called the Goon. Think Hellboy meets Goodfellas with a bit of Monty Python thrown in for good measure and you won’t be far off.

This collection’s called Rough Stuff for a reason, one that creator Eric Powell happily owns up to in his introduction. As he says, if you’re looking for an artist at the peak of his creative powers then you’d best look elsewhere. However, if you’re interested in seeing the progression of their style from aspiring amateur to top tier professional, then you’ve come to the right place.

We kick off with a new two-page introduction in which Goon and constant companion Franky (catchphrase: “Knife to the eye!”) set the scene for what’s about to follow. The first story features, amongst other things, the Goon being attacked by a werewolf, giant man-eating rats and a giant zombie chimp, which seems to fluctuate between about 15 feet and 80 feet tall. As noted, the art is quite rough.

The next story’s not much calmer. Goon and Franky are attacked by a vampire, a zombie that’s two guys stitched together and Fishy Pete, a giant fishy who-knows-what. It also features a talking chainsaw. This is a bit more polished, though just as bonkers.

The third and final chapter contains the Goon’s origin story (actually, two slightly different versions of the same story). This section is drawn in pencil, a technique that Powell often uses for flashbacks. It’s interesting to note that these look much more impressive than the inked sequences. Clearly, at this stage, his pencilling was superior to his inking, but this was something he would soon remedy. It’s here that we see Powell’s writing really start to improve. It’s still a bit clunky, but in general more coherent and slicker.

There’s a lot of bonus material. As well as the intro mentioned above, there’s seven pages of additional material taken from the Goon website, and a hefty sketchbook section.

The artwork is mediocre at this stage, like a Bernie Wrightson wannabe, with way too much cross-hatching. The writing’s similarly rough, with spelling mistakes liberally sprinkled throughout the book. But… even in this slim volume we see a continual and marked improvement in the quality of both art and writing, and it’s always interesting to see the early work of a creator that would go on to be very successful. It’s with the next volume, Nothin’ But Misery, that Powell would really begin to deliver on the early promise shown in this book.

This also opens both the oversized hardbound Goon Library Edition and the smaller volume one of Bunch of Old Crap: An Omnibus.