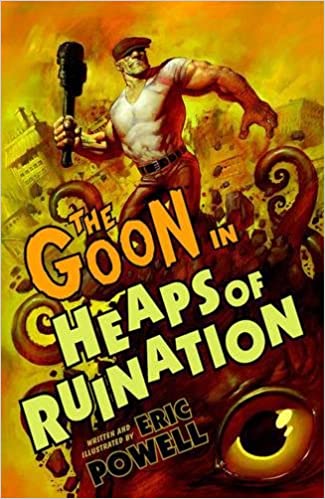 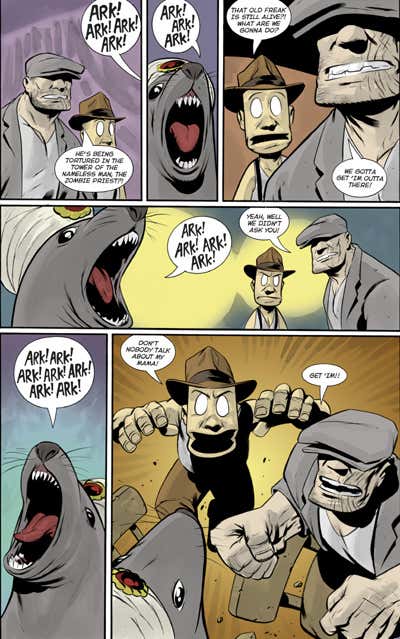 The Goon 3: Heaps of Ruination is the fourth book (there’s a book zero) in this constantly improving series. In his introduction, Frank (Shawshank Redemption) Darabont, posits his credible theory that The Goon is the flipside to Will Eisner’s Spirit. Coincidentally, this introduction was written just after Powell won his first Eisner award, that for earlier work. He’s since been nominated for thirteen, and won five.

In the first story, Goon and his pals attempt to rescue Buzzard from the Zombie Priest’s clutches. This story features a return appearance by the Psychic Seal. Put simply, the seal barks, yet Franky and Goon are somehow able to understand everything it says. It’s apparently a very sassy seal, and it invariably gets a kicking for its cheek. Brilliant.

Goon assembles his own version of the Avengers. As well as Franky, we also have the Mudd brothers (bog lurks), Merle the werewolf and the triumphant return of Dr Alloy, mad scientist. This tale features widescreen action, literally, with many panels drawn across both pages. The story’s genuinely exciting, with a real sense of threat, and it continues to add more layers to the tale of Goon and his motley crew.

The next story shows Powell, grown in confidence as a writer, having fun with language. First off it’s the many-eyed and many-tentacled monster that invades from another realm. The beast uses an ‘Intergalactic to English Dictionary’, and it clearly doesn’t work very well. The monster, in its death throes, swallows a toad and explosively births the big monster of the piece: Lagarto Hombre! The Godzilla-sized beastie spouts hilariously nonsensical Spanish, which Powell arrived at by writing drivel and then running it through a translation programme. Woe betide anyone who went to the bother of translating it! A few readers even got annoyed about this, missing the joke entirely. This is a superb homage, and piss-take, of Godzilla and all those giant monster stories Jack Kirby did so well, and it’s very funny.

Goon and Hellboy work beautifully together. They share the same approach to most things (which often involves punching monsters) and the banter is outstanding, with Franky insisting on calling Hellboy Rosie, on account of his colour. Another KRANG! and it’s back to Mignola for a final page that ties the story up with a big red ribbon. Which in this case is Hellboy’s reaction to what just happened. Superb.

The final story – ‘The Vampire Dame Had to Die!’ – features a bunch of useless, camp vampires, much like those in What We Do in the Shadows, only more stupid. Their butts are roundly kicked by Goon, and they decide to raise a vengeful spirit to attack him. She’s a life-sucking vampire that goes on to drain Franky, Norton the barkeeper and many others. She eventually meets Goon and, rather than attacking him, or being punched into next week by him, they instead have a touching encounter that provides an insight into Goon’s pain and suffering. This is a moving story that starts out very funny and eventually morphs into something else entirely.

An outstanding collection, with four brilliant stories, each in their own way, so it doesn’t get much better than this. These stories also feature in two bulkier collections, the hardback Library Edition, and Bunch of Old Crap Volume 1.