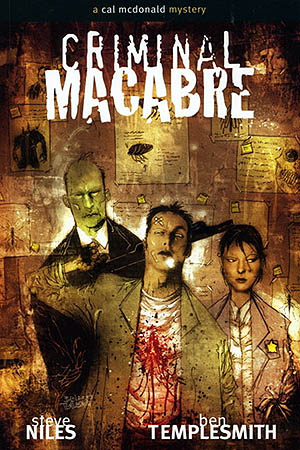 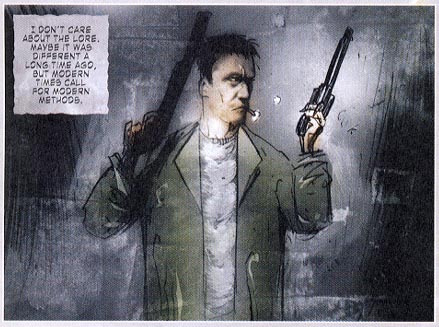 Steve Niles reportedly created Cal McDonald in 1990, but it was only after the success of Niles’ and artist Ben Templesmith’s 30 Days of Night that Cal ventured out again in Criminal Macabre, reuniting the creators.

Cal McDonald is gifted (he says cursed) with the ability to perceive and interact with the supernatural realm, a reality that co-exists side by side with humanity, but which humanity for the most part chooses to ignore. Monsters are portrayed a little differently in Cal’s world. Ghouls are (mostly) peace loving citizens who go for walks in the California sunshine, while vampires, werewolves, zombies and other monsters are the dregs of society. These monsters generally lack their more traditional abilities and weaknesses, although this story has Cal investigating events where the monsters are organising and becoming more like the creatures of legend. While this could lead to a rather standard horror story, Niles avoids that by making Cal your less-than-typical monster hunter, and improvising with the more traditional means of monster slaying in very comic and original ways.

Formerly a cop kicked off the force for substance abuse on duty, Cal often solves crimes and mysteries with the help of his ghoul partner Molock and the rest of the ghoul community. In spite of their grotesque appearance the ghouls are warm and engaging, and genuinely respect Cal despite the mess he is in most of the time. The tale is simultaneously noir and horror, Niles and Templesmith blending the two quite seamlessly to make it both creepy and intriguing.

Niles repeats this trick with Cal, who is simultaneously repulsive and attractive. He puts the anti into anti-hero with his drinking and pill-popping, barely out of a hangover before he’s nursing the next buzz. He’s arrogant and wildly inappropriate. He appears incredibly shallow, but it’s a façade he presents to protect people because Cal attracts danger and disaster like a super-magnet in a bucket of nails. Everyone he knows is at risk by mere association, so he meets threats head on with tenacity and brutal yet effective violence.

With his entire family gone Cal numbs the pain completely surrounded by a sideshow of strange occurrences, yet never fails to see the funny side. It may be a comic turn of phrase courtesy of Niles or a well-drawn streak of green snot during a police interview from Templesmith, but there is a deadpan and dry dark humour shot throughout. That can, however, diminish the true horrors often threatened by prompting laughter rather than squirming.

Templesmith’s art creates a weird and tense Gothic atmosphere accentuating the descent into a nightmare situation with a gritty, grimy noir crime feel. It’s a great balance of two styles to perfectly complement Niles’ story and create a sort of horror noir genre, allowing us a glimpse of the world as Cal sees it at the same time..

Cal McDonald is a sympathetic character. He isn’t perfect, but wants to do the right thing by everybody else if not for himself. He’s a real anti-hero all the way to his soul, next seen in Two Red Eyes.