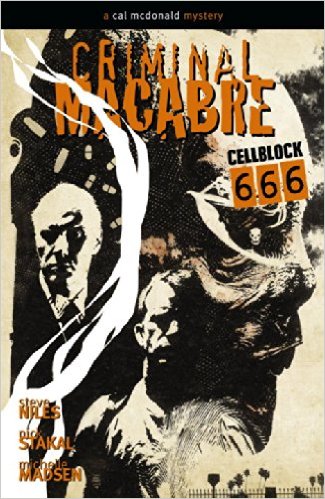 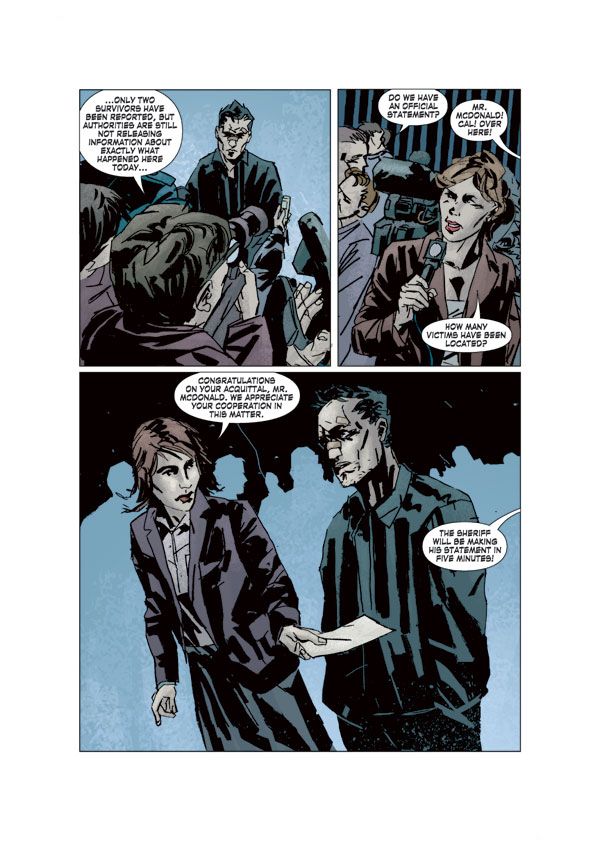 Steve Niles’ anti-hero Cal McDonald is so regularly punished by his creator, you wonder if Niles loves Cal or hates him. Cell Block 666 sees Cal doing time in prison on trumped up charges. Betrayed by a ghoul, all is not as it seems in this penitentiary and Cal, as usual, lands slap-bang in the middle of it. Desperate times call for desperate measures, so Cal decides to use the tactics his enemies usually employ, and it’s not long before the whole place is up to the eyeballs (literally) in vengeful undead.

It’s a much faster pace than usual for Niles, working again with Nick Stakal. The story moves quickly,  but is much more straightforward than previous collections. Sure, it is full of the usual crime and horror genres cliches, but Niles and Stakal both parody and pay homage to it all with great glee. This is more fun than My Demon Baby if only because there is more focus on the ghoul Mo’Lock than in previous books. More depth is added to his character yet again, amusingly as he learns how to make jokes. The setting is pretty fixed and rarely moves away from its prison confines, and Cal is so defiantly irreverent that it all adds to the caper.

Stakal is again in stomach-churning form with various forms of death from disemboweling to brain snacking, the zombies so gruesome they’d make George Romero envious. It’s large scale carnage, but Stakal’s best work is when he focuses on Cal, Mo’Lock and the relationship between them. A Mo’Lock barely restrained after learning of a traitor among the ghouls is very well delivered, the reader able to see rage simmering under putrid skin, and Cal trying to convince Mo’Lock to smuggle more than cigarettes into his cell is priceless. That Niles and Stakal can give soul to a soulless being is remarkable, Mo’Lock being easily one of the most likeable and relatable characters of the series – undead or not.

It is obvious both creators enjoy this work without taking it too seriously, yet it’s still very gritty and very funny. You squirm and guffaw at the right moment for each and occasionally you do it all at the same time. While it may all seem familiar – indeed there is nothing new under the sun – don’t be surprised if you reach the end of this story and start looking for your next Cal and Mo’Lock fix. Provided you’re not too squeamish. It’s found in No Peace for Dead Men.

Cell Block 666 can also be found along with the previous two Cal McDonald graphic novels Two Red Eyes and My Demon Baby in the second Criminal Macabre Omnibus.