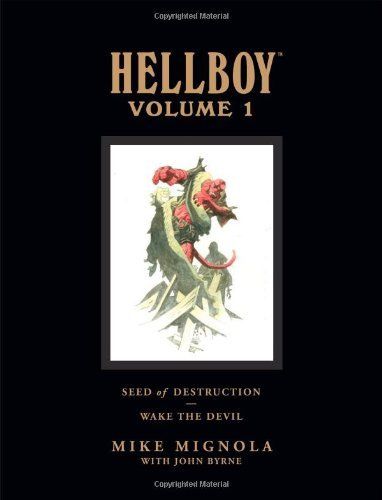 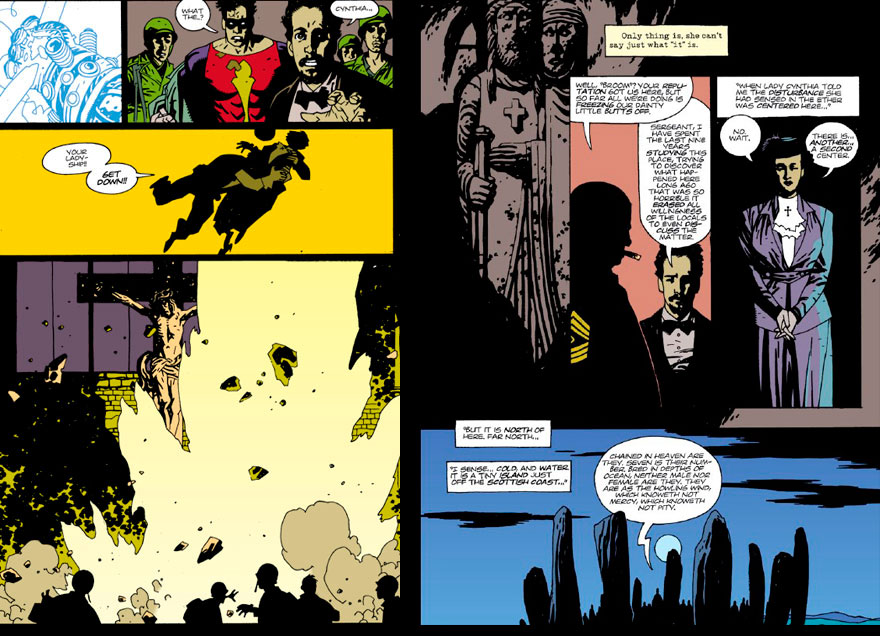 Material from Mike Mignola’s supernatural adventure series Hellboy, previously released as ‘floppy’ comic books and later as paperback reprints by Dark Horse Books is presented in the Hellboy Library Editions in oversized archival volumes with heavy paper and cloth hardcovers. Each volume reprints two complete trade paperback collections and supplements the complete stories with pages of annotations and commentary, sketches and other additional material by Mignola, some of which is exclusive to these volumes.

Volume one of the Hellboy Library Edition collects Seed of Destruction, the first Hellboy book, written by John Byrne and drawn by Mike Mignola, and the second book, Wake The Devil, written and drawn by Mignola alone.

Seed of Destruction features the first appearance of Hellboy from the moment he arrives on Earth as a child, summoned by Nazis and an undead mystic to appear in smoke and lightning in a ruined English church. How he got here, where from and why are questions that get answered, but not completely, as Mignola introduces us to the Bureau of Paranormal Investigation, a government agency which in an ‘X-Files’ style deals with mysterious or alien incidents.

In Wake the Devil, Hellboy accompanies his B.P.R.D. colleagues to Romania to hunt down the aristocratic vampire Giurescu, a creature so powerful that the Nazis tried to use him as a weapon to win World War II. Through the requisite ruined castles, collapsing floors, exploding Zinco machinery and sundry monstrous foes, we finally find out what those things are on Hellboy’s forehead.

This is the perfect starting point for anyone wanting to see Hellboy‘s beginnings, with plenty of additional material to supplement the first two adventures. At a very reasonable price point for such a well-designed collection of nearly three hundred pages of large-format colour art, these editions are the definitive way to enjoy the series and present great value for dedicated Hellboy fans.