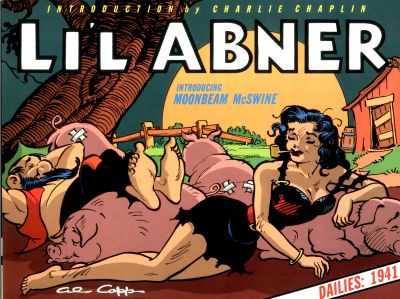 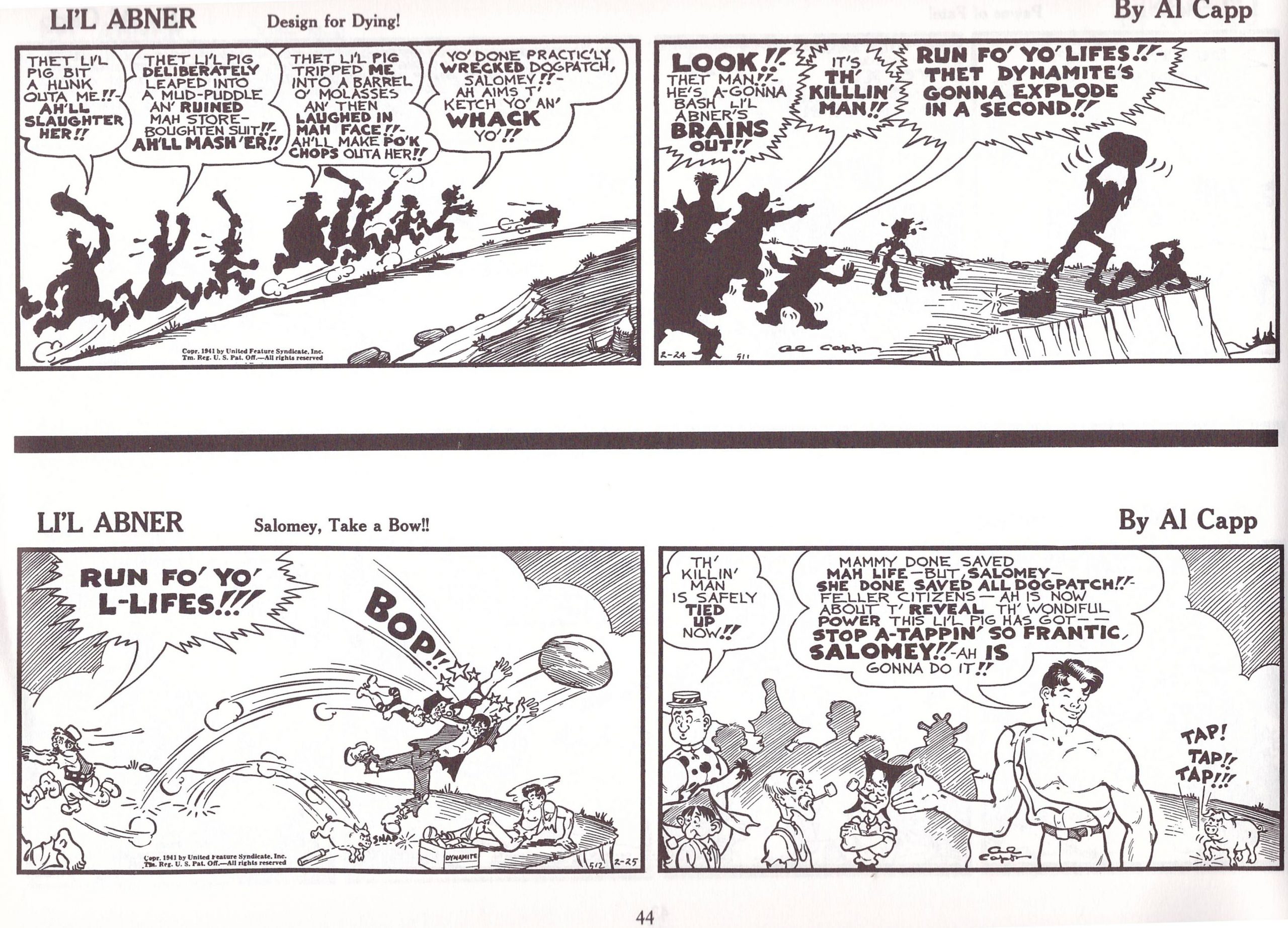 To stand out as eccentric in Dogpatch, you’ve really got to make the effort, but in 1941 Al Capp introduced Moonbeam McSwine, the glamour girl who’d rather be with her beloved pigs. Visually she’s Daisy Mae with dark hair, and she became so popular that she was painted on the nose cone of a Mustang Bomber in 1943, that Li’l Abner’s Wikipedia page notes was still regularly appearing in early 21st century air shows.

Before we meet her, though, there are several other plots to work through. We discover Abner’s crooked doppelganger Gat Garson looks like Abner because his parents look exactly like Mammy and Pappy Yokum, and that Salome the pig can communicate in morse code. Moonbeam makes her appearance because her father Moonshine has learned Abner now has a fortune of $40. In order to lure Abner into her company he bemoans his poor daughter is in possession of more pork chops than she can possibly finish herself, having invested his life savings to buy them. It’s an example of the inventively ridiculous buffoonery that Capp was regularly funnelling into Li’l Abner by 1941, and plenty more follows with some stunningly staged gags that still hold up. The Scraggs acquiring scout uniforms is a lesson in compact comedy, and Capp is bold enough to turn the strip over to their atrocities for twelve consecutive days.

He started off well, but six years further into his career most of Capp’s strips are now beautifully composed. The sample art contains some great silhouettes and shows how far Capp has come with regards to the amount of people in a panel without that panel looking cluttered and unattractive. The sample strips are only two panels to the tier, but it applies equally when Capp uses more panels. His storytelling has also become far broader. It’s noticeable that 1941’s output limits the length of a plot. These will no longer run on for months, and without having to sustain twists Capp can supply unpredictability by other means, although a month’s continuity for Sadie Hawkins Day is the exception. Those other means can involve returning to old plots, such as Abner having to raise money as he did in Volume Three, but the more experienced Capp produces a superior version, returning some people Abner met last time, but the locations are now more varied.

Abner has a right old time of it in 1941, falling into being a sculptor’s model, becoming the personification of a radio superhero, having his strength drained by a mad scientist and having to become a bullied shoeshine boy. And that’s only the first half of the year. Capp later works in appearances for film stars and has Abner meet a princess.

There have been misgivings about Li’l Abner until now, with the charm and laughter coming in increasing doses, yet among weaker material. This 1941 collection raises the quality level considerably, and ends with the mystery of why Abner’s calling himself Cherry Blossom. We’ll find out in Volume Eight.