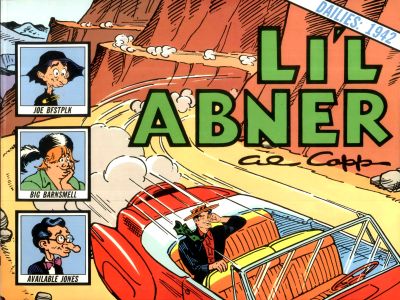 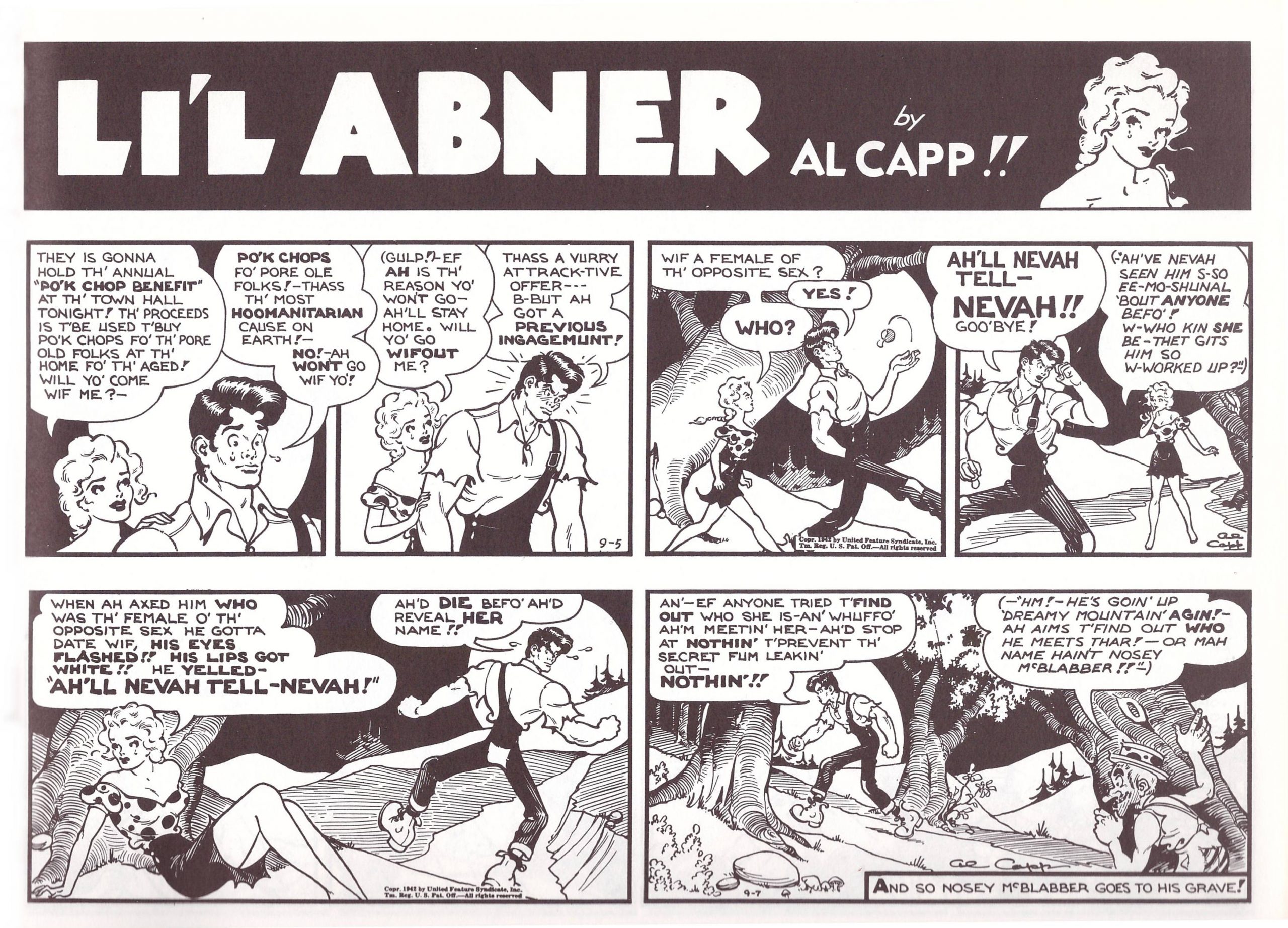 There’s an immediately noticeable visual difference to this landscape volume continuing Li’l Abner’s adventures from late 1941, as seen by the sample art. Whereas each daily strip was previously titled, Al Capp obviously dispensed with that nuisance, and Kitchen Sink’s pages now each have a huge ugly and distracting title banner. Get used to it as it’s there for the next three collections.

When we left Li’l Abner at the end of 1941’s continuity he was telling people his name was Cherry Blossom. What could be behind it? Perhaps psychiatrist Dr Jekyll will get to the bottom of it. He proves a character who doesn’t live up to his name, but Capp’s creative streak hardly grinds to a halt in 1942, the year when he committed wholeheartedly to surreal slapstick as his guiding force. Over one six day sequence he has Abner head-butting a bull down in Mexico before becoming a passenger in the world’s first remote control car. The new characters keep coming as well. Early on we meet Available Jones, who’ll do anything for anyone in Dogpatch… for a price, and who operates from a comical log shack. Capp mines comedy dialogue from his name alone, and other names continue to be as evocative. Among them we have Available’s cousins Disgusting, Embraceable, Unbearable and Unmentionable. Then there’s Big Barnsmell, a return for Marryin’ Sam and Moonbeam McSwine, Dinsmore Jerque, Beerbarrel Polkis, Nosey McBlabber and the best name of all provided for a prize pig: Boar Scarloff! He lacks a memorable name, but there’s a reason Joe Bfstplk leads off the cover illustrations despite just a cameo introduction here. The world’s worst jinx would become a regular recurring problem.

One aspect from which Capp derives continuing mileage is the painting of Daisy Mae completed in Volume Two, which returns far more often than might be expected, here the inspiration for an accident victim’s facial reconstruction. It leads to yet another plot of Daisy Mae almost married. Them thar ornery Scraggs is also back for a few more bouts of comedy violence, and a little over a month’s worth of continuity is devoted to the shenanigans of Sadie Hawkins Day.

In July there’s an interesting strip. When the USA became involved in World War II many newspaper strip creators had their characters join the armed forces to display their patriotism, and Capp explains over two panels of hand written letter exactly why Li’l Abner won’t be signing up. It’s pleasing and logical, and prevents him having to adjust his strip to encompass real world problems.

Capp’s art has now hit a cartooning peak, the personality positively oozing from the sample strips, and the variety of expressions he supplies Abner cover all moods. The great names are accompanied by equally great character designs, and still funny comedy. Capp is finally following his own muse rather than compromising for what he feels readers want, and the glory years start here. Wonder no more why Li’l Abner captivated millions of Americans for decades. Volume Nine is even better.