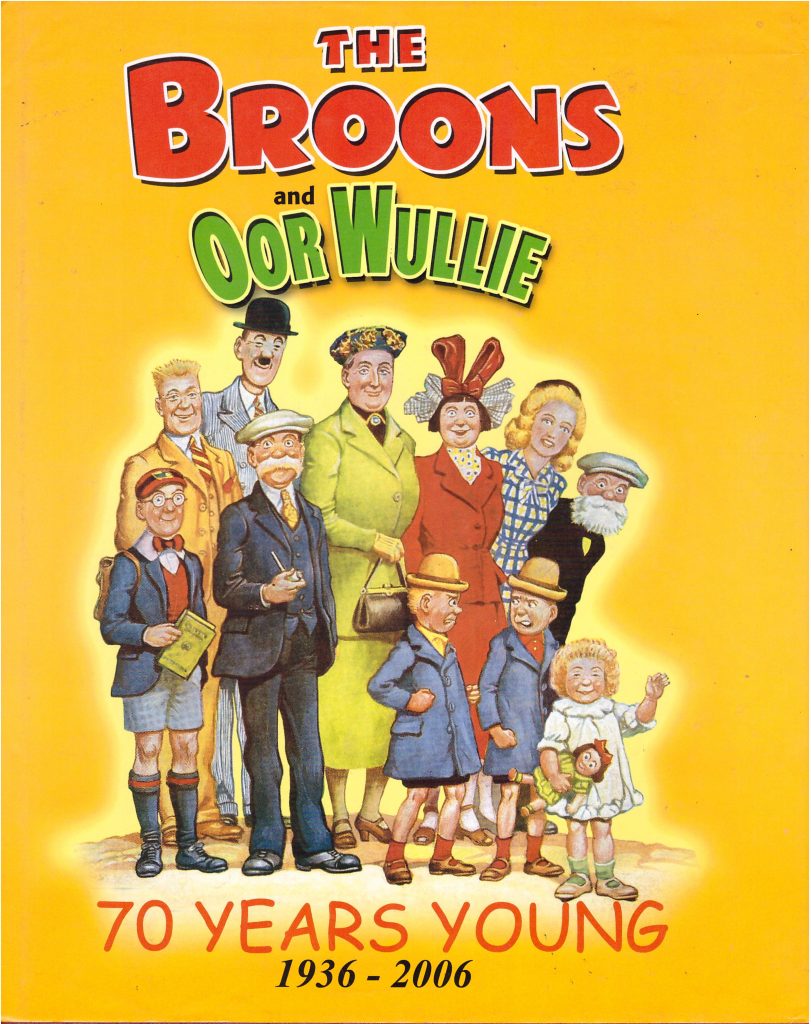 With both The Broons and Oor Wullie celebrating their seventieth anniversary in 2006, it made sense for publishers D.C. Thomson to theme their annual hardcover reprint book as a celebration of this longevity. It differs, however, from almost all others in the series by actually featuring work extending beyond the final contributions of Dudley D. Watkins in 1969. The final quarter of the book reprints the work of Peter Davidson (sample art right), Tom Lavery, Bob Nixon, and the uncredited “RN”, with artist for most of the 1990s Ken Harrison actually signing his strips as “Ken H. Harrison” in tribute to Watkins (sample art left).

The later work differs, particularly Oor Wullie, dropping down to under ten panels in some cases, whereas Watkins used up to twenty to present a series of gags. The result is a lesser density to strips that don’t take as long to read, and more resemble the one page comedies of The Beano and The Dandy. It’s not as noticeable for The Broons, where Watkins frequently used fewer panels, not least to accommodate the large cast, but primarily as the template was a progression toward a gag finale rather than a succession of jokes. All the later artists are good cartoonists, with Harrison and Nixon the best at capturing Wullie’s essentially genial character as he gets up to his escapades.

That leaves three quarters of the book to Watkins’ strips, and a marvel of the presentation is witnessing the evolution of his style. His storytelling skills are evident from the start, but the looser 1930s pages are well removed from the far tighter and more detailed strips he was producing twenty years later. The characters, however, evolve very little over Watkins’ tenure, with only some fashion concessions for the glamorous Maggie differentiating the 1930s versions from the 1960s. Wullie remains timeless, but Harrison evolves the Broons slightly. One notable Watkins strip, though, takes us back to the Edwardian days with Pa and Maw Broon courting.

As the brief of both strips has always been to reflect lives recognisable to a broad selection of Scotland, the strips provide a fascinating social documentation, glimpsing into the past with its conditions and devices. One strip centres on Ma Broon’s need for a replacement mangle, Wullie has both the technical knowledge and access to materials to construct a form of functioning cannon, circuses come to town, and the local policeman is a feared instrument of local justice known to the entire community.

It’s a shame so few writers are credited, as there are some prime jokes deserving attribution. It’s likely the strips’ co-creator Robert D. Low wrote almost everything here until the mid-1950s, and Morris Heggie wrote from the 1990s, which still leaves much of the book down to unknown jokesmiths. It’s a shame, but this is otherwise a slight step away from the usual selection of strips in the series, but with enough quality Watkins art spanning thirty years to keep everyone happy.