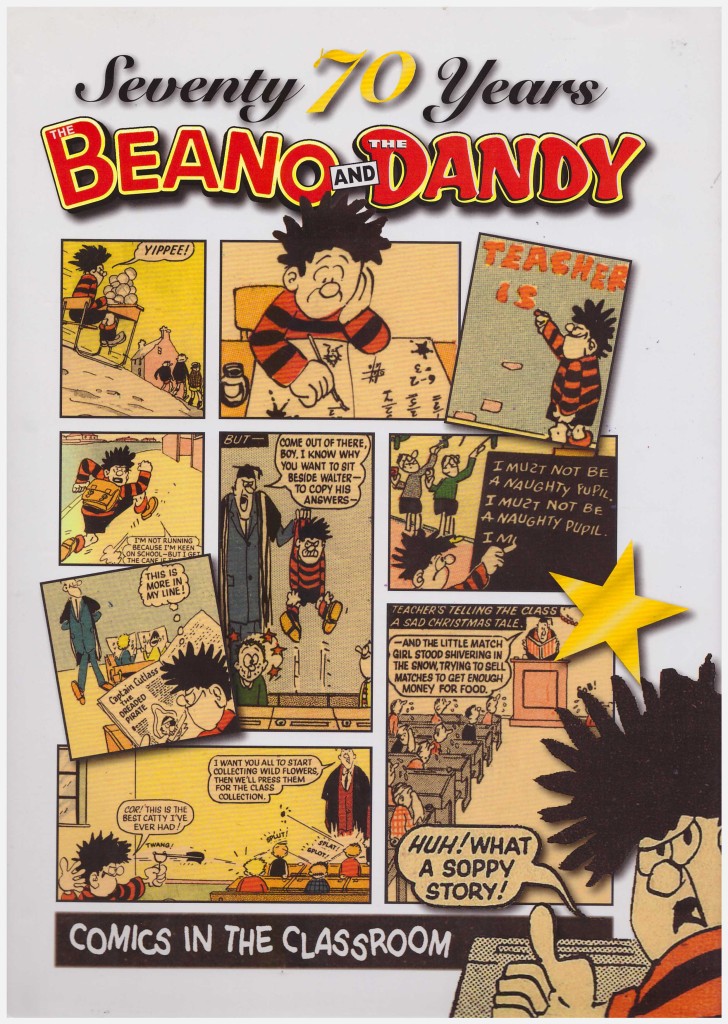 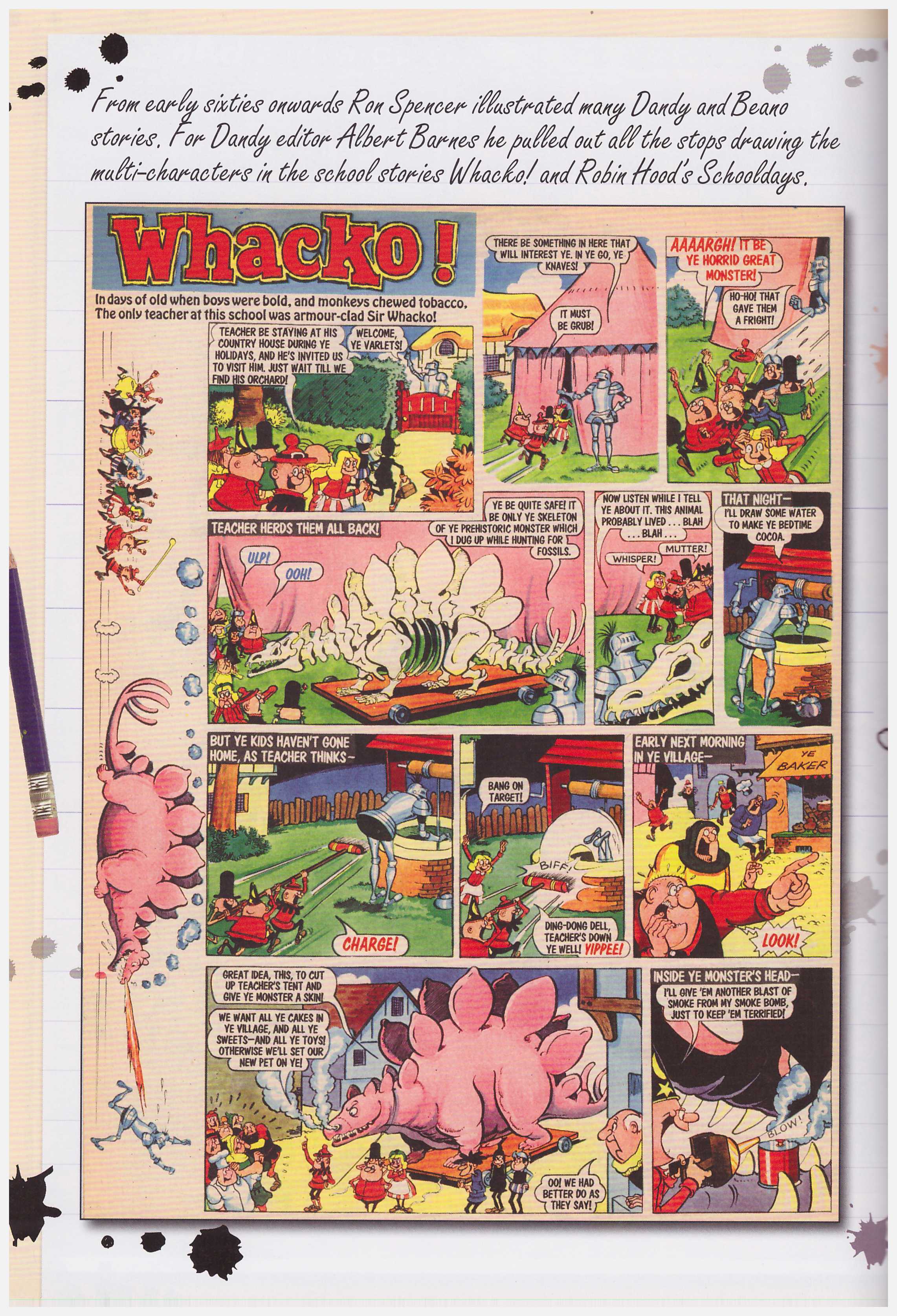 As D.C. Thomson continued to issue reprints culled from decades worth of Beano and Dandy comics they responded to the concerns of the fans and historians among their audience. Earlier collections completely omit the names of creators, but this book is very welcome in identifying not only those immediately recognisable from their art. Thus we have pages of work from Leo Baxendale, Davy Law and Dudley D. Watkins, yet time is taken to acknowledge the work of those not as well known, among them Eric Roberts and Ron Spencer (sample page).

What further marks this as a book aimed more at the collector’s market is the strip reproduction being in many cases not from old comics, but from the original art, complete with pencil markings, white-out, colour notes and lines not seen when originally published. In the case of Watkins these are best viewed on a packed spread of super strong kids trained by Desperate Dan. Law, notorious for his patches and white-out, is largely represented by the printed pages.

Many of the earlier stories are resolutely of their times, both in terms of what was considered funny, and what was socially acceptable, the latter exemplified by children being regularly beaten for misbehaving. Occasionally an idea that might seem completely passé worked when modified, such as the 1940s text and illustrations stories of Jimmie’s Pocket Grandpa being revived for Pete’s Pocket Grandpa in the 1970s. More than anything, though, the strips showcase Britain’s class divide, with the privileged class children depicted in uniforms of top hats and bow ties, this extending to Watkins’ long-running Lord Snooty strip presenting a more acceptable and understanding member of the upper classes. It was Baxendale’s Bash Street Kids that finally broke the system, presenting unruly and resolutely working class children, the very name of their school indicating their origins. His strips are anarchic and kinetic, and while the earlier work of Roberts and Watkins can be admired, Baxendale presented kids going wild.

Other strips offered range from the completely forgotten Miss Prim and the rhyming escapades of Billy Butler, the School Goat (who really was a goat) to the long-running Winker Watson. Roberts’ strip is noted as the only one ever to top Desperate Dan in popularity polls, and again focusses on kids at boarding school with Watson always a step ahead of the teachers and maintaining a record of never being caned despite his escapades. It’s obviously influenced by the Billy Bunter books, but creative, and among the examples is a fantastic spread by Roberts of the kids escaping school in winter. That, though, is among many strips that really force the jokes into improbability. Our Teacher’s a Walrus? Really?

Some readers not conversant with Scottish culture will have to look up terms used, such as ‘dux’, the topic for an extremely forced Biffo the Bear strip, but that’s no bad thing.

There are such a wealth of strips available that limiting the selection to those based around schools doesn’t produce repetition. There’s also room for some rarities not quite meshing with the theme, such as the never printed final instalment of The Jocks and the Geordies (British regional rivalry) and a 1980s Bananaman effort promoting dental health.

Cloth bound and dust jacketed, this may not entertain 21st century kids throughout as once the content might have done, but surely Baxendale transcends his era. Otherwise there’s enough fascination for adults to make this a worthwhile purchase given the current prices online for used copies.