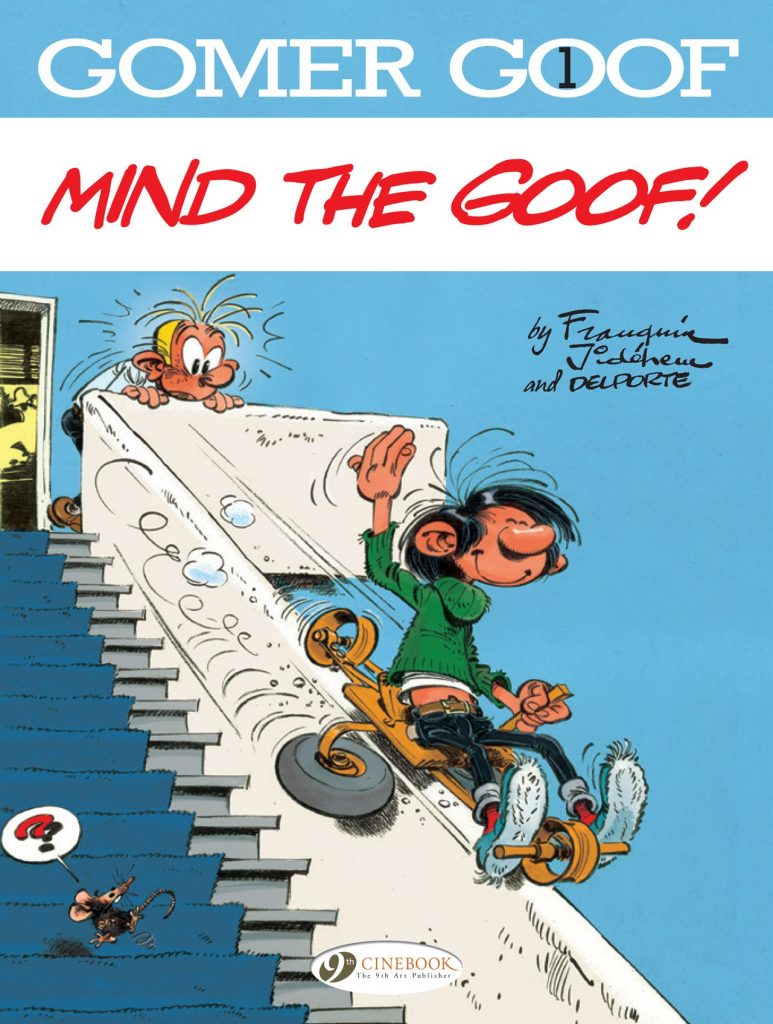 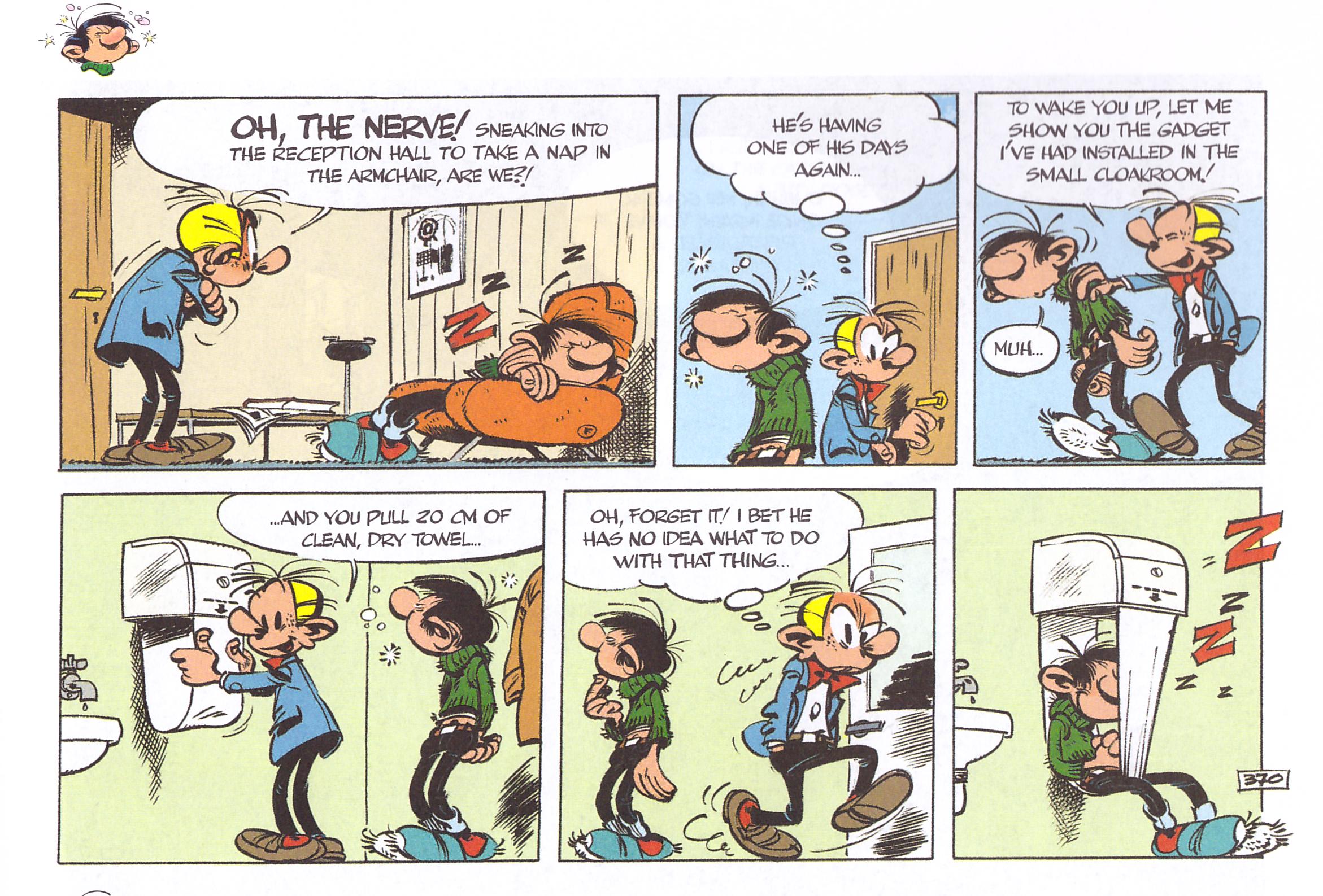 In Franco-Belgian comics it’s Hergé whose work is held in the highest regard, yet Hergé himself considered André Franquin a superior artist. That’s a matter of taste. They’re both excellent, but Franquin’s thicker ink line and unrestrained approach is the polar opposite of Hergé’s control. Yet the first Angoulême festival in 1974 awarded Franquin its grand prize. By then he’d being he’d been drawing comics for almost thirty years, and his greatest creation was Gaston Lagaffe, now translated by Cinebook. We should be very grateful, despite Gaston being billed under the altogether less appealing name of Gomer Goof, a hangover from the time a few Gaston strips appeared in a 1980s American anthology title.

Whatever the name, the work speaks for itself. Cinebook have correctly decided to avoid the sometimes awkward early work, and head straight for the start of classic period Gaston, picking up in 1965 (although even in France it was 1967 before the collection appeared). By that time he’d been running for eight years, portrayed as the office junior at Spirou, the magazine that hosted Lucky Luke, Buck Danny and the Smurfs among other long-running series. The good natured Gomer is idle, yet a tireless tinkerer, astoundingly inventive, forever creating ever more incredible devices that inevitably either go wrong with serious consequences, or work perfectly well until disturbed. Having already worn out one boss, by 1965 it’s Fantasio, from the Spirou and Fantasio strips, who’s Gomer’s boss, endlessly infuriated by him, yet also charmed and occasionly intrigued.

Franquin is as creative as Gomer in conceiving the outrageous machines and their application, and by this time the primary recurring cast are in place. In addition to Fantasio there’s Miss Jeanne, the pretty office secretary with whom Gomer has a friendly relationship; Mr Mesmaeker, forever turning up at the office with important contracts to be signed, and forever the victim of Gomer’s latest device; Officer Longtarin, a police officer eventually formalised after so many were required for the strips, and while not human, few would deny Gaston’s converted 1930s Fiat taxi cab a place among the supporting cast. Still recently acquired in 1965, but perpetually clapped out, Gomer’s modifications are frequently applied.

Are these half page gags still funny fifty years after their creation? Emphatically, yes. As with all gag strips, not every episode is gold, but Franquin, with occasional help from Yvan Delporte, hits the target far more often than not, and with his beguiling cartooning the job is half done before any reading starts. For someone who’s perpetually slouching, there’s a fantastic sense of movement about Gomer. Franquin stretches him into wonderfully comic shapes while accentuating his large hands and feet, and he’s a brilliantly intuitive cartoonist. Down to the background characters he lets you know how his cast feel. Also credited is Jidéhem (Jean De Mesmaeker – known by a French pronunciation of his initials, as was Hergé), here for backgrounds, but he’d later illustrate many of the strips himself working from Franquin’s layouts.

As well as gag scripts, Franquin would also write little text pieces about Gaston, as if newspaper or police reports, and their inclusion drags the star rating down for their frequency. The skill of Franquin’s half page and subsequent full page strips was being able to hone in on a gag concisely with precision. Some of these text pieces ramble. At the asking price, however, you’re getting more than enough prime material from one of the world’s greatest ever cartoonists, and that’s more than good enough. A second volume, It’s a Van Goof, follows. 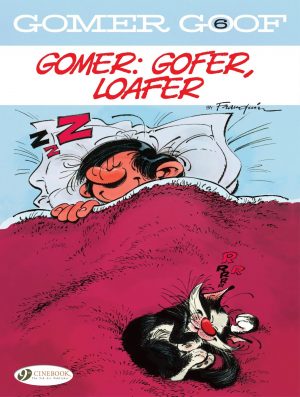 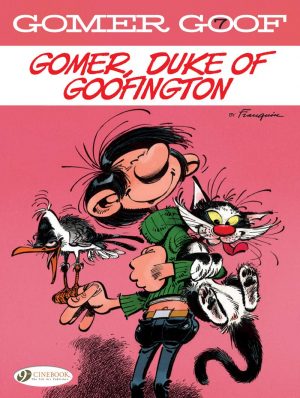