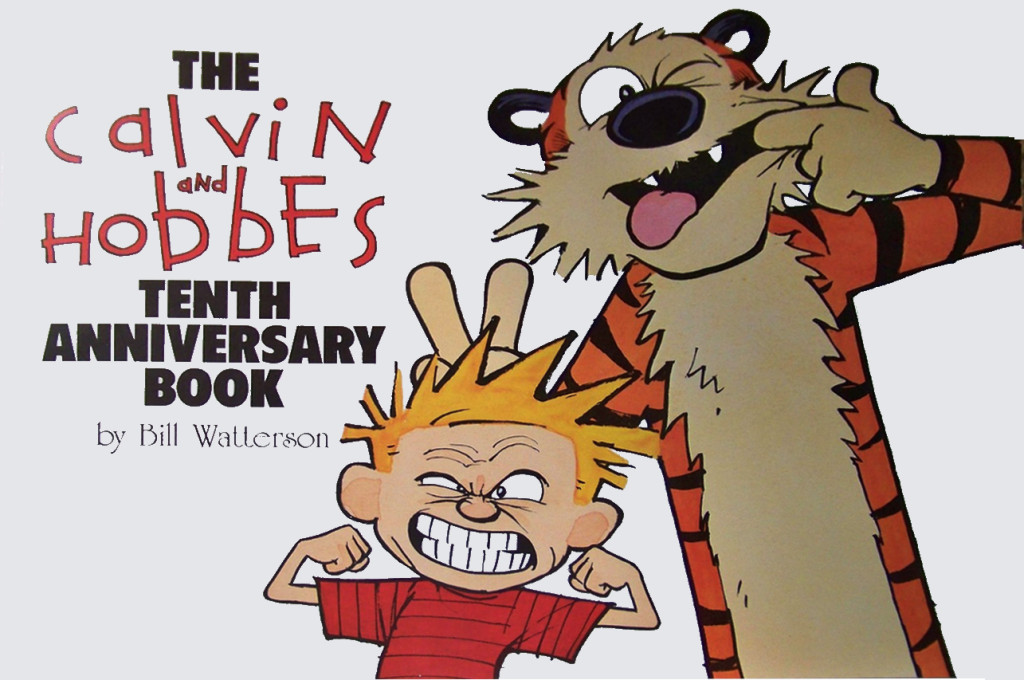 The Calvin and Hobbes Tenth Anniversary Book is a 200-page collection of daily and Sunday strips chosen by Bill Watterson from ten years of his classic newspaper comics. There is no new work in this assortment, but fans will still love this book because Watterson introduces his selections with anecdotes, and many of the strips have commentaries ranging from one line to paragraphs explaining the ideas and memories that inspired a particular sequence. His ‘biographies’ for his cast–Calvin, Hobbes, Calvin’s parents, Suzie, Miss Wormwood, Moe and Rosalyn– are brilliantly informative and funny. Those alone would make this a great purchase but even better is the sixteen page introduction, where he writes about the history of his strip and some of the thinking behind his choices, in particular the two famous battles that he fought with his syndicate over licensing, and then with newspaper editors over the layout of his Sunday strips.

Many people (including Charles M. Schulz) did not understand Watterson’s refusal to license his characters for advertising and merchandising. Their view is that a strip is a commercial product. It’s designed to sell newspapers, by attracting readers and advertisers, so licensing is just a natural extension of that function. That was not how Watterson saw it. As far as he was concerned, the complex world he had created in Calvin and Hobbes relied on ambiguities that would be destroyed if they were ever taken outside of his control. “The world of a comic strip ought to be a special place with its own logic and life. I don’t want some animation studio giving Hobbes an actor’s voice, and I don’t want some greeting card company using Calvin to wish people a happy anniversary, and I don’t want the issue of Hobbes’s reality settled by a doll manufacturer.” With millions of dollars at stake, the syndicate was determined to push the deal through. When Watterson decided to quit rather than go ahead, “the syndicate agreed to renegotiate my contract, the exploitation rights to the strip were returned to me, and I will not license Calvin and Hobbes.” From what he reveals here and in his essay in The Complete Calvin and Hobbes Box Set it’s evident the bitterness of this fight killed a lot of his enthusiasm for his work.

The other issue was the fixed layout of strips in all Sunday newspapers, requiring creators to essentially waste half their already limited space on panels that could be edited out if papers wanted to make room for other features. Watterson’s solution for the formatting problem (beginning in the eighth book The Days are Just Packed) was a complete and un-editable half-page unit – which made some editors angry enough to drop the strip rather than be compelled to run something they couldn’t change. The new format allowed Watterson to create such obviously superior material that one can only be amazed at the short-sightedness of those newspapers unable to see what they were losing.

The Calvin and Hobbes Tenth Anniversary Book is an absolutely essential purchase for any fan of this series, allowing readers a rare peek at the man behind the curtain: “The trick to writing a comic strip is to cultivate a mental playfulness–a natural curiosity and eagerness to learn. If I keep my eyes open and follow my interests, sooner or later the effort yields questions, thoughts and ideas–unexpected paths into new territory. Like Calvin, I just head out into the yard in search of weirdness, and with the right attitude, I make discoveries.”