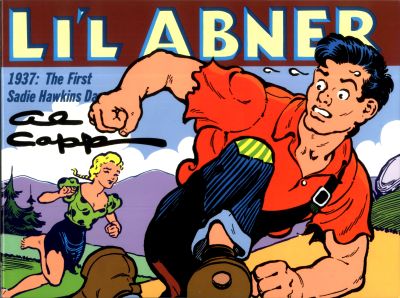 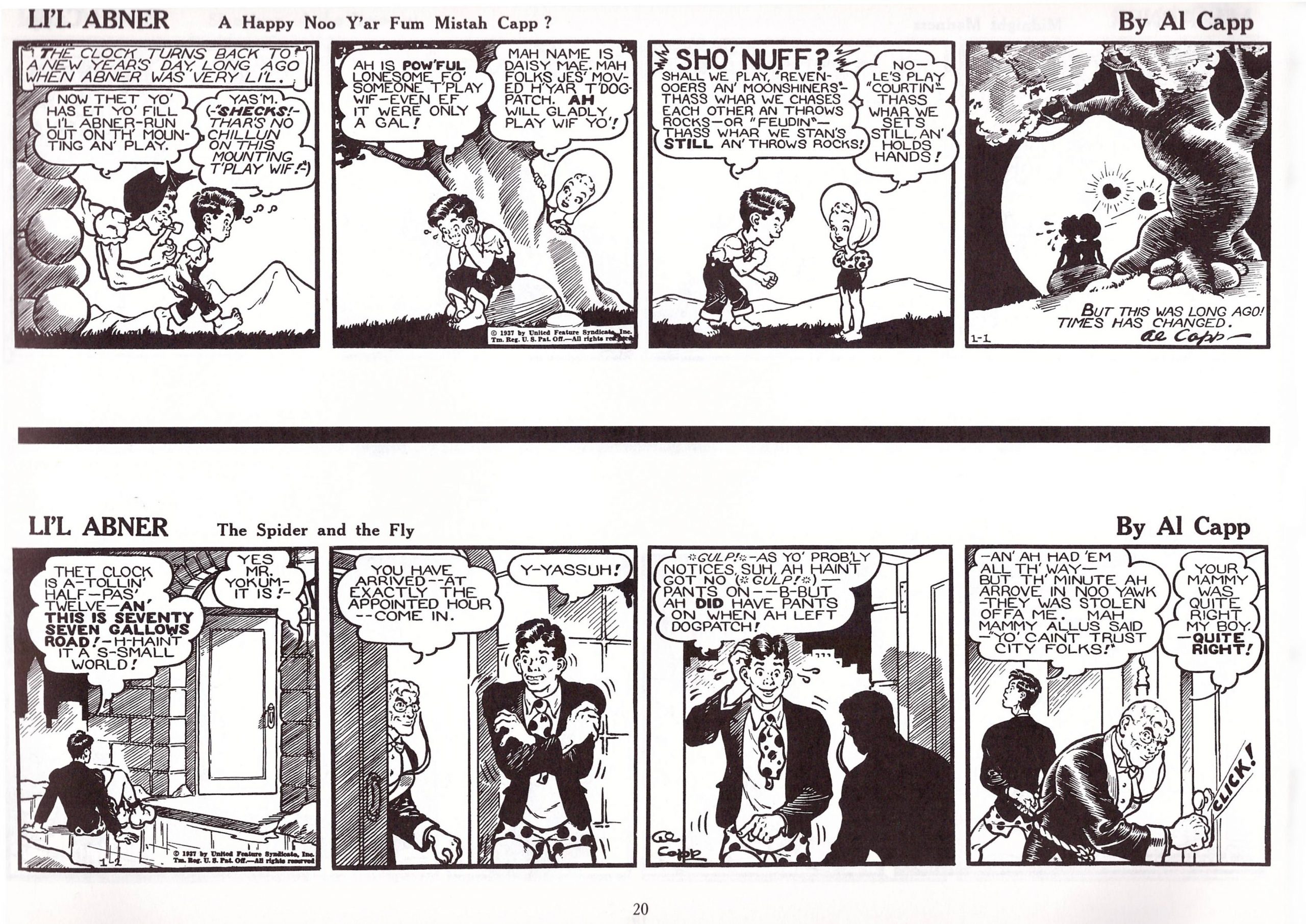 By 1937 there was no doubting Li’l Abner’s popularity, and although it would be another decade before the appearance of the imitators dealt with in Dave Schriener’s introductory article, millions of readers wanted their daily fix of Al Capp’s hillbilly comedy drama. Capp concocted an amiable mix of likeable and well drawn, eccentric characters, a formula for suspense, and what for the time were polished gags. That they, and some situations, might not seem so to modern readers is in part due to Capp’s innovations being recycled by others over the years, becoming common currency and diminishing the originality. However, 1937 saw the introduction of some indisputable originality in what became a much-loved annual tradition, imitated in real life: Sadie Hawkins Day. Capp would gradually build a greater mythology around the event, but here it’s still a relatively simple chase occurring every November, entitling unmarried women to solve that situation if they manage to run down the man of their choice.

That, though, is toward the end of this selection, through which Capp’s individuality shines through far more, continuing from Volume Two‘s December sign-off by beginning with the insane Christmas Day strip of a muscular Santa rescuing Pappy Yokum. There’s a greater madcap inventiveness to situations, as if Capp has previously been restraining himself, but now feels confident enough to stray from convention, and a succession of farcical ideas raise a smile. January 1937’s output, for instance, features a crook extremely stunted of stature and his cross-dressing partner, not too far removed from the Krankies in concept. Improvement is also apparent in the art, where the previously proportionate boots Abner wears now merit being labelled bigfoot cartooning.

Capp letting go really ups the comedy content, and over the volume we meet versions of Abner’s ghost, his new wrestling personality and a two month sequence where Abner’s daily bank balance is noted. That’s in addition to a return for the Scraggs and their determination to make good on a centuries old feud by wiping out the Yokums. It’s ingeniously ended, yet so much about these adventures are ingenious. Noting the daily bank balance is in service of a story where Abner needs to raise $100,000 to buy back Dogpatch, a scenario Capp will repeat. It creates suspense to accompany the constant misfortunes of the naive Abner, amusingly rooked at almost every turn, including buying the Brooklyn Bridge, yet inevitably repaying the absolute faith his community have in him. The satirical content is also increased, an early example being the truth about vain movie star Leslie Love with brief radio commentary from Hollywood gossip Walter Pinchwell. It’s very broad, but neatly worked in as a plot engineered to bring Daisy Mae to New York.

The introduction of Sadie Hawkins Day is preceded by several weeks worth of continuity with readers again having to wonder if Li’l Abner is going to be married, and the less enticing, but thankfully shorter knockabout comedy of Abner attending a girls school. That’s of the era, but discounting the dubious nature of Sadie Hawkins Day, the sequence remains funny, and leads to a surprisingly tragic cliffhanger to be resolved in Volume Four. Plus, as per the sample art, we see Li’l Abner when he genuinely was Li’l.

While the first two volumes of Li’l Abner showed a talented cartoonist improving and providing an occasional laugh that’s survived the years, this selection has far more going for it.