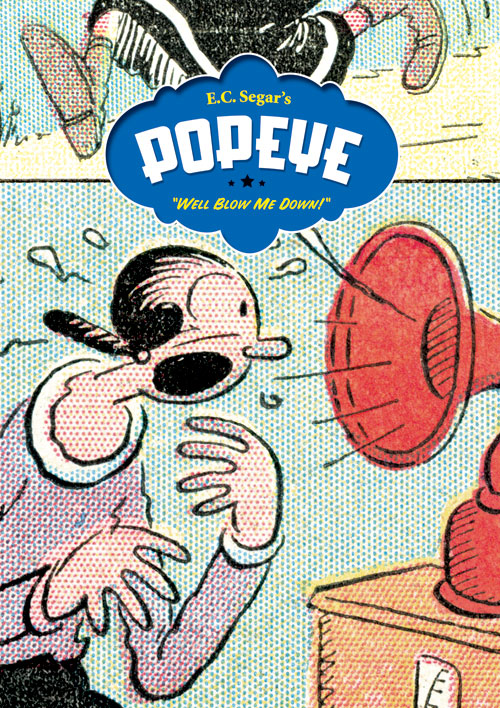 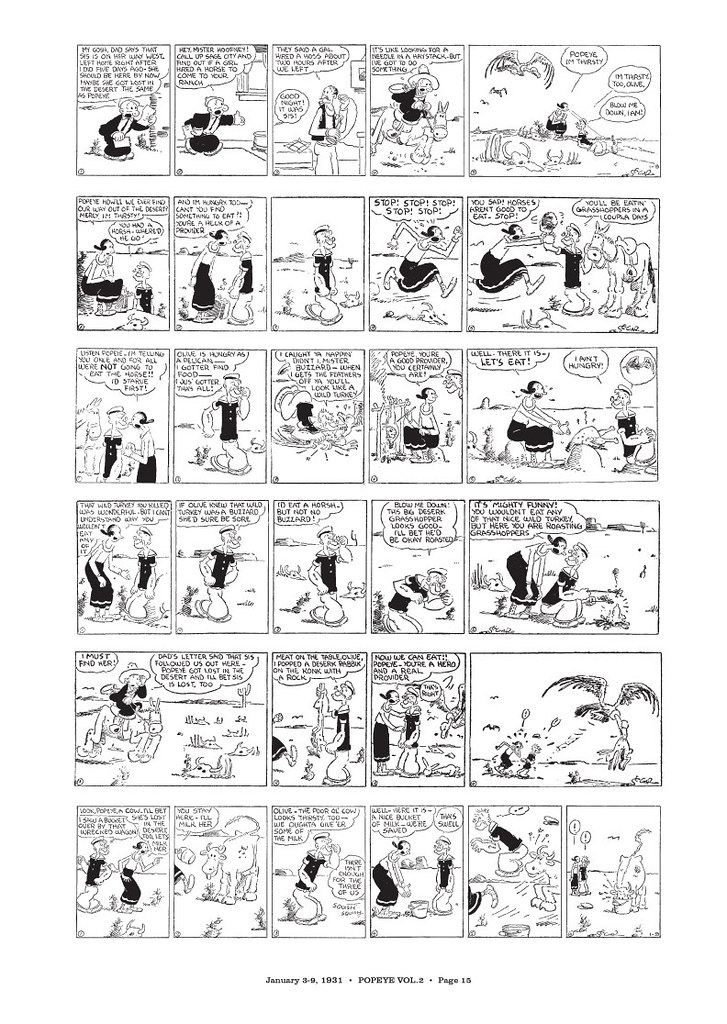 Born storyteller E. C. Segar laboured in relative anonymity on Thimble Theater for a decade until finally conceiving a superstar. In 1929, Popeye the sailor, brusque, incoherent, pug-ugly and stingingly sarcastic, shambled on stage midway through ‘Dice Island’, (see Volume 1: “I Yam What I Yam!”) and once his part was played out, simply refused to leave. Eventually the strip title was changed to Popeye and all the old gang except Olive Oyl were consigned to oblivion. The near decade of funny thrillers that followed revolutionised the industry, laid the groundwork for the entire superhero genre (but sadly, usually without the leavening underpinnings of Segar’s self-aware humour) and captivated the whole world.

These superb hardback collections are the perfect means of discovering or rediscovering Segar’s magical tales. The second huge volume (almost 14 ½ by 10½ inches) features black and white dailies from December 22nd 1930 to June 6th 1932, and see Popeye, Castor and Olive in the fabulous western spoof ‘Clint Gore, the Outlaw’. They strike a blow for the Depression-era poor by inventing a financial institution that gives money away in ‘A One-Way Bank’, before resuming their globe-trotting adventuring in ‘The Great Rough-House War’ and its immediate sequel ‘Tragedy in the Land of Saps’. This classy screwball epic displays Segar’s trenchant satirical skill as well as broad slapstick, and has glorious overtones of, if not actual influences upon the Marx Brothers gem Duck Soup. With an initially reluctant Popeye compelled by his sense of duty to become King of the unlovable Nazilians, it’s also where the superman sailor reveals for the first time the strength inducing properties of spinach.

The Sunday Popeye strip continues the uproariously violent boxing career of the one-eyed sea-dog, who takes on all exceedingly monstrous comers, including the awesome man-mountain Tinearo, Kid Klutch (a giant gorilla) and even a robot boxer. When not beating the stuffing out of his opponents Popeye pursues the flighty, vacillating and irresolute Olive with desperate verve, if little success, but his life is forever changed when the adorably contemptible J. Wellington Wimpy arrives.

The engaging coward, moocher and conman debuted on May 3rd 1931 as a referee, but obviously struck a chord with Segar who gradually made him a (usually unwelcome) fixture. Always ravenous, ever happy and eager to take a bribe, he utters the first of many immortal catchphrases on June 21st: “I would gladly pay you Tuesday for a hamburger today”, actually started as “Cook me up a hamburger, I’ll pay you Thursday”. There’s far more of Wimpy’s incredible presence in Volume 3: “Let’s You and Him Fight”.

Another aspect of Popeye’s complex character is revealed in an extended sequence running from May 29th 1932. The sailor was a rough-hewn orphan, who loved to gamble and fight, but also big-hearted with an innate sense of decency. When a starving little girl tries to sell him a flower he takes her from the brutal couple using her in a begging racket. He grows to love her and there’s a genuine sense of happy tragedy when he gives her up to her real parents. That such a rambunctious, action-packed comedy adventure serial could so easily turn an audience into sobbing, sentimental pantywaists defines how great a spellbinder Segar is.

These tales remain vibrant and compelling, and despite some astounding successors in the drawing seat, no one has ever bettered Segar’s Popeye. These superb volumes are books you’ll treasure for the rest of your life. Don’t miss them.