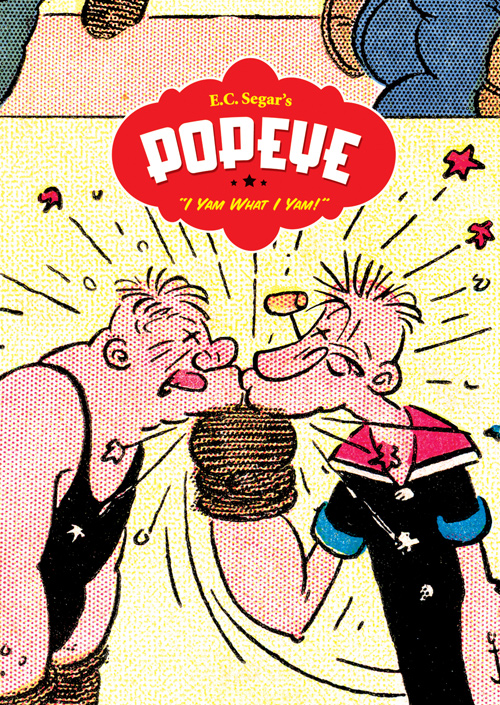 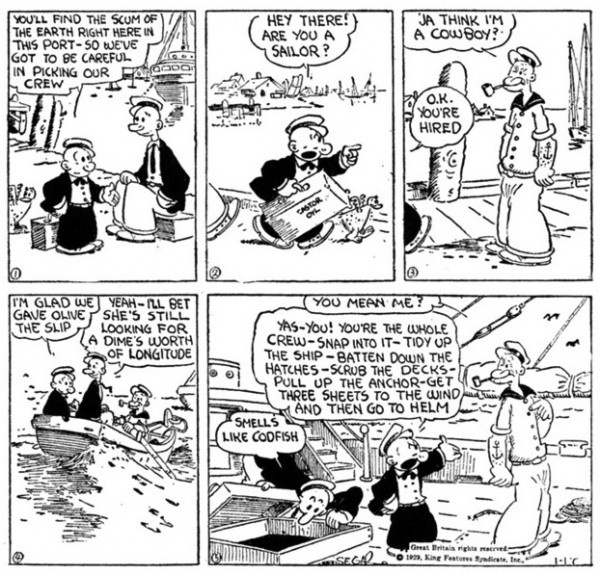 Thimble Theatre began on 19th December 1919, just one of many newspaper features that parodied/burlesqued/mimicked the silent movies of the era. These used a repertory company of characters for generic adventures based on cinema antics of the silent era. Thimble Theatre’s cast included Nana and Cole Oyl, their gawky daughter Olive, diminutive-but-pushy son Castor, and Horace Hamgravy, Olive’s sappy, would-be beau.

The series ticked along for a decade, with Castor and Ham Gravy, as he became, tumbling through get-rich-quick schemes, gentle adventures and simple gag situations until September 10th 1928, the first strip reprinted in this astonishingly lavish and beautiful collection. In that Castor acquires a hand-reared Whiffle Hen – most fabulous of all birds. It began something groundbreaking.

Bernice the Whiffle Hen possesses fantastic powers, and clearly affected writer/artist E. C. Segar, because his strip increasingly became a playground of frantic, compelling action and comedy. When Castor and Ham discover the Whiffle Hen can bestow infallible good luck, they sail for Dice Island to win every penny from its lavish casinos. It was 16th January 1929…

As seen in the sample art, the next day, in the 108th instalment of the saga, a bluff, irascible, ignorant, itinerant and exceedingly ugly one-eyed sailor was hired to man Castor and Ham’s boat, and the world met one of the most iconic and memorable characters ever conceived. By sheer, surly willpower, Popeye won the hearts and minds of every reader. His no-nonsense, grumbling simplicity and dubious appeal enchanted the public until his walk-on had taken up full residency.

The journey to Dice Island is terrible: Olive stows away, and Popeye, already doing the work of twelve men, does not like her. After many travails, Bernice succeeds and Castor bankrupts Dice Island. Once home, newfound wealth quickly leads to constantly circling carpetbaggers, conmen and ne’er-do-wells, and before long the money is lost, but they couldn’t lose their sea-dog tag-along. The public – and Segar himself – were besotted with the unlovable, belligerent old goat. After an absence of 32 episodes Popeye shambled back on stage, and stayed for good.

Segar famously considered himself an inferior draughtsman – most of the world disagreed and still does – but his ability to weave a yarn was unquestioned and grows to astounding proportions in these strips. Day by day Segar created the syllabary and graphic lexicon of a new art-form, inventing narrative tricks that a generation would copy, and did it while being scary, thrilling and funny all at once.

‘The Black Barnacle’ introduces the hideous Sea-Hag – one of the greatest villains in fiction – and scenes of her advancing in misty darkness upon our sleeping heroes are still incredibly effective. This incredible tale leads seamlessly into diamond-stealing, kidnappings, spurned loves, and an African excursion. The black and white dailies section ends with ‘The Wilson Mystery’ as Castor and Popeye set up their own detective agency.

On the colour Sunday pages Segar concentrated on more family-friendly gags, and eventually continued mini-sagas. It was here that the Popeye/Olive Oyl romance began: a series of encounters full of bile, intransigence, repressed hostility, jealousy and passion, usually ending in raised voices and scintillating cartoon violence. They are as riotously funny now as then.

Popeye is fast approaching his centenary and still deserves his place as a world icon. These colossal hardcover albums volumes are the perfect way to celebrate the genius and mastery of E.C. Segar and his brilliantly imperfect superman. They offer 200 pages at 368 mm by 268 mm, and are augmented with fascinating articles and essays; including testimonial remembrances from famous cartoonists – Jules Feiffer in this first volume. “Well Blow Me Down” picks up the continuity in late 1930. 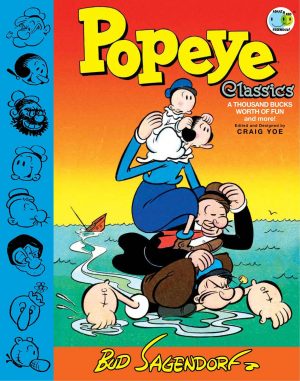