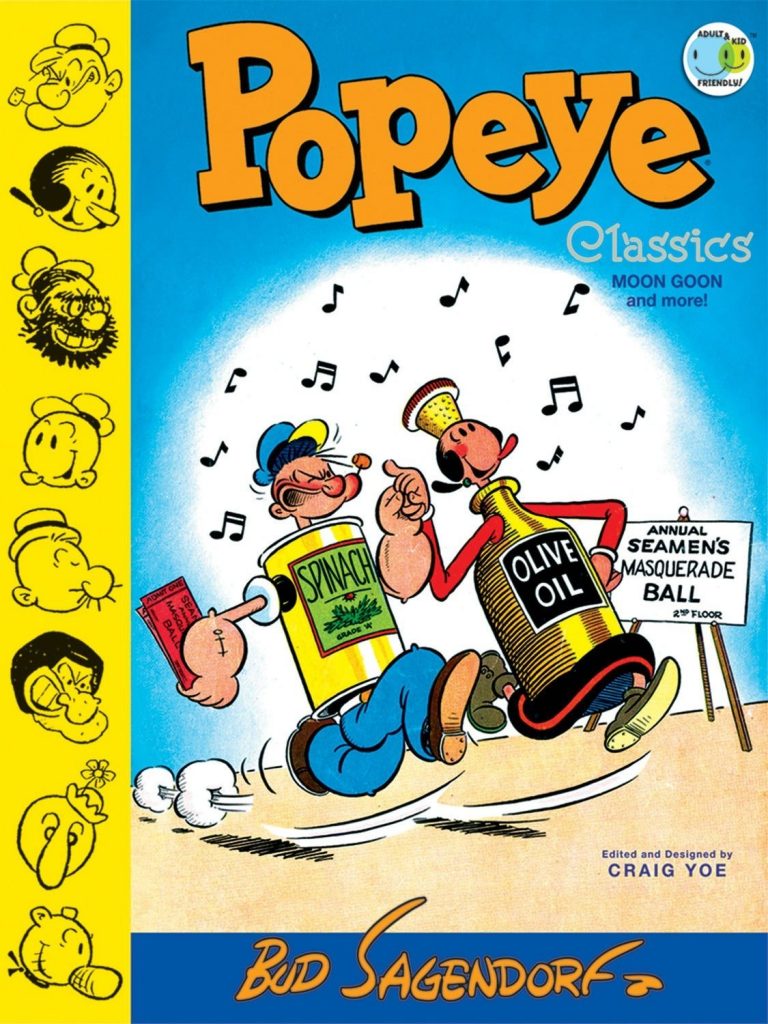 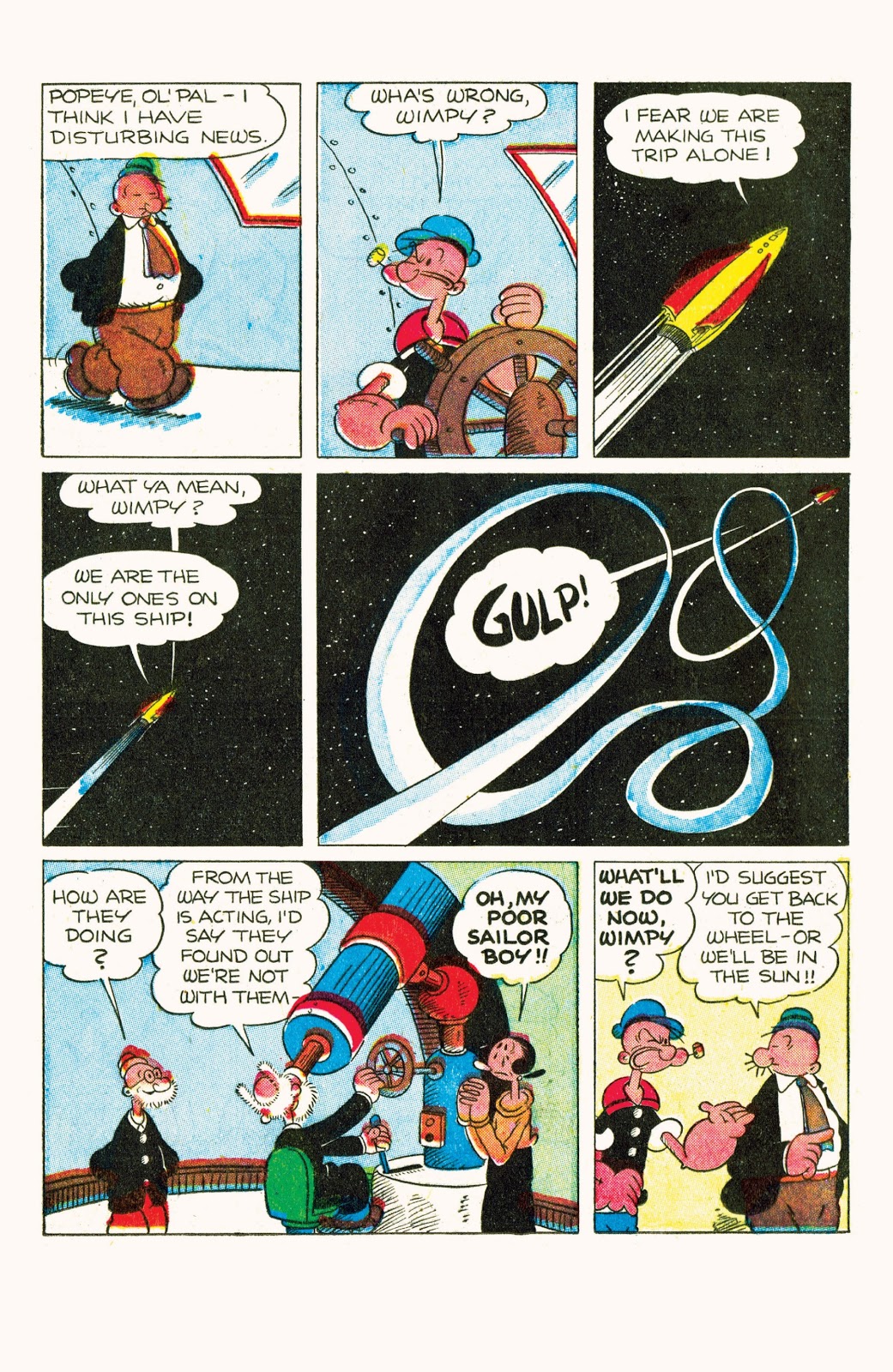 This second Popeye Classics collects another five issues of Bud Sagendorf’s Popeye comic series, this time all from 1949.

Perhaps under-appreciated is how good Sagendorf’s single page strips are. Used on the inside front and back covers, they’re always dynamic, surreal, silent sight gags of incredible whimsy and ingenuity. As in Volume One, Sagendorf follows the pattern of one longer story per issue followed by several shorter.

Alice the Goon proved a popular villain in the Popeye newspaper strip, and makes her first comic appearance in the opening ‘Moon Goon! or Goon on the Moon! or The Man in the Moon is a Goon!’ The title indicates the wordplay Sagedorf loved, and was so good at extrapolating. On the moon Popeye and Wimpy meet a number of incredible races, discover the origins of their unsightly associate Alice the Goon and enjoy an astounding and perilous new means of locomotion to get them back down to Earth.

The wonder of the strips begins with the clever titles, but continues with madcap plots that’s it’s difficult to imagine anyone other than Sagendorf coming up with. ‘Raft! or It’s a Long Drift Home! or Rafts are Boats, But Not So Comfortable!’ depicts Swee’ Pea and playmate Hink jerry-build a dubious wooden vessel and disappear down the river and out into the ocean. They’re hijacked by piratical rogue Captain Zato who thinks he has the secret of controlling Popeye and gaining vast wealth. Ravenous finagler J. Wellington Wimpy stars in ‘A Story of Hunger and Desert Madness entitled Food! Food! or May I Borrow Your Duck, Mister?’ He’s dumped in a desert for his usual parsimonious behaviour, in this case fare-dodging on a locomotive. As starvation looms, the chiseller encounters owlhoot bandit Terrific Tension and a grim battle begins for possession of the cowboy’s most treasured possession – a ham sandwich. The master moocher exhibits even greater guile in ‘A Tale of Brains vs. Work entitled Who Won? or The Fleeter of Foot Emerges Victorious!’, again fooling Rough House and his customers with the old raffle dodge.

Sagendorf takes his japery with alternate appellations to extreme limits with ‘I Am the Mayor!’, and then offering not one, not two, not even three, but four alternative titles. The comedy is even sharper than usual as Swee’ Pea races across America to substitute for Popeye and save the town of Boghill from bullying entrepreneur and arms dealer Bull Branco.

For this collection only, there’s the surprise resurfacing of Sagendorf’s old charges Sappo and Wotasnozzle, long since discarded from the newspaper strip continuity, but now restored to regular back-up strip status. Here henpecked oaf John Sappo once more allows his mad scientist lodger Professor Wotasnozzle to make him a pasty after sampling the bonkers boffin’s food stretching breakfast additive. A second story, ‘Presenting John Sappo and the Experiment of the Sound Pills!’, finds the goony-eye genius and his long-suffering stooge enduring the gibes of Sappo’s little nephew and respond in typical over-the-top fashion.

There is more than one Popeye. Most of them are pretty good, and some are truly excellent. This book is definitely top tier and if you love lunacy, laughter, frantic fantasy and rollicking adventure you should add this treasure trove of wonder to your collection. Witch Whistle and More follows.