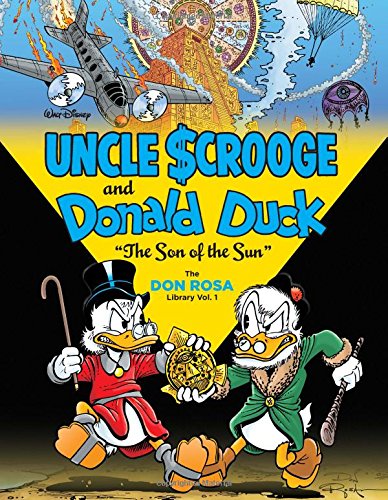 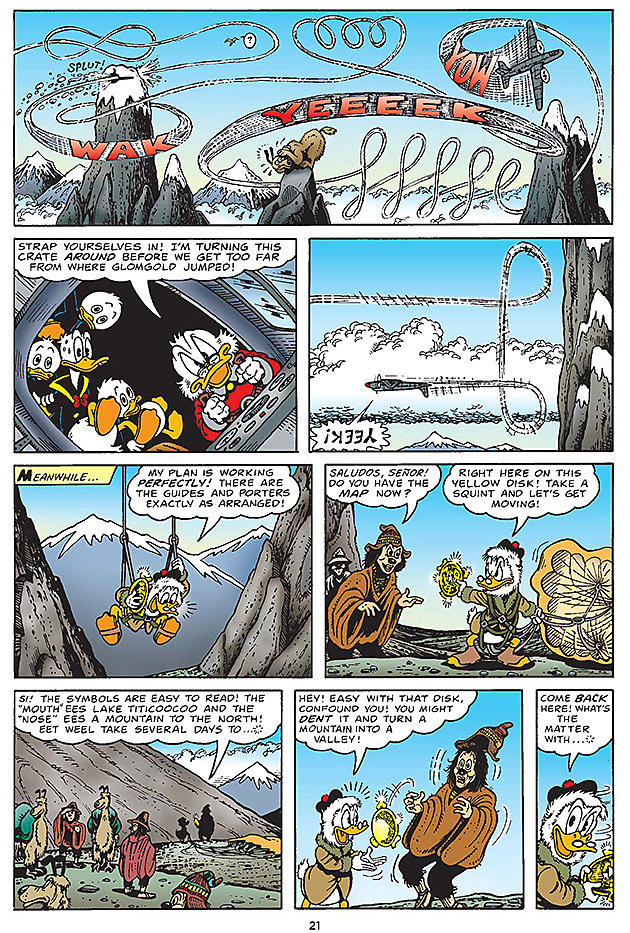 Fantagraphics gathering Don Rosa’s generally excellent Donald Duck and Uncle Scrooge stories in a similar hardcover archive format to their Carl Barks collections is extremely welcome. Many of the strips have never been collected in English language books, and most that have appear in books long out of print and often expensive.

Rosa was a lifelong fan of Barks’ work and had produced adventure strips for his local newspaper influenced by it. In a neat piece of restoration, for his first professional work he was able to re-format one of his serialised strips, replacing the cast with the ducks he’d rather have used in the first place. ‘Son of the Sun’ is one hell of a first professional statement for a new creator. It’s well crafted adventure as Scrooge, Donald, Huey, Dewey and Louie mount an expedition to search for lost Inca gold. Any minor shakiness about the art in places is outweighed by a funny and unpredictable story incorporating some great staged moments.

Two further long stories also feature, both also entertaining and impressive. ‘Cash Flow’ hinges on the Beagle Boys acquiring a gun that cancels inertia, and with it able to stage a successful raid on Scrooge’s money bin, and ‘Last Sled to Dawson’ returns Scrooge to Alaska, where he first made his fortune toiling for gold. He’s left something of value, and Rosa strings out the suspense as to what it is beautifully. It’s not entirely a sequel to Barks’ adventures, but when Rosa had no inkling he’d later be able to produce Scrooge’s extended biography it’s a loving exploration of themes Barks introduced then ignored as he moved to the next adventure in days before thoughts of continuity were applied to comics.

Six ten page stories and the other shorts have never previously been published in English language collections. As with his early longer stories, these utilise themes and scenarios employed by Barks, but Rosa brings his own ideas and well crafted gags to the table making them more than clever pastiches. Annoyed at their superior knowledge of wildlife, in ‘Mythological Menagerie’ Donald attempts to confuse his nephews by creating ridiculous creatures. ‘Metaphorically Spankin’ has Huey, Dewey and Louis attempting to avoid school, while ‘Oolated Luck’ sees Donald again trying to best the supernatural good fortune of Gladstone Gander. In ‘Nobody’s Business’ Scrooge despairs the workshy Gladstone and the incompetent Donald, so provides them money to invest in a business, while ‘Fit to be Pied’ is a feud with neighbour Jones at Halloween. ‘Fir Tree Fracas’ is sustained by the certainty of Donald always screwing up, and if the conclusion is contrived, Rosa’s confident Donald is wonderful. They’re all fun, and Rosa throws in small homages to Barks stories as easter eggs.

It’s only the two page gags that don’t raise the bar above average. Written by Gary Leach, they were created at short notice, but stretch jokes too thin, with Rosa attempting to disguise this by using far bigger panels than he usually would. Just six substandard pages from almost 150 is an excellent hit rate for anyone’s first fourteen months of professional work, and as entertaining as these strips are, they’re just a starting point, and Rosa really begins to hit his stride on the following Return to Plain Awful.

As with their Barks volumes, Fantagraphics have ensured this is a comprehensively attractive package by having Rosa supply comments and recollections about each story, and they include all cover artwork he produced for other Disney titles of the period.