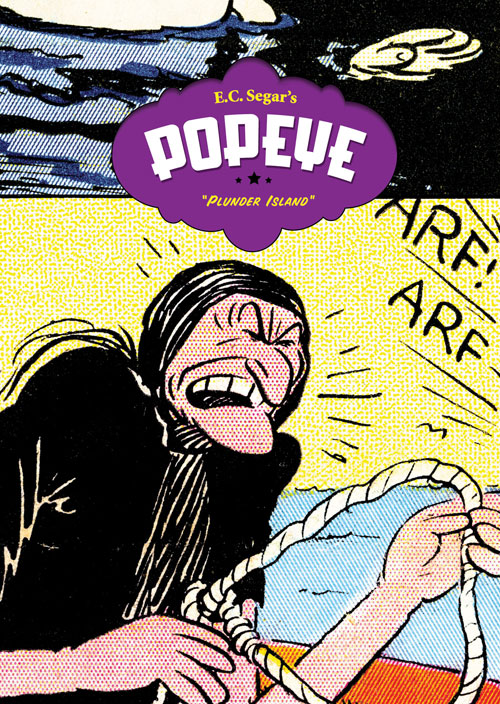 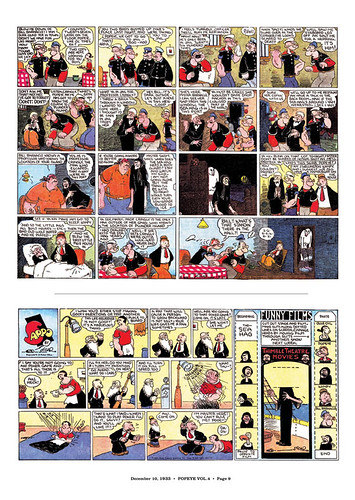 Popeye is the first Superman, but he’s not a comfortable hero. He’s a brute thinking with his fists without respecting authority; uneducated, short-tempered, fickle, a worrisome troublemaker and gambler who wasn’t welcome in polite society, and he wouldn’t want to be. The ultimate working-class hero is raw and rough-hewn, practical, with an innate and unshakable sense of what’s fair and what’s not, a joker who wants kids to be themselves – but not necessarily “good” – and a man who takes no guff from anyone.

This fourth hardcover collection of Segar’s comic masterpiece gives the Sunday colour pages precedence as magnum opus ‘Plunder Island’ is reprinted in its full, unexpurgated totality. The selection continues from “Let’s You and Him Fight”, covering December 3rd 1933 to April 7th 1935, with the epitome of stirring sea-sagas occupying the first six months. Rollercoaster adventure, thrills, chills and riotous comedy have never been better blended, but fun doesn’t stop when the victorious crew return home. Next, we examine the bitter aftermath, and how the wealth won is disposed of or lost again. Wimpy simply and rapidly eats his way through most of his, whilst Popeye gives his away, prompting his return to the world of extreme prize-fighting.

The dailies section covers 11th December 1933 to 24th July 1934, beginning with the cast moving to ‘The Laziest Town on Earth’, granting the self-deprecatingly trenchant Segar an opportunity to lampoon himself and his profession with the creation of B. Loony Bullony: World Famous Cartoonist. Olive inheriting 20 million dollars increases her marital prospects, but since the most ardent convert to her previously well-hidden charms is J. Wellington Wimpy, she soon realises that money isn’t everything in ‘Romances and Riches’. This extended morality play on the evils and travails of wealth contains some of the funniest screwball comedy set-pieces of the entire 1930s (books, movies, strips, everything!). Memorable moments include Popeye in drag (particularly a fetching ladies’ swimsuit), the elder Vanripple and the sailor in a wild-oat sowing contest and Olive as a movie star – complete with fake “million-dollar-legs”.

In this era casual racial stereotyping was considered acceptable. Segar sinned less than most: his style was more character-specific, and his personal delight was playing with how folk spoke. George W. Geezil wasn’t merely a cheap Jewish stock figure of fun, but as fully rounded as any one of nearly fifty supporting cast members could be within the constrictions of page and panel count. In ‘Black Valley’, Castor Oyl has a manservant called Eclipse, who, although superficially little different in speech pattern and appearance from less-enlightened cartoonists’ portrayal of African Americans, plays an active role. He wasn’t there for cheap easy laughs, but it’s clear Segar wasn’t comfortable with him and he wasn’t a permanent addition.

A less than wonderful “treat” can be shared with Popeye addicts from the 1930s. ‘Popeye’s Ark’ was another spectacular six month long lark, wherein the sailor-man attempts to emulate the Biblical mariner who built “Nora’s Ark” to sail the seas in a giant vessel filled with beasts until he found the promised land of “Spinachova”. Sadly, we all get to “enjoy” cliffhanging tension as this sequence ends twelve weeks in, to be continued in “Wha’s a Jeep?”. Oh, the unrelenting tension.