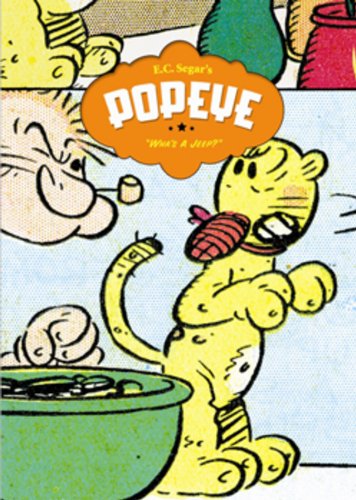 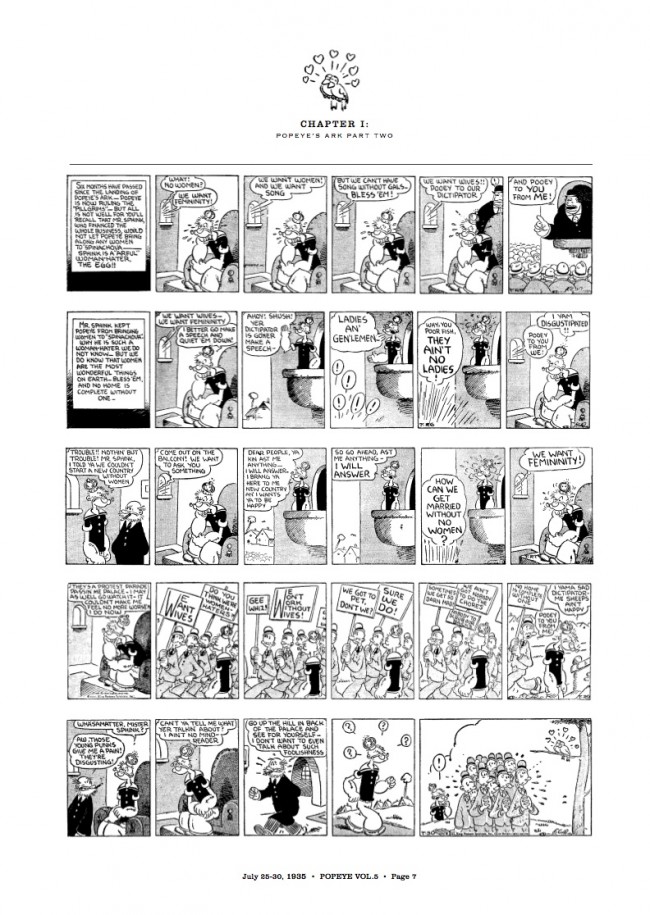 This fifth superb oversized hardback collection continues from “Plunder Island” and opens with the monochrome Monday to Saturday Popeye strips covering July 25th 1935 to December 12th 1936, encompassing one-and-a-half major storylines. It starts with the eagerly-anticipated conclusion of ‘Popeye’s Ark’, wherein our bold sailor-man carries out an ambitious plan to set up his own country of Spinichovia. The funding is by misogynist millionaire Mr. Sphink who insists that the new country be absolutely without women, and Popeye recruits a host of disaffected guys looking for a fresh start. The problems are obvious, but Segar mines them beautifully over several connected stories, funny and adventurous.

By the conclusion all the players have returned to America, just in time for the introduction of the star of this tome. Eugene the Jeep debuted on March 20th 1936: a fantastic beast with incredible powers that Olive and Wimpy use to get very rich, very quickly, only to lose it all betting on the wrong guy in another of Segar’s classic and hilarious set-piece boxing matches between Popeye and yet another barely-human pugilist. These tales come from an astonishingly fertile period for the strip’s long history. Eugene was instrumental in kicking off another groundbreaking and memorable sequence as the entire ensemble cast undertake ‘The Search for Popeye’s Papa’.

As Popeye’s popularity grew, he mellowed. He was always ready to defend the weak and had no pretensions or aspirations to rise above his fellows, but the shocking sense of unpredictability, danger and anarchy he initially provided was sorely missed by 1936. So Segar brought it back in a memorably riotous tale. He introduces ancient, antisocial crusty reprobate Poopdeck Pappy and his diminutive hairy sidekick Pooky Jones during another fabulous voyage of discovery. The elder mariner is a rough, hard-bitten, grumpy brute quite prepared and even happy to cheat, steal or smack a woman around if she steps out of line. Once that old goat is firmly established, Segar set Popeye and Olive the Herculean task of ‘Civilizing Poppa’ which is where the monochrome adventures conclude.

The full-colour Sunday pages span April 4th 1935 to September 13th 1936, and see the second features gradually diminish to allow the Popeye and Co. even more room to excel and amaze in alternating one-off gag strips and extended sagas.

When not beating the stuffing out of his opponents or kissing pretty girls, Popeye pursued flighty, vacillating and irresolute Olive Oyl with exceptional verve, if little success. However, his life is always more complicated whenever the unflappable, so-corruptible and adorably contemptible Wimpy appears. Wimpy was the perfect foil for a simple action hero and often steals the entire show.

Infinitely varying riffs on Olive’s peculiar romantic notions or Wimpy’s attempts to cadge food or money for food are irresistible, but Segar wisely peppers the Sundays with longer episodic tales, such as the cast’s gold-prospecting venture to the inhospitable western desert of ‘Slither Creek’ and a sequel sequence wherein the temporarily wealthy but eternally starving Wimpy buys his own diner – the ultimate expression of blind optimism and sheer folly.

The uniquely sentimental monster Alice the Goon returned to the strip on February 23rd 1936, permanently switching allegiance and becoming nanny to rambunctious tyke Swee’ Pea. She was a cast regular by the end of April.

August 9th saw Eugene the Jeep make his Sunday debut, and a few demonstrations of the fanciful beast’s incredible powers to make money and cause chaos fill out this fifth fantastic tome. “Me L’il Swee’Pea” is next.