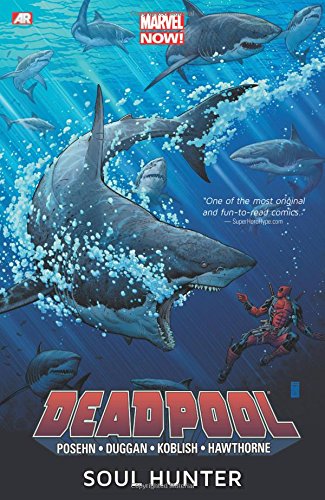 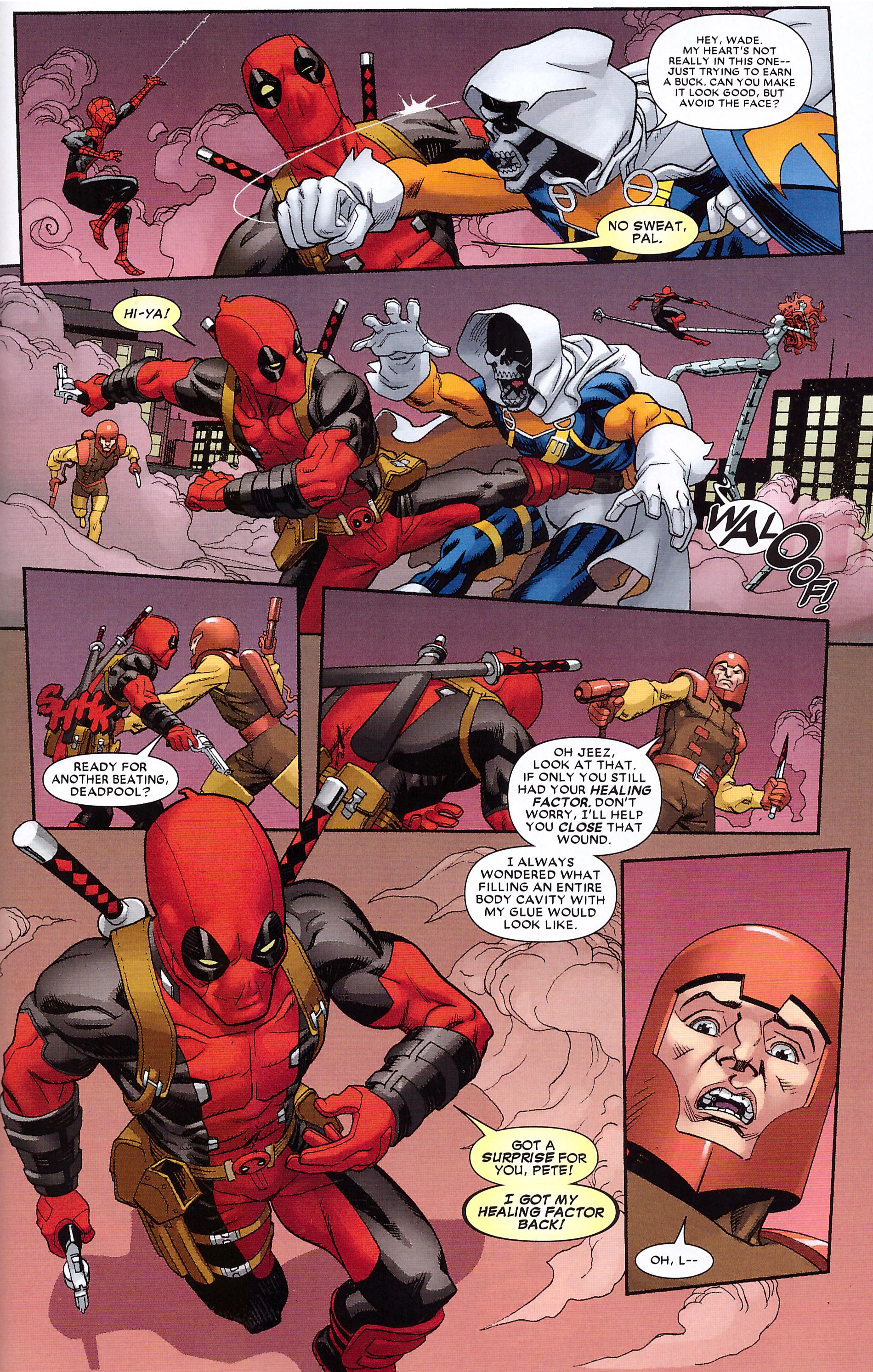 Wolverine versus a shark was certainly a treat back in the day, so a cover of Deadpool facing the same threat certainly works as an appetiser. Unfortunately, however, it’s a case of deception, as the sequence inside is brief and anti-climactic. But never mind, as there’s plenty of good stuff, beginning with a faked never before printed 1980s issue of Deadpool.

It’s surely parody from their father’s era for the average Deadpool fan, and writers Gerry Duggan and Brian Posehn pepper it with period references (Flash Thomson buying a Huey Lewis album), but Deadpool’s correct and on form, and in the end isn’t that what matters? Scott Koblish rounds things off nicely imitating the 1980s layouts and turning in art covered in the dots the old four colour printing left if you stared at a comic for long enough. This form of parody is a series staple.

After that we begin to deal with the problem Deadpool was left with at the end of Dead Presidents. He’s always had an inner monologue, and now there’s someone inside his head he can have it with. The essence of dying S.H.I.E.L.D. agent Preston has been stored there, and to complicate matters further, the ghost of Benjamin Franklin is still hanging around and Michael, the necromancer Deadpool’s depending on to excise Preston from his head, has placed himself at a considerable disadvantage.

Other distractions include encounters with Iron Man, Daredevil and Spider-Man (Superior version), several not quite guest appearances, and we take a tour through Deadpool’s brain. Yeah, that’s been done before, but not quite like this. When the opening dust settles, Deadpool has the task of settling accounts with four people who’ve made a deal with the devil.

Mike Hawthorne draws the bulk of Soul Hunter in an economical manner. There are some oddly stumpy figures in places, but not enough to worry about. More problematical is that he’s not keen on drawing more than necessary, which makes New York appear considerably under-populated. That has a greater nagging quality, but for the most part Hawthorne’s fine.

As is the case in Deadpool’s world, what begins as simple rapidly complicates, and what starts off as a tricky proposition escalates to unmanageable proportions. The writers throw in jokes aplenty, and the randomness of Deadpool’s life ensures no-one will predict where the plot goes. Fun from cover to cover. It continues in The Good, the Bad and the Ugly.