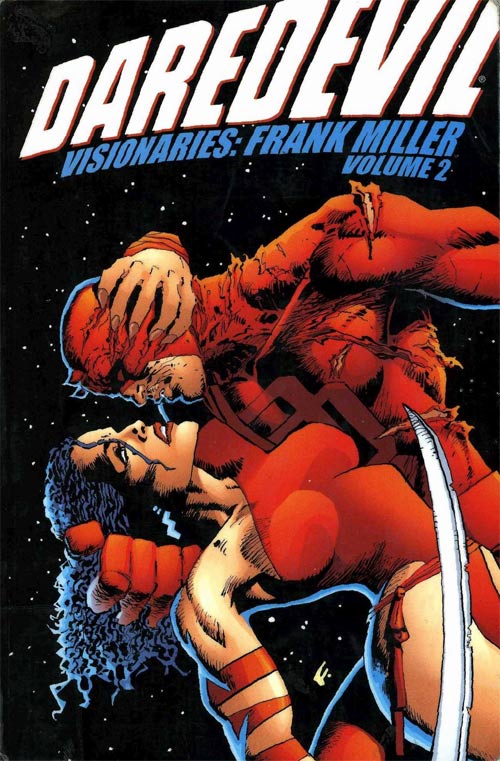 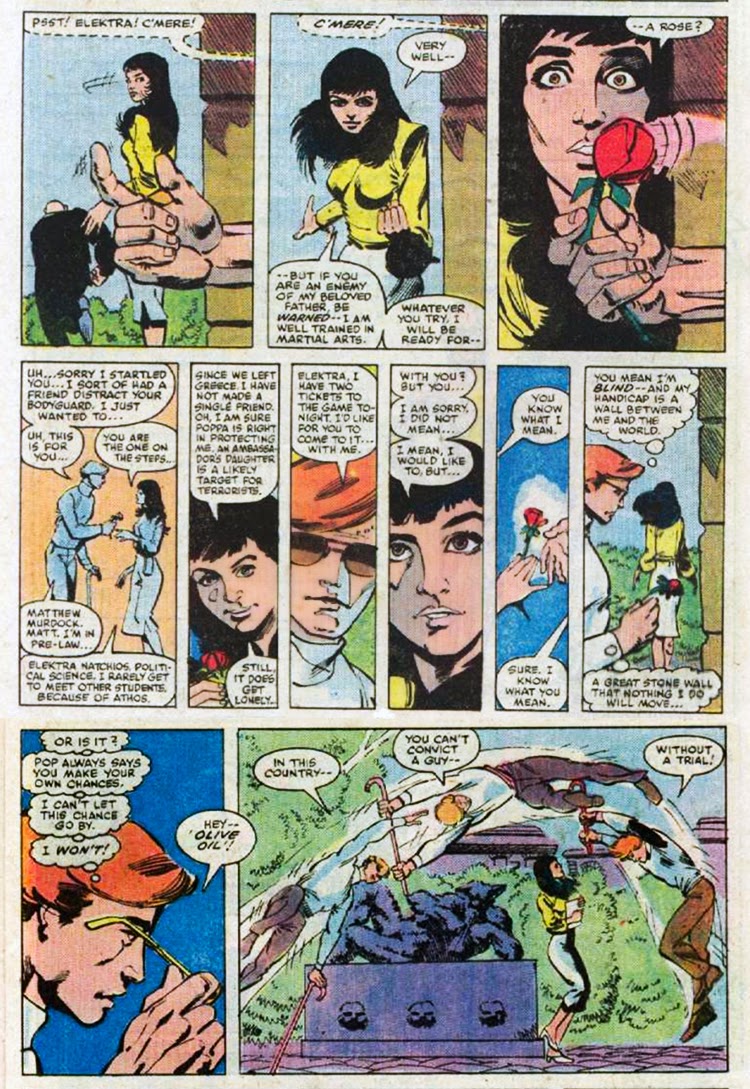 When Frank Miller took over the writing from Roger McKenzie, Daredevil was in danger of cancellation, struggling along published bi-monthly, but just three issues later in June 1981, the title was re-instated to monthly publication and selling really well. According to Deborah Schutz’s introduction in this collection, the testament to Frank Miller’s writing skills was that the number of female readers increased exponentially too.

While Miller was primarily the artist in Volume 1, taking over the writing, now on a monthly basis, meant he relied a great deal on inking partner Klaus Janson to add finishing detail. Miller wastes no time in further stamping his identity on Daredevil by re-imagining Matt Murdock’s origins little by little, establishing the Kingpin, Wilson Fisk, as a truly menacing criminal mastermind, Bullseye as a genuine psychopath, and introducing new characters Elektra and Stick.

While Miller’s art was the focus of the previous volume, his story telling is the focus here, a definite metamorphosis taking place. He introduced gritty plots that looked at the darkness inside the human soul, what made a hero a hero, and increasingly commented on social justice issues of the time. 1981 was one of New York’s most violent years on record. Crime was on the rise, mob influence and gang war at its peak and citizens of New York were staying off streets that were increasingly dirty thanks to strikes. Miller mirrored these events in the rise of the Kingpin and the brutal violence surrounding it. To keep the focus on characters and relieve the increasing pressure of both writing and pencilling, Miller simplified his art while increasing the atmosphere with simple but startling backgrounds. With Janson’s input this became more and more effective, more detail and emotion gradually being added as the series continued, without compromising the elegant simplicity of it all. As much as it is a social commentary on New York’s flaws, it is a love letter to that same city with wonderfully depicted skylines and aerial views.

So many aspects of Miller’s work here added to the Daredevil mythos, from its gritty artwork to the innovative and bold storytelling, and the characters he introduced (Elektra, Ben Urich, Stick and, to a lesser extent, Turk) became entrenched at Marvel. Those he co-opted such as Foggy Nelson and Wilson Fisk were developed, and eventually become the characters we know now. Miller’s influence clearly fed into Daredevil adaptations for film and television, and the most acclaimed Daredevil run of recent years by Brian Michael Bendis draws heavily on the atmosphere. This is also the blueprint for Miller’s later re-working of Daredevil’s origins in The Man Without Fear.

After such detailed pencil work in Volume 1, you might be forgiven for thinking his standards were slipping but it constantly improves. Over thirty years on these stories still buzz with energy and feel fresher than the previous volume, Frank Miller clearly deserving to be called a Daredevil Visionary. Yes, better stories would come along and by other creators, yet Miller’s work will always be a benchmark for visionary storytelling.