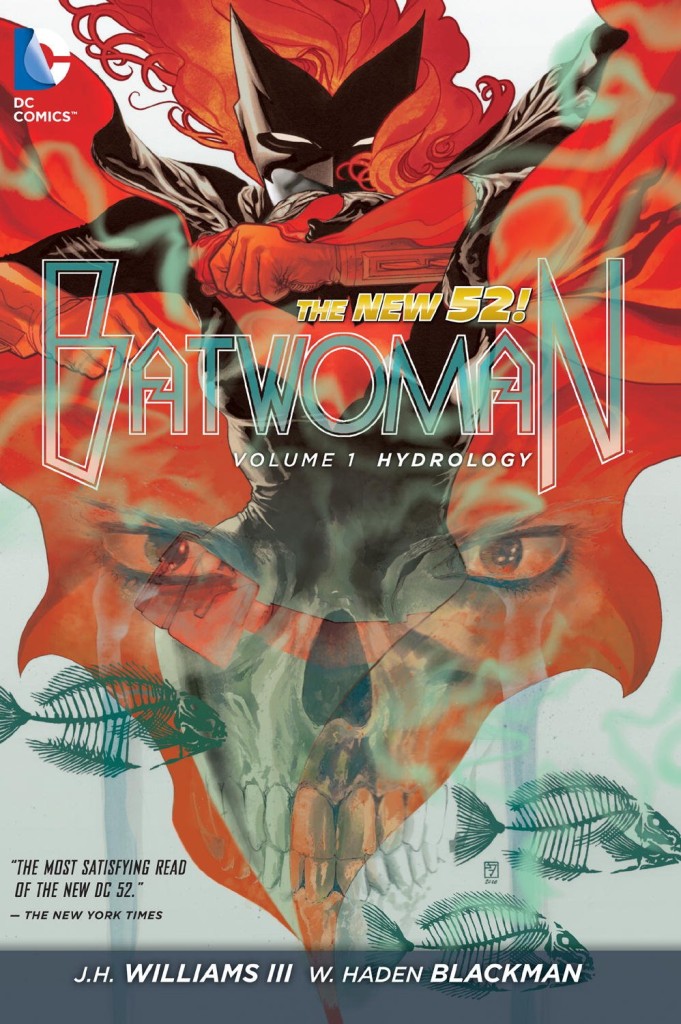 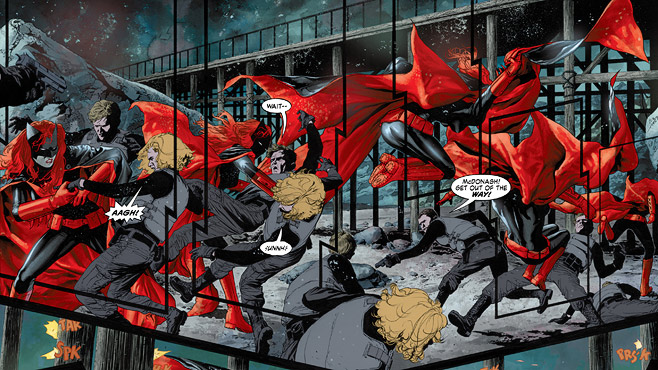 Batwoman’s first outing in the modern era, Elegy, was graced by the stunningly decorative art of J. H. Williams III, as is this opening volume of a new series. What’s surprising is that he also contributes to the writing, which is shared with W. Haden Blackman, previously known for his work on Star Wars comics and video games.

The artwork matches the stunning standard set by Elegy, and earned Williams III a Harvey Award as he once again mixes his styles and techniques to extremely satisfying effect. Dependent on the scene portrayed he might supply straightforward pencils and inks, or a painterly collage, either bright or gloomy, or a more esoteric decorative effect. The story is told via jagged panel outlines, or two parallel narratives extending across a horizontal spread, or by mirror images overlaid with a bat motif (all in the opening chapter), yet never do the design experiments obstruct understanding. Colourist Dave Stewart is entirely attuned, matching the mood, be it Mondrian primary colour vibrancy or wispy near monochrome.

As Hydrology opens Batman and the Department of Extranormal Operations are attempting to verify that Kate Kane is Batwoman, she’s blanking her father after the events of Elegy, and she’s relentless in pursuing those associated with the Religion of Crime.

The DEO is represented by Agent Chase, on whose title Williams III cut his artistic teeth is 1997, here given an unsympathetic upgrade to power-dressed manipulative bitch. She’s the least sympathetic of a cast whose prominent members are all female, as Detective Maggie Sawyer and Bette Kane, superhero wannabe round out the side of the angels. To greater or lesser extents they’re all interested in a ghostly weeping angel who’s abducting children and appears to be associated with a Latin American myth.

If you’re not soaking in the art, this is a fast-paced read, and much changes over the course of six chapters. It leaves Batwoman with a decision to make and while it may seem otherwise, this essentially forms one long continued story with the following volume To Drown the World.

So, endlessly rich and fascinating art, a compulsive character driven lead, a strong supporting cast and intriguing plots. What’s not to like? Oh, if you’re picking up the hardcover edition beware a slight loss of detail as some pages sink into the central binding.