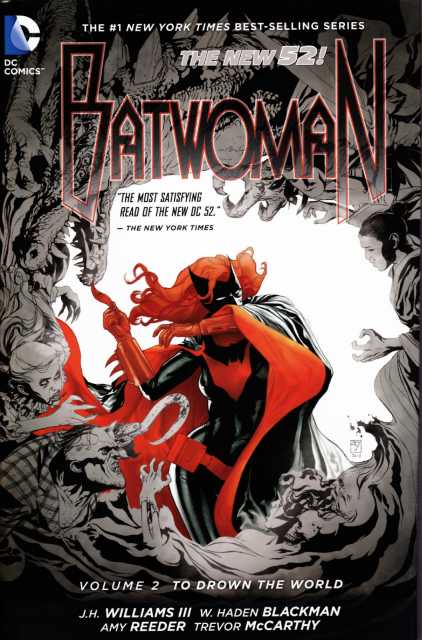 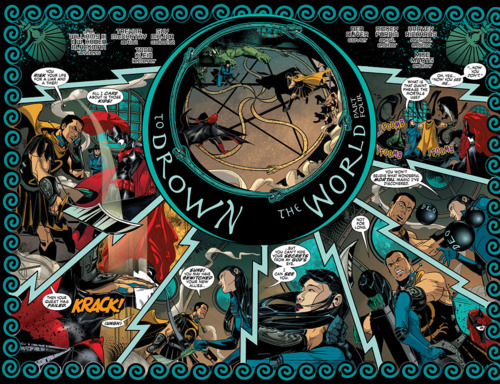 There’s an immediate disappointment in cracking open this volume. It’s that J.H. Williams III isn’t responsible for the art.

Following him is an invidious task for the team of Amy Reeder and Rob Hunter, then Trevor McCarthy as Williams III didn’t just have a single distinctive style, he was accomplished at producing several looks that he combined to give Batwoman an utterly unique visual stamp. The replacements are really caught between a rock and a hard place in terms of critical appreciation. Were they to use their own styles there’d be complaints about the change, and not being able to match the versatility of Williams III would also prompt complaints. Bearing that in mind, let it be said both are good. Reeder seemingly lacks the versatility for the painterly approach. Her pencils are evocative for character moments and action-oriented when required, but this reduces Batwoman to a far more traditional looking publication. McCarthy is quite the revelation for those who might remember his millennium period cartoon distortion on Batman titles. He’s not Williams III, but gives him a run for his money in techniques and decorative layouts.

Early in this book there’s a belated explanation for La Llorona, the water spirit from Hydrology, and she’s connected to Medusa, the crime organisation that becomes the focus of this volume. Batwoman has been coerced into working for the Department of Extranormal Operations, although that comes with benefits such as additional technology. The downside of this, in story terms, is that some are worked in as cheap gimmicks that explain a shock when the page is turned.

Working for the DEO comes at a cost, though, and Kate Kane spends much of the book considering how far she’s compromising her principles. The writing team of Williams III and W. Haden Blackman deliver a choppy narrative, deliberately switching between past and present, between one character and another. It must have been extremely difficult to follow in the original monthly comics, and it’s not the only problem here.

Medusa and those allied with them are quite the gruesome bunch with very unsavoury habits. They represent the darker side of Gotham and would be quite at home in a horror comic, although possess an interesting connecting feature. While most of the villains to date have been created for Batwoman, old Batman foe Killer Croc is among them, although to no great purpose here. However, they’re otherwise all smoke and mirrors and their purpose remains uncertain. Both of these comments are addressed in the following World’s Finest, and well, but within this book the absence of purpose is a flaw.

When Williams III and Blackman do shift up a gear, though, it provides some heartbreaking moments. It’s an interesting technique to deliver much of Kate’s character and background via her father, now isolated from her, and spending a lot of time in hospital visiting someone there from the previous volume.

Threats remain at the end of the book, and they’re picked up in World’s Finest, with Williams III back on art.