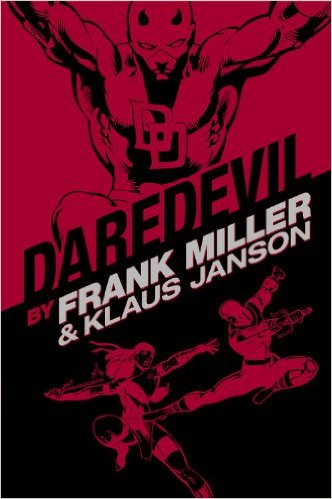 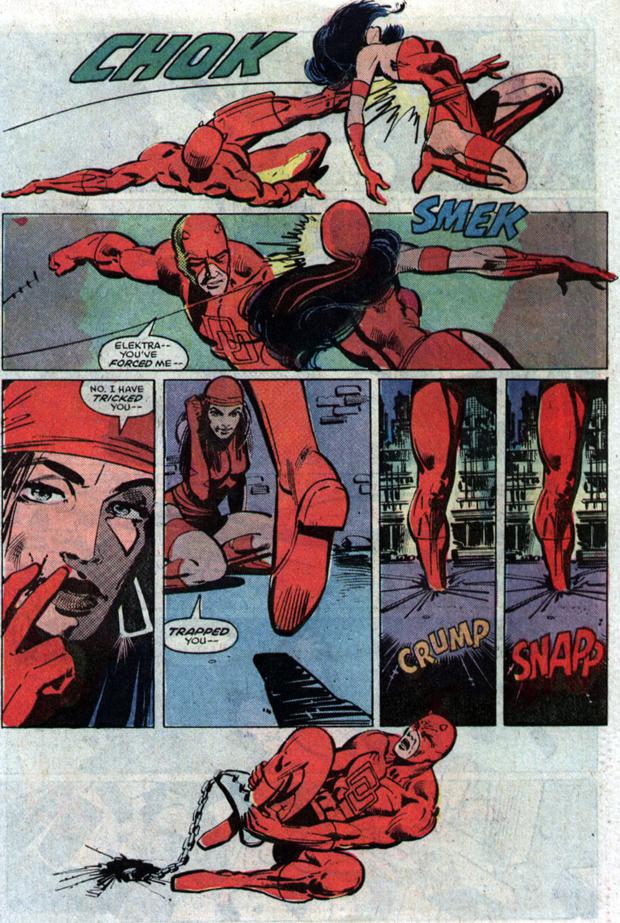 There are graphic novels and then there is the Daredevil by Frank Miller and Klaus Janson Omnibus. Collecting a run that spanned four years, this is a behemoth of over 800 pages. Frankly, you could read it and bench-press at the same time. Unfortunately, it won’t come cheap as second-hand editions start at £85, newer ones at £95. It is possible to purchase all three Miller & Janson volumes for much less with the benefit of extra stories.

This anthology can be separated into roughly three parts. The first collects the stories Miller and Janson illustrated for Roger McKenzie. This was Miller’s first continued series, while Janson was already in place as inker. Part two covers work with Miller both the writer and primary artist, while part three sees Janson either finishing Miller’s art or pencilling, leaving Miller to write. Both the Daredevil Visionaries: Frank Miller and Daredevil by Frank Miller & Klaus Janson anthologies have followed this pattern to a greater or lesser degree.

This is the best presentation of Miller’s and Janson’s creative output on Daredevil. It leaves out the extras provided in the earlier collections, so the transitions from story to story are smooth to start with and improve. It’s a concise(if large) exhibition of their work that shows both the gradual development of  genre defining Miller and Janson partnership, and the evolution of Daredevil from second string hero to pop culture icon.

Some defining moments in Daredevil history are contained here, from the first appearance of Elektra to her infamous and tragic showdown with Bullseye. Miller created Elektra and Daredevil’s blind mentor Stick, along with their ninja assassin adversaries The Hand, all becoming integral parts of the series and Marvel lore. The way Kingpin Wilson Fisk and Bullseye are portrayed elevated them in the rankings of Marvel villains, and in many ways they’re more threatening than some of their super-powered counterparts. There are also guest appearances from Black Widow, Fantastic Four, Hulk, Power Man, Iron Fist, the Avengers, Doctor Octopus and the Punisher.

What is exceptional about Miller’s writing, is how well his stories slot together. There is no over-arching storyline to the earlier issues written by McKenzie, and Daredevil was in danger of cancellation. Miller changed that. Everything that made Daredevil or influenced later stories (particularly The Man Without Fear) is also here.

Miller and Janson’s work isn’t perfect, but it showed that it was possible to innovate, rather than stick to the stale format comics had at the time. They both redefined a character who’d struggled for years, imprinting a mileu, and the storytelling influence is a legacy still rippling through Daredevil and the Marvel Universe. Superhero comics became grittier, the art allowed to simply tell the story, and the cluttered speech bubbles so common at the time were shed. Female readership of comics in general also increased, Miller and Janson  credited as a major influence to that shift, along with Chris Claremont and John Byrne’s work on X-Men in the same period.

A new age was dawning in the comics industry. Frank Miller and Klaus Janson, with their work on Daredevil, were just the first glimmers of light dancing on the hills.