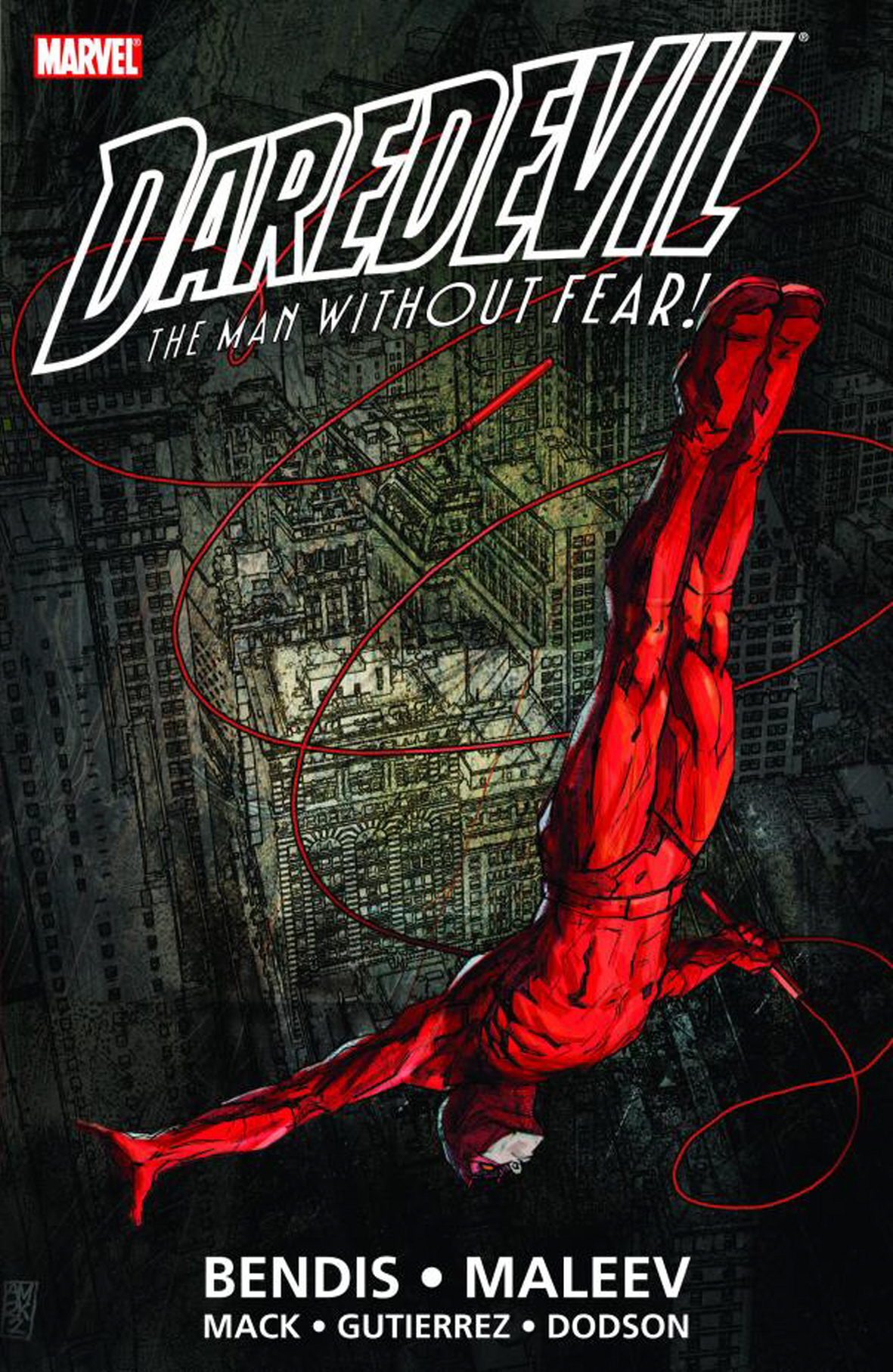 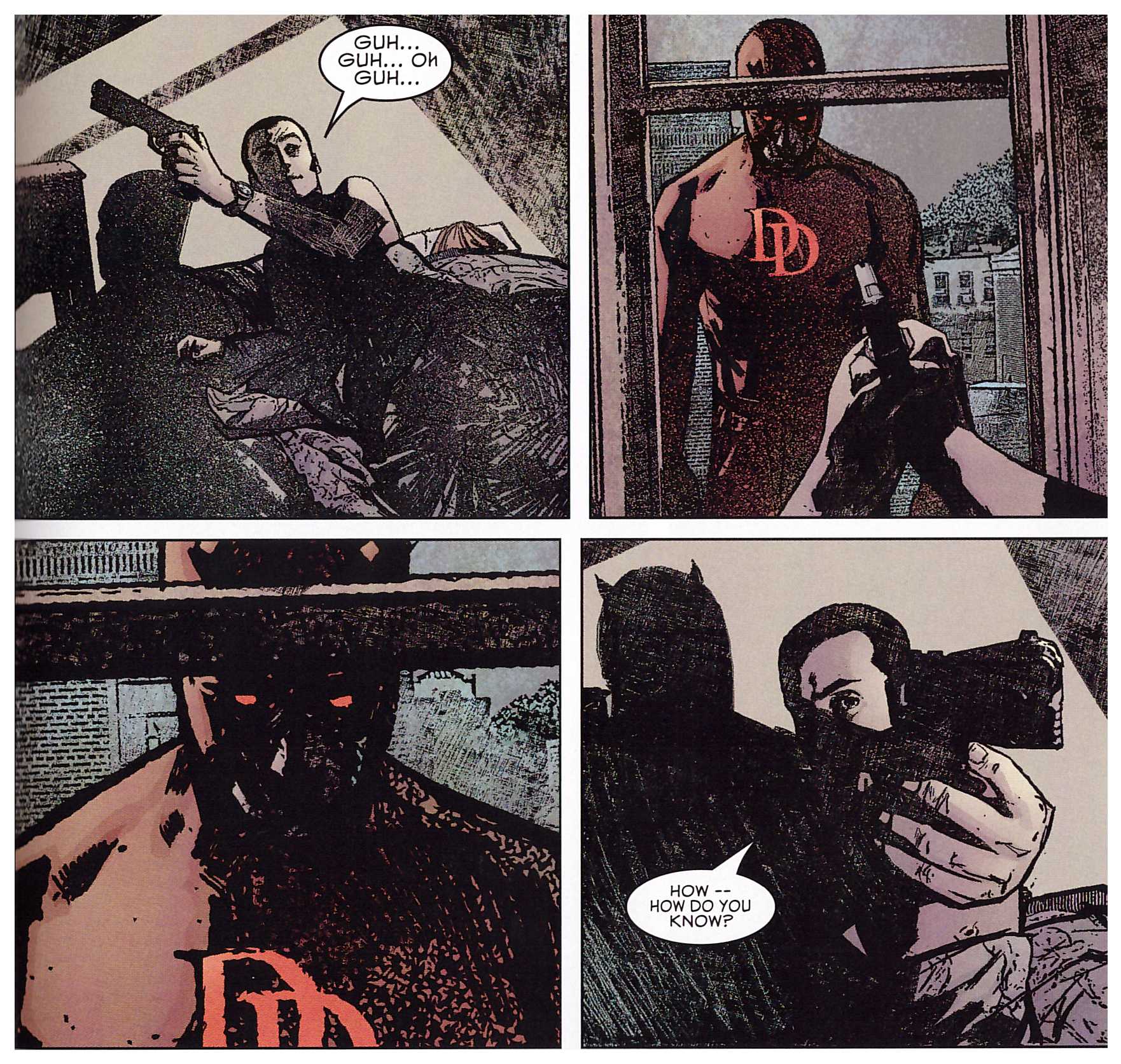 When Brian Michael Bendis began writing Daredevil his previous comics CV was relatively limited, and exclusively concerned with crime material. He’d mastered the quirky anecdotal dialogue patterns that so enlivened the films of Quentin Tarantino, and these two strengths filtered into Daredevil from the start.

Where he was less at home was getting his head round the idea that while Daredevil dealt with crime, he was also a superhero, and he’s entirely absent from three-quarters of Bendis’ first story. That’s an investigation by journalist Ben Urich into why villain Leap-Frog has disappeared. It’s drawn by David Mack, and although very different, both he and the other primary artist Alex Maleev could be described as acquired tastes.

Mack takes a fine art approach. His pages are mixed media, splattered with splodges of background colour, while smaller head shots are randomly pasted around to supply the dialogue. These are often surrounded by ornate frames rather than the traditional ruled panel border. Maleev is the opposite end of the scale in terms of method, skilfully manipulating images for mood and effect, and well served by the sympathetic colouring of Matt Hollingsworth. Maleev’s pages are layered in grainy effect, and while there’s sometimes a static quality to his work, it creates the appropriate mood.

The Urich story appears to have been a tryout for Bendis, and it’s accompanied by Maleev that the character defining run begins. The excitement is apparent from the opening pages as Daredevil’s civilian identity is first whispered to a few behind closed doors, then broadcast to the world from the front of a newspaper. It’s a very comforting old school form of visual shorthand for a society already entrenched in an era of 24 hour rolling TV news. This revelation is the issue that defines Bendis’ run on Daredevil, with pretty well all other stories if not spinning from it, then certainly advised by it. “Well, I’m guessing this is the end of the road. The barbarians are literally at the gate”, comments Foggy Nelson with New York’s press entrenched outside the offices of Nelson and Murdock.

Maleev arrives pretty much the finished article, but Bendis’ growth and confidence as a writer can be charted as this volume progresses. He starts well, but learns how to pace his stories better, how to ensure a minimum level of costumed action in each chapter, and how to insert his entertaining dialogue more sympathetically into the material. This material won an Eisner Award for Best Continuing Story.

After Urich’s investigation there are three primary story arcs, all good. The first concerns glib gangster Sammy Silke’s plans to usurp the Kingpin, the second details how Daredevil’s civilian identity is leaked and the consequences, and the third has Daredevil’s civilian shield Murdock defending fellow costumed hero the White Tiger. In a story pencilled by Manuel Gutierrez, then Terry Dodson, the White Tiger is accused of robbery and the death of a police officer. Bendis’ years of studying police procedural and courtroom dramas feed into a compelling script where the White Tiger’s minor and disposable status provides tension all the way to an unpredictable conclusion.

It’s with this story that Marvel policy changes for a period, and after decades of all lettering being upper case, technology permits clearly reproduced lower case type. The change wouldn’t be permanent, but it’s engaging.

The material was previously collected in paperback collections titled Wake Up, Underboss and Out, although, confusingly, while these titles are present and correct on title page and indicia, they’re nowhere to be seen on the cover. On the shelves their spines indicate volumes 3-5. 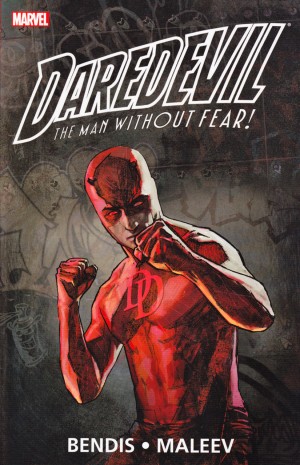 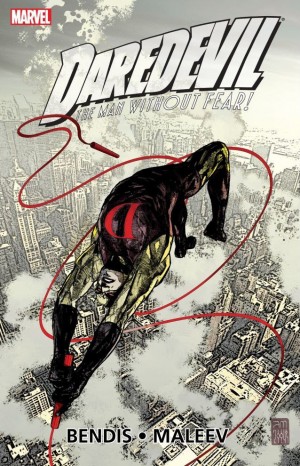 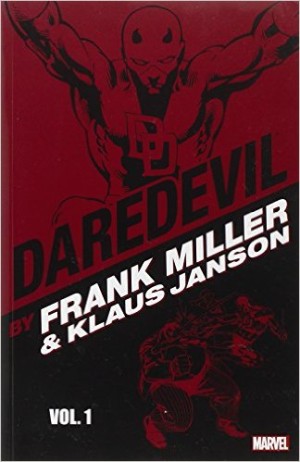