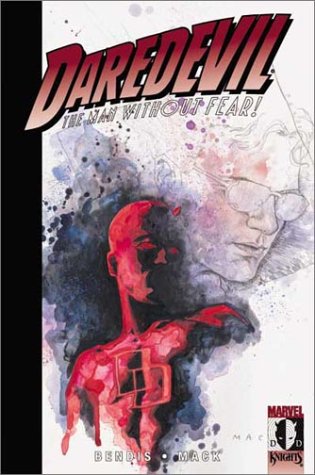 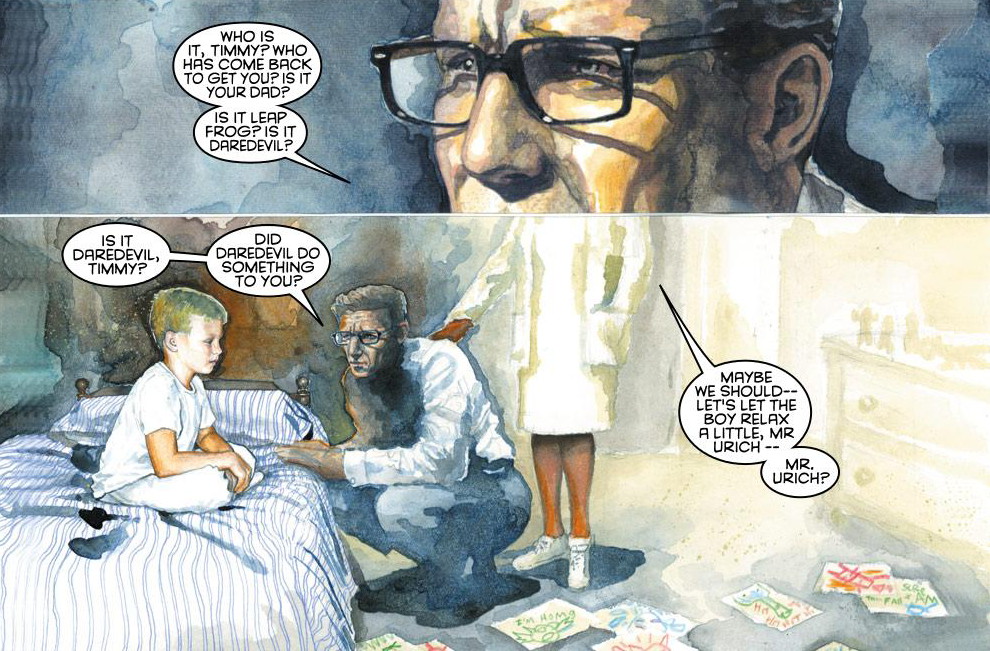 This volume began Brian Michael Bendis’ long and auspicious career as a writer of Marvel superheroes, yet at the time Daredevil was possibly the only regular title he was qualified to write.

He’d established himself as the creator of clever crime comics with Goldfish, Jinx and Sam & Twitch all worth investigating, and that was certainly a skill that crossed over to Daredevil’s sphere of operations. That work was also dialogue heavy, but as Kevin Smith had established the tone for the new Daredevil series, this wasn’t much of a problem. It was also greatly to Bendis’ benefit that he was able to collaborate with artist David Mack for this story. The pair had both worked independently for Caliber comics, although never together, and Bendis is on record of being a big fan of Mack’s artwork.

Mack’s painterly style is experimental for comics, involving collage, pencilled sections blended into painted art, randomly decorated surroundings to highlight smaller panels on the bigger picture, and distracting clouds of colour as background. He’s spent a lot of time studying Robert Rauschenberg, and there’s no doubting the quality of individual images, but these are Mack’s  priority, and he can fail to impose a compositional structure to tell a story. Either Mack’s inner discipline or tight editing prevents too many lapses here, as there’s greater coherency than some of his work on Kabuki, but they are present and awkward.

The gist of the plot is newspaper reporter Ben Urich attempting to locate a missing villain named Leap Frog. He’s hampered by the only clues being within comics drawn by Leap Frog’s son, little Timmy, catatonic until he starts drawing comics before lapsing back to his previous condition, giving the story it’s title. Urich pads the neighbourhood for three chapters constructing clues until Daredevil pops up to chip in.

Wake Up is unsatisfying with too many slips. Bendis occasionally uses Urich as his own voice, as in a heavy-handed discussion of how commercial concerns of newspapers range against writing the truth. This, Urich believes is the only method of ensuring newspapers survive, by supplying what can’t be purchased elsewhere. It appears to be Bendis’ metaphor for comics. There’s also surely an expectation that with Daredevil’s name and picture on the cover, that he feature as more than a vehicle for exposition and a moan about the quality of criminal he encounters.

This may seem harsh when Bendis has supplied a serviceable story. Given his relative lack of experience it is impressive, but he’d progress to far better.

This collection is now out of print, but the content is gathered along with succeeding volumes Underboss and Out in volume one of Daredevil by Brian Michael Bendis and Alex Maleev Ultimate Collection.