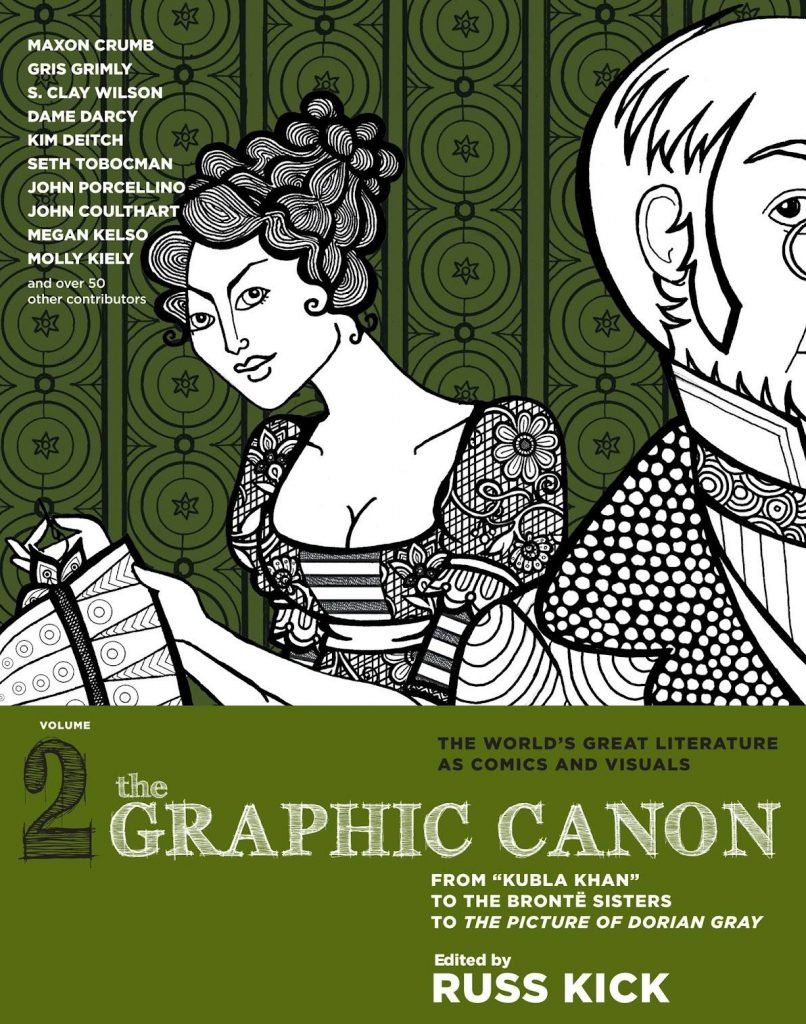 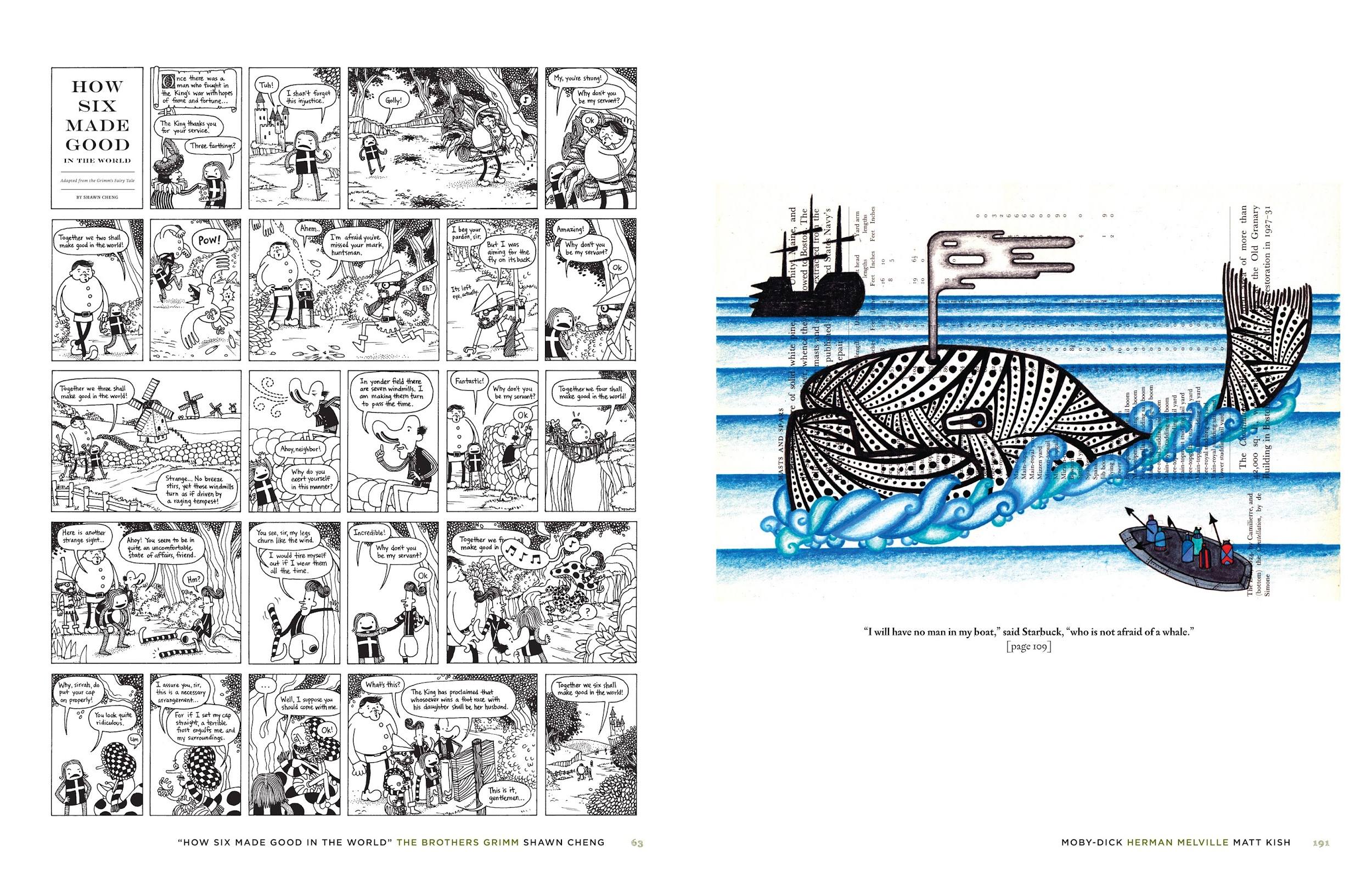 The Graphic Canon’s second volume carries exactly the same values, diligence and wonder as the first continuing editor Russ Kick’s mission to provide the world’s great literature as comics and visuals. It begins by jumping into the 19th century, starting with Alice Duke’s adaptation of Samuel Taylor Coleridge’s Kubla Khan and ends at the century’s close with John Coulthart taking on Oscar Wilde’s Picture of Dorian Gray.

Literature flourished in the 19th century, and by its end the novel sat comfortably alongside poetry as a recognised form of expression, having been in its infancy when the century began, which is reflected in the chronological contents. Among others, snippets of Anna Karenina, Crime and Punishment, Frankenstein, Huckleberry Finn, Jane Eyre, Middlemarch, Oliver Twist and Pride and Prejudice are presented alongside poems by Keats, Rimbaud, Shelley, Whitman and Wordsworth. Kick, though, extends the remit beyond fiction to works that shaped humanity’s thinking and conveyed experiences, so there’s space for Nat Turner and Frederick Douglass’ experiences of slavery, Charles Darwin’s Origin of the Species and Nietzsche’s Thus Spake Zarathrustra. Overall, this time it’s not just the well read who’re likely to have come across the works included, many surely listlessly thumbed during high school English classes.

As before Kick supplies an enlightening contextualising essay to preface each entry, and individual interpretation is preferred to direct adaptation, with Kick’s only rule being creators should stick to the original work, and not create sequels. It’s also important to bear in mind that the term ‘Graphic Canon’ encompasses illustrations as well as comics. The Scarlet Letter is supplied solely by a single powerful illustration from Ali J, transcending any lack of knowledge about the book. Artistically, Kick has extraordinarily broad tastes, and a fair amount of what’s here isn’t going to appeal to readers unable to appreciate anything beyond the figurative. Some matches are extraordinary, like the simplicity of John Porcelino’s illustrations suited to the life described in Walden, but perhaps not everyone will be as enthusiastic as Kick about thirty pages of Tara Seibel’s sketchy portraits overlaid on large print text from Les Misérables. It’s an art project, not an adaptation.

Novels are excerpted, which is occasionally frustrating, but hell, this is great literature, so read the original. Some creators adapt passages specifically for the collection, others like Hunt Emerson’s Rime of the Ancient Mariner and Danusia Schejbal and Andrzej Klimowski’s Dr. Jekyll and Mr. Hyde are available complete and separately. The methods of adaptation are as varied as the works themselves. Lance Tooks skilfully blends illustrations and text for a complete rendition of Mary Shelley’s The Mortal Immortal, while Kick settles for S. Clay Wilson’s illustrations along with the complete text of some Grimm Fairy Tales, and some collected by Hans Christian Andersen. They’re suitably debauched. Shawn Cheng’s sample art is from a complete comics adaptation of a lesser known Grimm story. Edgar Allen Poe is represented by Gris Grimly’s montage illustration, Yien Yip’s complete adaptation of The Raven, and text of poems and short stories illustrated by Maxon Crumb. Tim Fish manages to adapt roughly the first half of Wuthering Heights in fifteen pages of Eisneresque cartooning, which is some achievement.

The right hand sample art is one the extraordinary illustrations provided by Matt Kish to accompany Moby Dick. A few other highlights include Diana Evans depicting the bright beauty of nature to accompany Emily Dickinson’s wonderful I Taste A Liquor Never Brewed, the selection of Alice illustrations, and Sandy Jimenez’s wordless adaptation of Ambose Beirce’s An Ocurrence at Owl Creek Bridge. 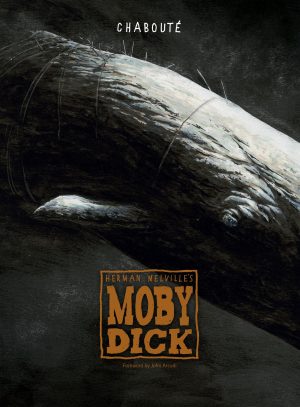 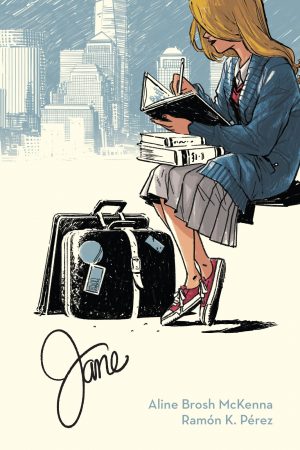