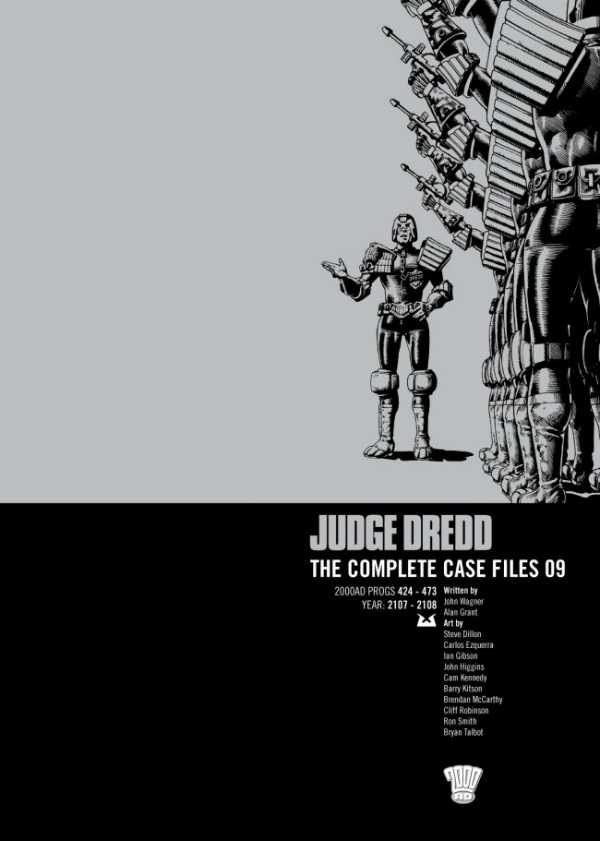 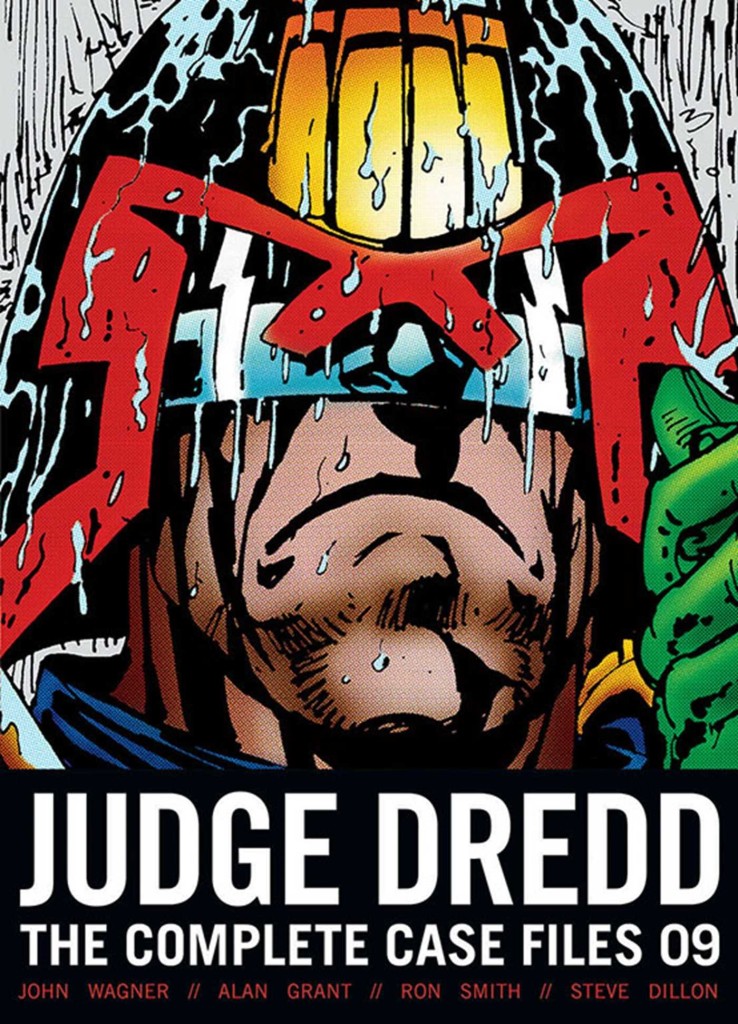 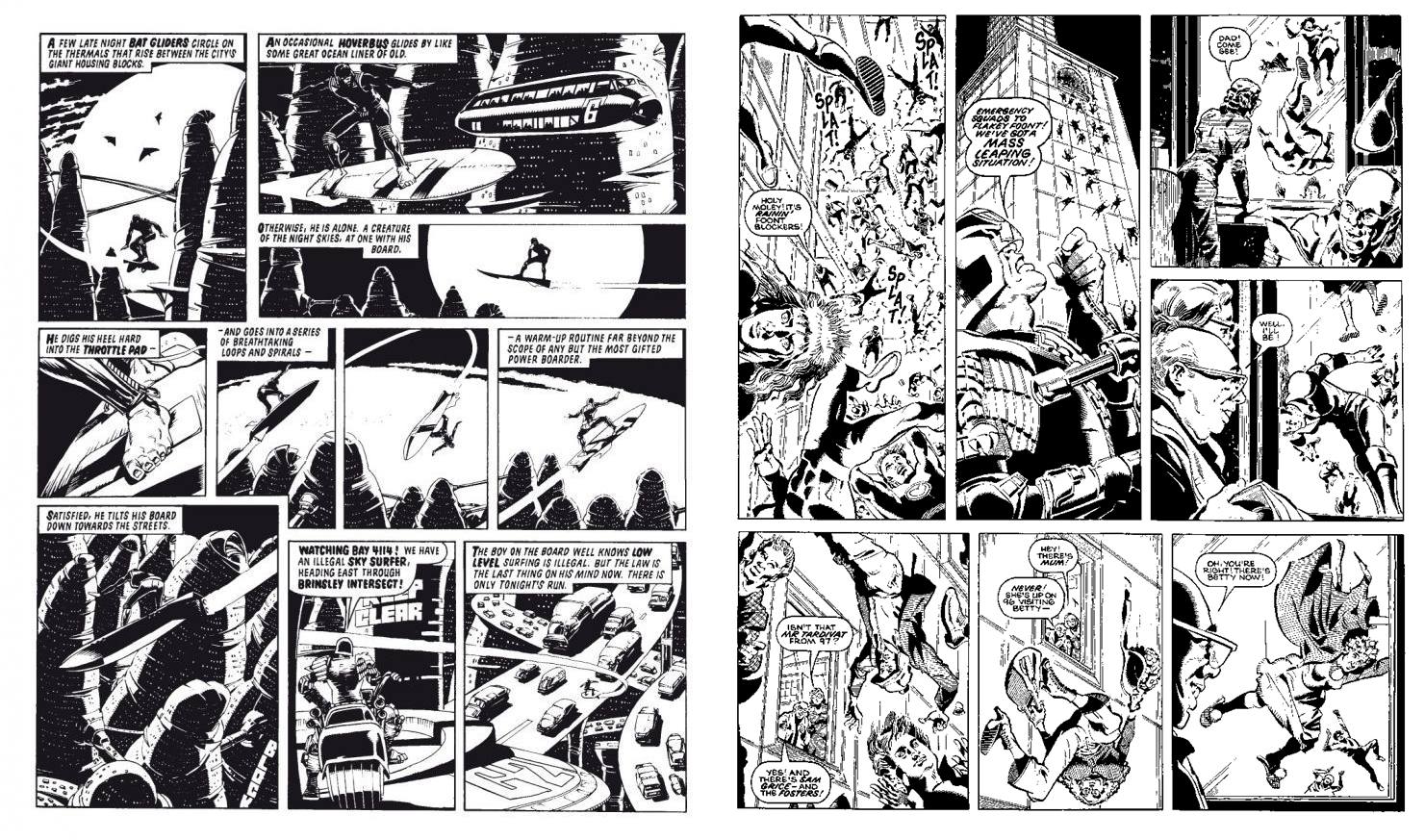 After the patchy Case Files 8, Judge Dredd writers John Wagner and Alan Grant return to form immediately. In contrast to the previous two volumes, rambling extended stories are kept to a minimum, with only four running beyond two episodes. The self-contained material is back to idea packed gems, but there’s a shifting of artistic duties. Ron Smith, so long the workhorse on Dredd, ceased juggling duties on the daily newspaper strip with stories for the comic, and Cam Kennedy picks up the slack.

It’s Kennedy who illustrates ‘Midnight Surfer’, opening with a serene gem of a chapter as Chopper fires up his powerboard and skysurfs through the city in preparation for ‘Supersurf’. It doesn’t drag over five chapters, unlike the later ‘Warlord’. Kennedy also takes on the Fatties with ‘Magnificent Obsession’, Wagner and Grant still managing to deliver funny new material on a favourite topic, and ‘The Big Sleep’ has an inept enforcer on Kennedy’s magnificent design for a skycycle.

Nosferatu is a humanoid alien spider feasting on the residents of Mega-City One. It delivers a weakness in Ron Smith’s art, with his style too clean to deliver the story’s full horror. The best Smith strip here is ‘Lemming Syndrome’, a black look at mass hysteria and the judges’ reaction to it. Otto Sump is back along with the hilarious adverts that Wagner and Grant always insert into his stories, selling sweets claimed to increase intelligence, refuted by official research. It would be Sump’s penultimate appearance, and many years before his return. In ‘Megaman’ a superhero arrives in Mega City One with predictable consequences, and ‘A Day at the Block Wars’ is an amusing script about Dredd having to address a class of cadets while dampening a major outbreak of violence. After five solid years Smith’s penultimate weekly Dredd strip is a relatively low key effort about a scavenger who preys on the victims of crime. He bows out with one last story in Case Files 10.

This volume’s vital piece is the ‘Letter from a Democrat’, illustrated by John Higgins, which was a signifier of major things to come. In Thrill Power Overload Grant reveals the original premise was the judges suppressing nudism. When the editors put the kibosh on that, he and Wagner substituted the theme of democracy, created a far stronger effort, and from such happenstance story after story flowed, culminating in epics. An even more blatant example of the control the judges exert to preserve their perception of what’s good for people is ‘The Man who Knew Too Much’, with this collection’s only Carlos Ezquerra art.

Topping the remaining content, Ian Gibson obviously enjoyed himself on ‘It Pays To Be Mental’, a quirky script about a citizen who sees through the fourth wall to narrate his own fate. Three artists make their Dredd debut, Higgins, Bryan Talbot and Barry Kitson, none on stories of any great distinction, and Brendan McCarthy returns after several years for ‘Riders on the Storm’, a mood piece set during a freak thunderstorm. It can also be found in volume 16 of Titan’s 1980s reprint collections, and for those preferring their reprints on better quality paper, all but one of the Ron Smith stories appear in volumes 14 and 24, the Cam Kennedy material is scattered through volumes 13, 15 and 17, and Gibson’s are in volume 19.