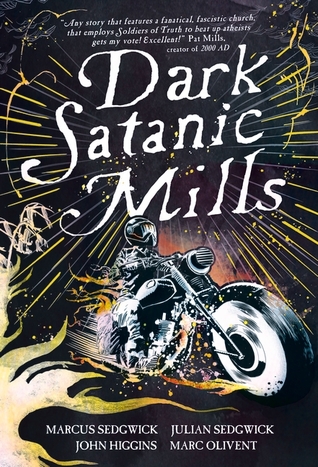 In a near future Britain plummeting faith in a corrupt political system and science in thrall to corporate interests has led to a resurgent church requiring only faith and obedience. The True Church have their own militia, deal with unbelievers in brutal fashion, and there’s been some form of never explained conflict that has left areas of Britain as burned-out, radioactive or impassable.

Into all this rides motorcycle courier Christy. Stopping to prevent someone being beaten up causes her to arrive late for her final delivery of the day and thereby to witness a murder. In rapid succession she loses her job, becomes a wanted person and finds herself on the run.

The strained references to William Blake’s Jerusalem apart, and later forced repetition of Yellow Brick Road mentions, this has the episodic feel of a traditional British boys comic serial. One event after another is thrown at the capable hero, but seemingly with no real thought as to what the ending might be. When it comes, it’s highly improbable given the resources the True Church have at their disposal.

Overall, there’s very little imagination applied by young person’s fiction author Marcus Sedgwick, collaborating with his jack of all trades brother Julian, and what’s a reasonable premise for a story takes the most mundane turn at every possible juncture. Comics are able to deliver the universe, and here we have barely anything that couldn’t be seen in a cheap film, leading to the suspicion that this is intended as nothing more than storyboards to throw onto a prospective financier’s desk.

That could be possible due to clarity of John Higgins’ black and white art. He’s been in the business long enough to break down genre-cliché tosh in his sleep, and supplies some spectacular spreads and fine illustrations of the sleek and futuristic 1970s Citroën DS. Quite what the cover-credited Marc Olivent’s contribution might be is never clarified.

It’s interesting, if confusing, to see a cover quote from the Dark Satanic Mills himself, Pat of 2000AD fame, but his recommendometer has gone wonky, and the book’s not nearly as interesting as he makes it sound. There are literally thousands of graphic novels to work your way through before even considering this.