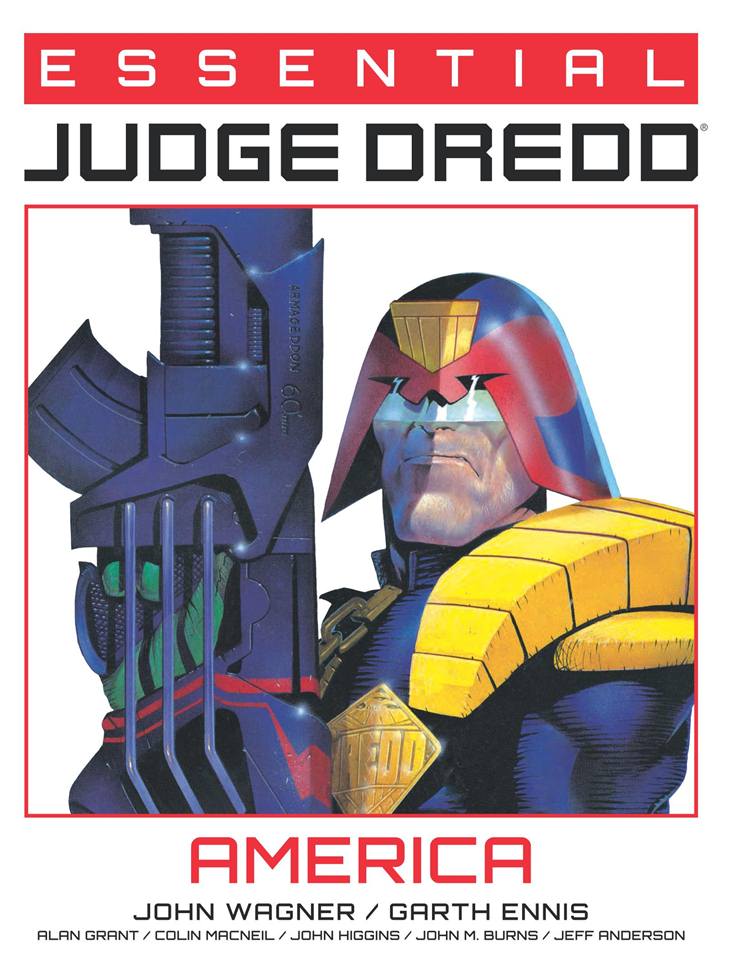 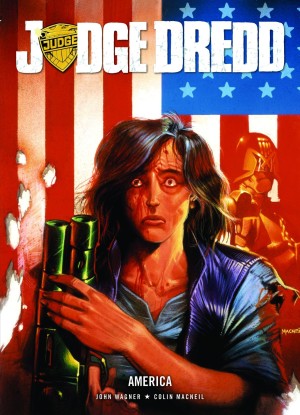 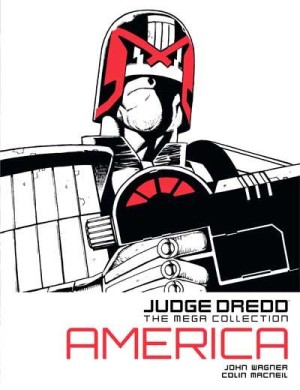 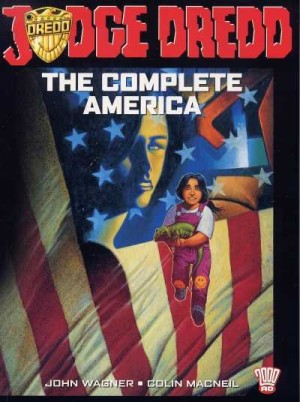 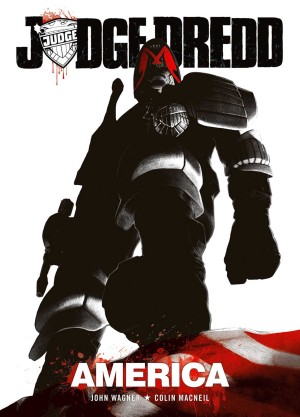 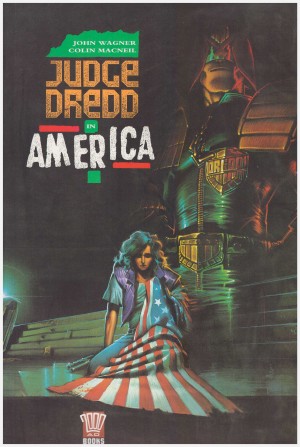 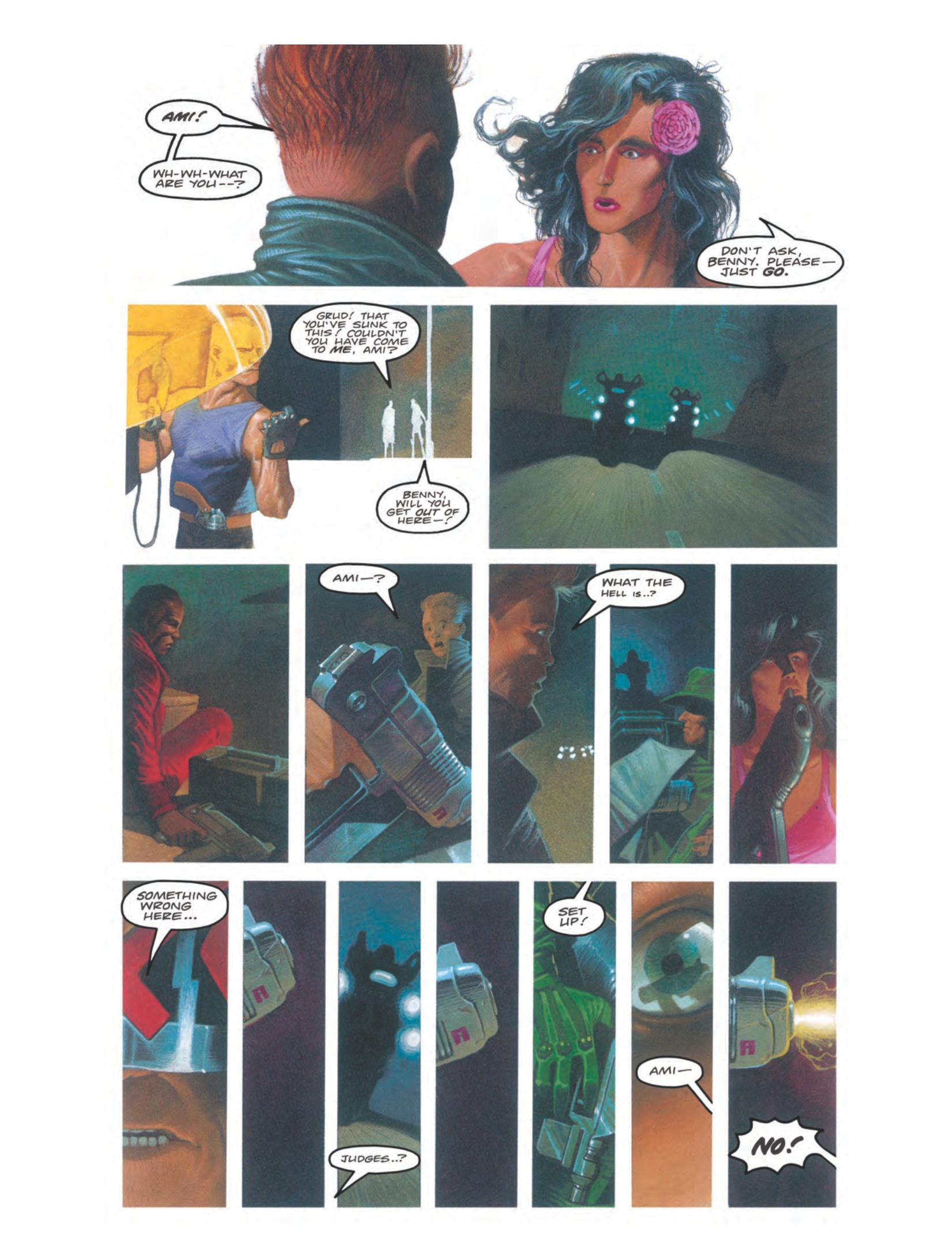 It’s a rare, and frankly deluded, best of Judge Dredd list that doesn’t include America, and it was surely no surprise that Hachette chose it to lead off their partwork series of Judge Dredd: The Mega-Collection.

A primary reason America is so memorable is that it works completely against type. An early caption reads “This is a love story”, and it is. More typically, John Wagner opens his tale with Judge Dredd glaring down over the city while a caption intones “I stand four square for justice. I stand for discipline, good order and the rigid application of the law. Grud help any limp-wristed liberals who say different.”, and shortly after “Justice has a price. The price is freedom.” It’s a fantastic encapsulation of Dredd and his society accompanied by an equally stellar portrait of Dredd from artist Colin MacNeil, accentuating the intimidation by a viewpoint looking up at the sole of Dredd’s boot.

Dredd, though, is largely peripheral to this story, although his metaphorical boot is all over it. The majority of the narration is supplied by Benny Beeny, for whom a childhood friendship blossoms into unrequited love. America Jara, though, is politicised from an early age, believes in democracy and escalates into taking direct action to support her beliefs. When they meet years later Benny is a successful comedian, and America a wanted woman, but his love has never wavered. Unfortunately it’s clear from Benny’s opening lines that no happy ending is on the cards, and when it comes it’s classic Wagner perversity.

When originally published in 1990, America was serialised in the Judge Dredd Megazine, then a new titled aimed at an audience who’d grown up with Dredd and his world, and were now adults. For this market Wagner didn’t have to write his story in broad strokes, so supplied a more subtle and nuanced characterisation. He shows Benny ruled by fear from an early age; fear of rejection, but primarily fear of the system. He might poke gentle fun at the system in his act, but it’s plain he’s tame and safe, the company satirist, Michael McIntyre rather than Frankie Boyle.

MacNeil’s acrylic art is wonderful, shifting tone along with the story from the bright hope of childhood to the darkness of the future. The scene set during Benny and America’s infancy is marvellously paced, his depiction of them pitched just right, and their progression from children to adults is well considered.

America didn’t require a sequel, but success and acclaim bred demand, and six years later Wagner succumbed. To his credit, ‘America II’ is a decent story also calculated to pull at the heartstrings, and with a caption echoing the opening of the previous story as a judge is arrested. MacNeil’s art, though, is perfunctory beyond a fine pin-up page of that arrest. He’s on better form with pen and ink (or tablet equivalent) in 2006 for a more tenuous follow-up as a Cadet Beeny progresses through the Academy of Law. She’d become a regular supporting character in Dredd’s world.

The original America is five star Dredd and easily worth the purchase of this book alone, and as might be expected from a contender for the best ever Dredd story, it’s been repackaged several times. The 2020 Essential edition surrounds the story with contextualising material, with good stories by Wagner well drawn by John Higgins, Jeff Anderson and John M. Burns making for an attractive package.