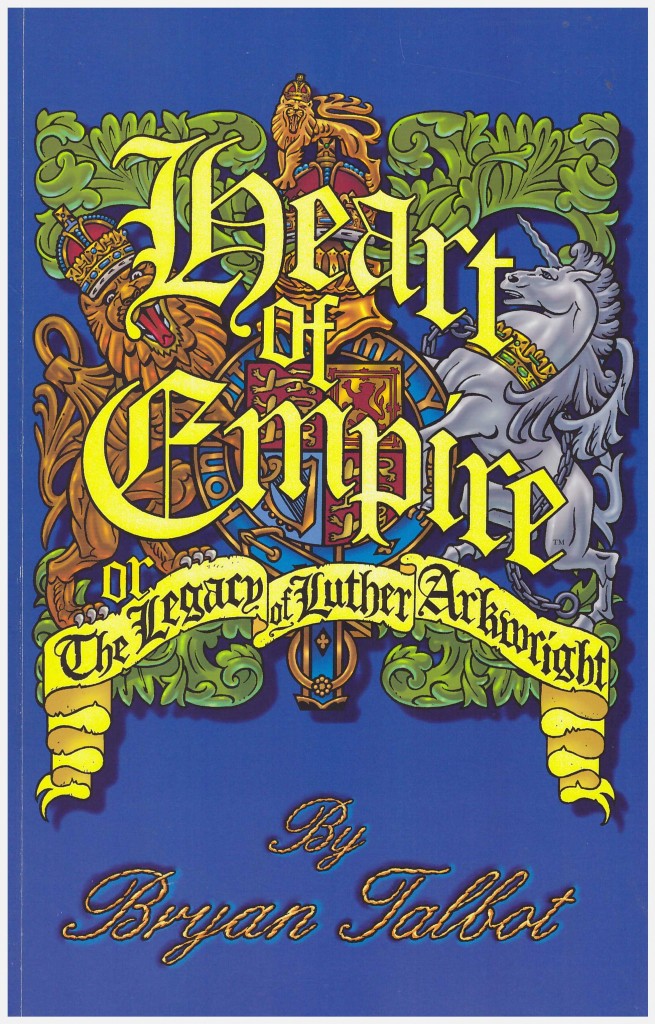 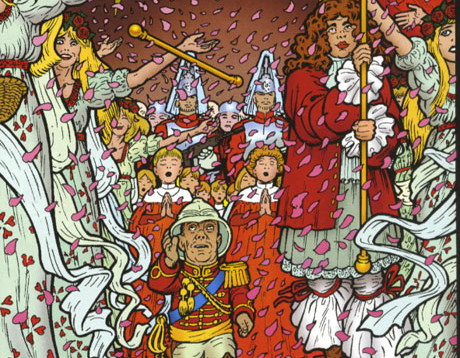 Bryan Talbot has always been an ambitious storyteller, and Heart of Empire dips back into the world of one of his earliest characters. The Adventures of Luther Arkwright was influential spirited experimentation, but very much running before learning to walk. Heart of Empire is a far more satisfying experience, and can be consumed without any reference to the previous material.

The setting is 23 years following Luther Arkwright’s intervention in a Puritan-run England on an alternate Earth, his participation mythologised since his disappearance. Queen Anne rules a British Empire with an iron fist fending off constant coup attempts, and a Vatican not willing to let any nation lapse from catholicism. The heart of the empire, though, proves to be Princess Victoria, an exceptionally gifted architect and designer, yet so frail and sickly she can never leave London.

There’s also a great threat pending, and those with some psychic talent are made aware via portents. Among them is Victoria, suffering debilitating migraines as she explores London’s secret underbelly, and discovers truths contradicting what she’s learned during her upbringing. It also becomes pivotal that Luther Arkwright disappeared after his greatest victory. He’s presumed dead, but is he?

Heart of Empire‘s ambition matches that of its forerunner, but it’s created by a man who’d mastered his craft. Considerable thought went into just designing the society that forms the background, a mash-up of historical fashions and architecture with up to date technology. Talbot’s then populated that world with some memorably diverse characters. There’s an odious Vatican envoy, addled alchemist John Dee, fawning and conniving court painter Sir Joshua Hirst, and Talbot‘s extraordinarily unsentimental about his previous cast, with none the heroic warriors they were.

Blending is key throughout. Although not immediately apparent, Heart of Empire has a hard science fiction core with underpinnings of Eastern philosophy. The recurring strange patterns have a relevance, and the state of Victoria’s London exudes a karmic resonance beyond its dimension. If this all sounds a bit dry, rest assured that humanity is integral, and it’s undercut with humour throughout, with flatulence and caricature to the fore. This is immensely enjoyable adventure, beautifully drawn and uplifting.

Talbot was an early adopter of computer technology as it applied to comics, and issued an accompanying CD-Rom with a wealth of background material. It includes page by page annotations to every chapter, the complete Adventures of Luther Arkwright in digitally restored fashion, and every available page from Heart of Empire in pencilled, inked and coloured versions.

Some bonus elements are included in the collection, including a series of well-designed posters, playbills and fake articles referencing Victoria’s society. You’ll probably have to be British and of a certain age to draw a chuckle from the thought of Brian Glover playing Oliver Cromwell, but everyone can enjoy snooting.

Both Arkwright books have now been collected as Arkwright Integral by Dark Horse.