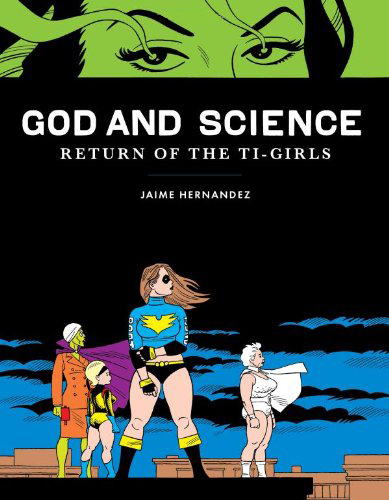 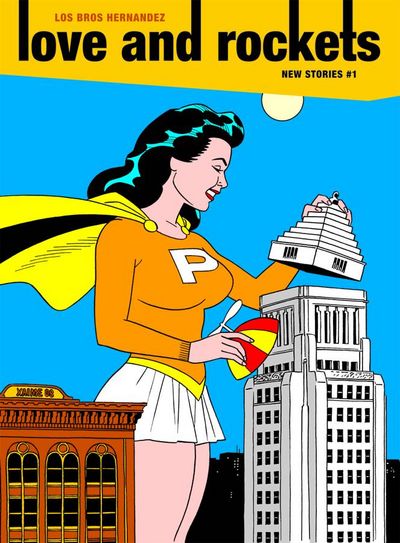 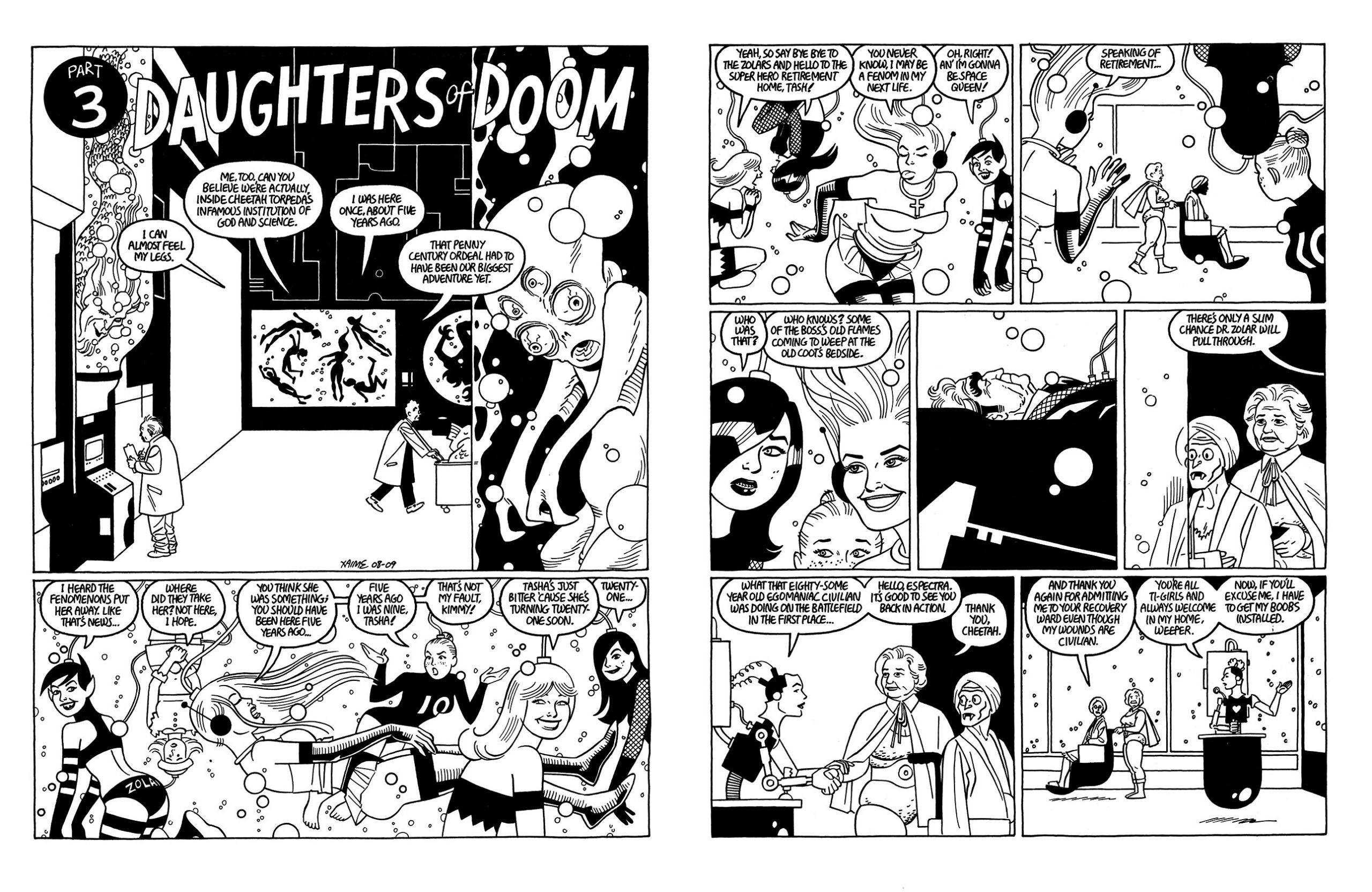 God and Science: Return of the Ti-Girls is a revised version of a story that was originally serialised in Love And Rockets New Stories 1 and 2. In this book Jaime Hernandez does the last thing that his regular readers would expect. He delivers a superhero adventure filled with the fantastical, exhilarating craziness that he had dropped years ago as he took Maggie Chascarillo away from fantasy and into naturalism. The exuberant cast of larger-than-life supporting characters gradually faded out of sight, even H.R. Costigan’s horns were given a reasoned explanation and for a long time, the only superheroes in Maggie’s world were the ones in the old comics that she bought from under the table at local comics shows. But one night after Maggie tells her friend Angel about their mysterious neighbour who she thought she saw exhibiting some impossible abilities, they discover that there really is a superhero living in their apartment complex – and she is there because she is looking for a lead on Maggie’s oldest friend Penny Century. In early Locas stories, Penny is obsessed with becoming a superhero herself and it turns out that finally, she has got what she wanted. But if there’s one person who probably shouldn’t have powers and abilities beyond those of mortals… it’s Penny.

This is just the beginning of a brilliantly staged adventure that introduces dozens of new superpowered women and reintroduces a few old friends from various periods of Maggie’s life who all turn out to have been hiding their powers too. As for the charming Angel, Maggie’s flatmate and a great athlete, she turns out to be a superhero in training herself. Hernandez takes all the traditional tropes of superhero comics and applies them into a delirious, fun yet carefully thought-out blend of big fights, weird villains, magical deals, superteams and super rivalries. At the centre of it all, there is a genuinely moving exploration of love, motherhood and the meaning of family.

For the collected version of God and Science, Hernandez adds to his original 100-page story with an extra thirty new pages that expand several key scenes. There’s a new epilogue, and he includes some special chapter breaks that are in colour: the covers to four issues of Ti-Girls Comics. Those Ti-Girls covers alone are worth picking up this book for, harking back to early Love and Rockets so powerfully that fans will be misty-eyed. But they are just the icing on a magnificent cake as this story unfolds at a breezy pace with enough drama, twists and nuttiness balanced with poetry, invention and beautifully drawn, dynamically-choreographed action to satisfy the most hardcore of superhero comics aficionados.

Hernandez demonstrates with a great deal of panache how it’s possible to make superhero comics satisfying to adults without falling into the “grim and gritty” pit of violent and misogynistic excesses of the industry’s last few years. God and Science is what the superhero genre desperately needs: smart stories with heart and soul as well as powers. It’s a bravura piece of work that will have you cheering and wishing there were more books like it, and can also be found in Angels and Magpies.