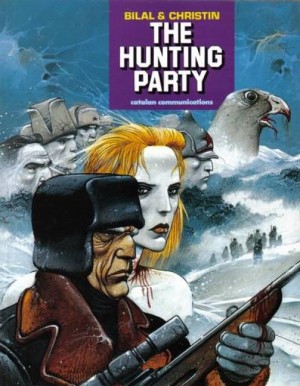 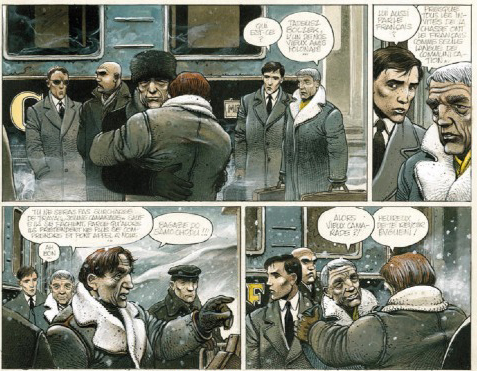 The Hunting Party, a pre-Eastern Bloc collapse behemoth of a graphic novel, by long time collaborators Pierre Christin and Enki Bilal, is a complex political thriller in which influential people from a range of countries gather for what on the surface appears to be a social event. It’s a hunting trip organized by one of the great men of the Communist regime, now partly paralysed and unable to speak. Most of the attendees owe huge debts to Vassili Chevchenko, whose political career goes back to Lenin’s time and who miraculously survived countless pogroms, uprisings and coups.

The story is told from the viewpoint of a young French translator who is being shepherded around by Chevchenko’s personal aide and translator, Golzov, and through the flashbacks of other characters. Golzov relates Chevchenko’s life story, but explains that there are necessarily as many versions of his life as there are versions of history, in a state which wrote and rewrote the official Party viewpoint under different leaders, and removed disgraced figures from paintings and photographs.

As the former comrades gather and discuss old times, it soon becomes apparent that present day politics is still very much on the agenda for all of them, even the ones who are supposed to have retired, and the gathering is more than old friends and allies getting together to reminisce.

Pierre Christin has always had a fondness for politics, and here he looks at the future of the Soviet block and how it can move towards becoming a more liberal country. It is a complex situation to map out, and he admirably balances the desire to tell a taut story with the need to explain how the characters came to be where they are. It is, however, text heavy, and it is a tribute to the strength of Bilal’s graphic style that the mass of text in places does not swamp the panels.

Bilal’s long-faced, distinctly outlined people set among brooding, detailed landscapes serves the story well. His facility for maintaining likenesses comes to the fore when drawing a series of old men that need to be depicted during various stages of their lives.

The Hunting Party is Bilal and Christin’s finest collaboration without a doubt, with its classic structure of the outsider feeling his way through an explosive situation, its subtle visual storytelling, its challenging theme and haunting illustrative style.

The Humanoids version of the story, translated by Justin Kelly, offers a more nuanced experience than Elizabeth Bell’s slightly flat but still gripping version for Catalan, which was also reprinted by Titan Books in the UK. The 2000 edition is more sumptuous, and in hardback format, matching their reissue of The Black Order Brigade. It’s the one to go for if you have some budget to spend. The cover is also much more evocative and better designed than the original English editions.