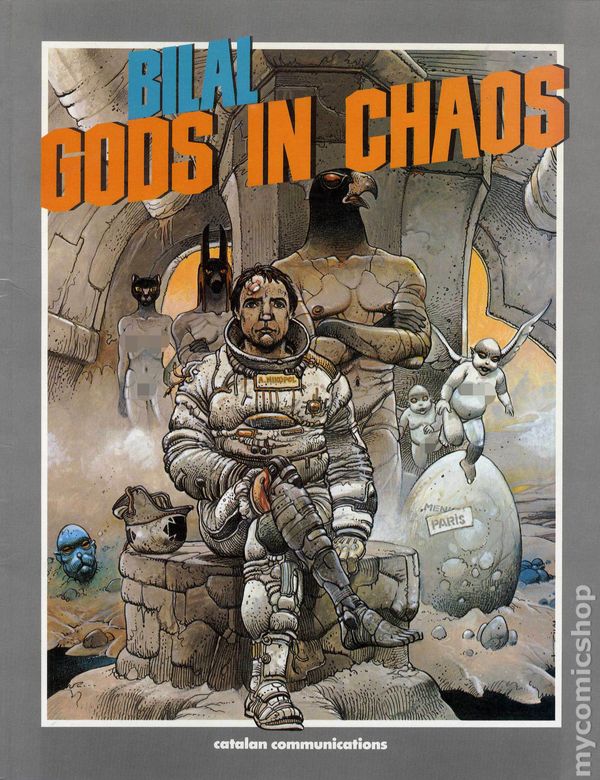 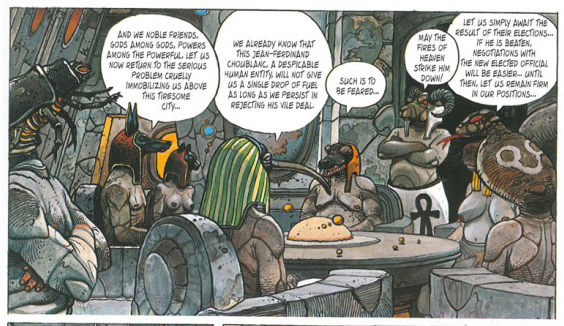 Enki Bilal’s sci-fi political satire, Gods in Chaos, imagines a near future Paris visited by aliens in the form of the Egyptian pantheon, roaming in a flying pyramid, hoping to refuel their spacecraft. Their demand for fuel would drain the city dry, but the city’s current dictator, who bases all his speeches and slogans on Mussolini, is willing to do this in return for immortality, which the gods have promised him. The future Paris is divided into a rich inner sector and a poor outer one, where the spaceport is situated, full of mutants, aliens, diseases and other dangers – a rather hoary sci-fi cliché given new life by Bilal’s excellent realistic artwork.

Bilal’s detailed and heavily textured art, extremely nicely coloured in this edition, is well suited to creating this grimy, decaying world; his visual imagination runs riot with visions of animal-headed gods playing Monopoly, a one legged astro-criminal crash landing to earth, cherubic aliens breeding like rabbits and giant slugs living up the Eiffel Tower. Slightly alien cityscapes that still have a very firm connection with a reality we recognise and dripping underground tunnels, full of decaying echoes of the old Paris, create the perfect atmosphere for this story of corrupt regimens and vengeful gods.

Horus the Egyptian sky god, who’s gone rogue, is able to inhabit the body of the exiled space criminal, repair his leg and, through mind control, engineer the political arena to be elected the next president of Paris. However his manipulations are soon noticed by the hovering gods, who try to intervene. Most of the story, and the humour, is developed in discussions between the two beings inhabiting one body.

Although created in 1980 Bilal’s pointed comments remain relevant and interesting, if somewhat broadly aimed. His humour is wry rather than biting, and he manages to combine it with ideas that, while perhaps not the freshest, together provide an entertaining package.