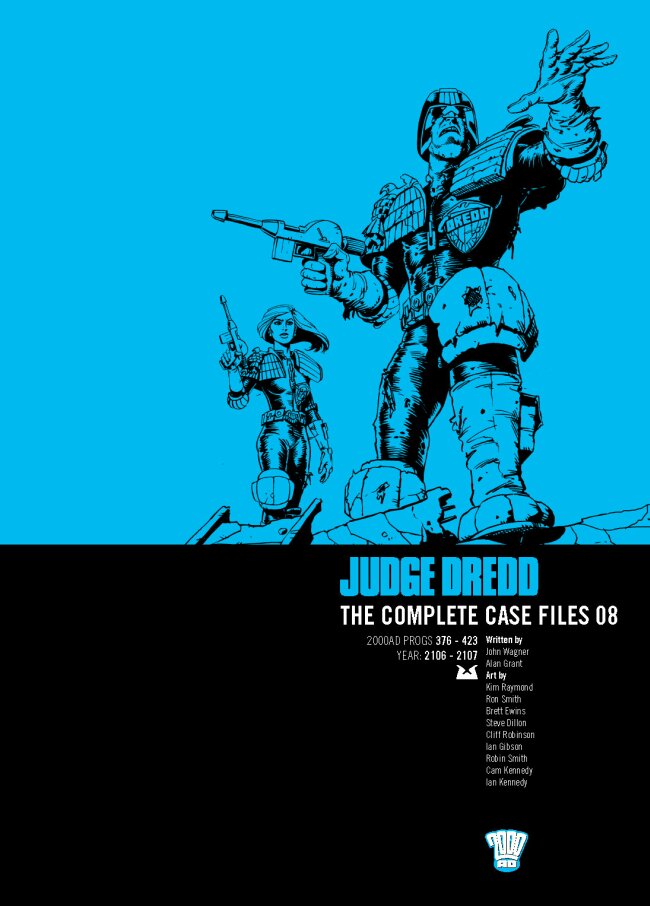 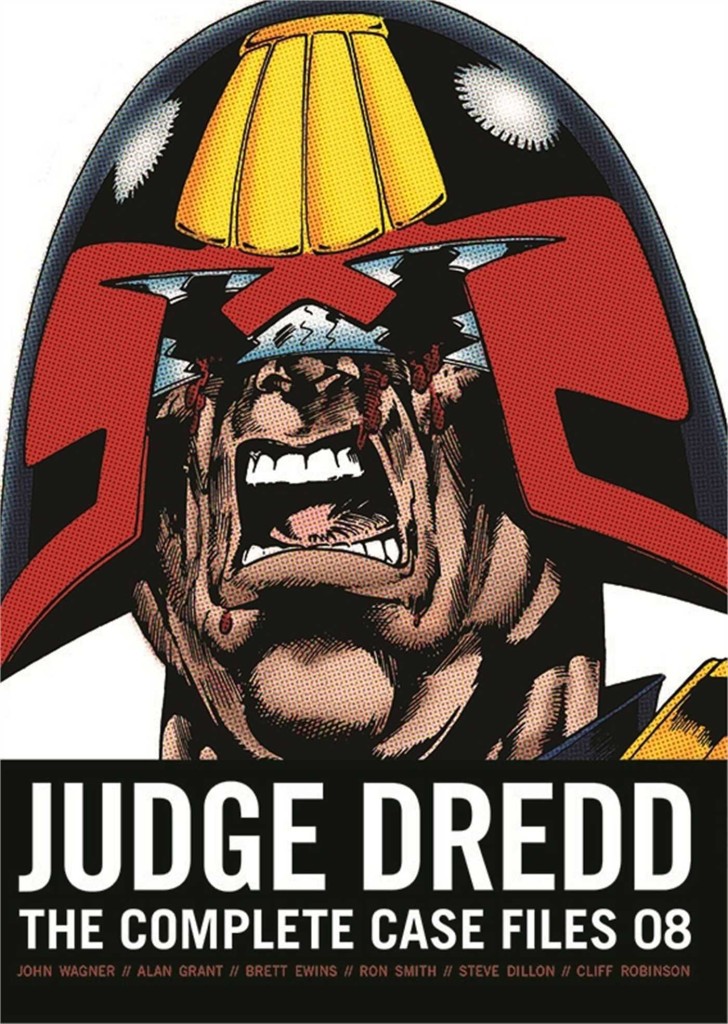 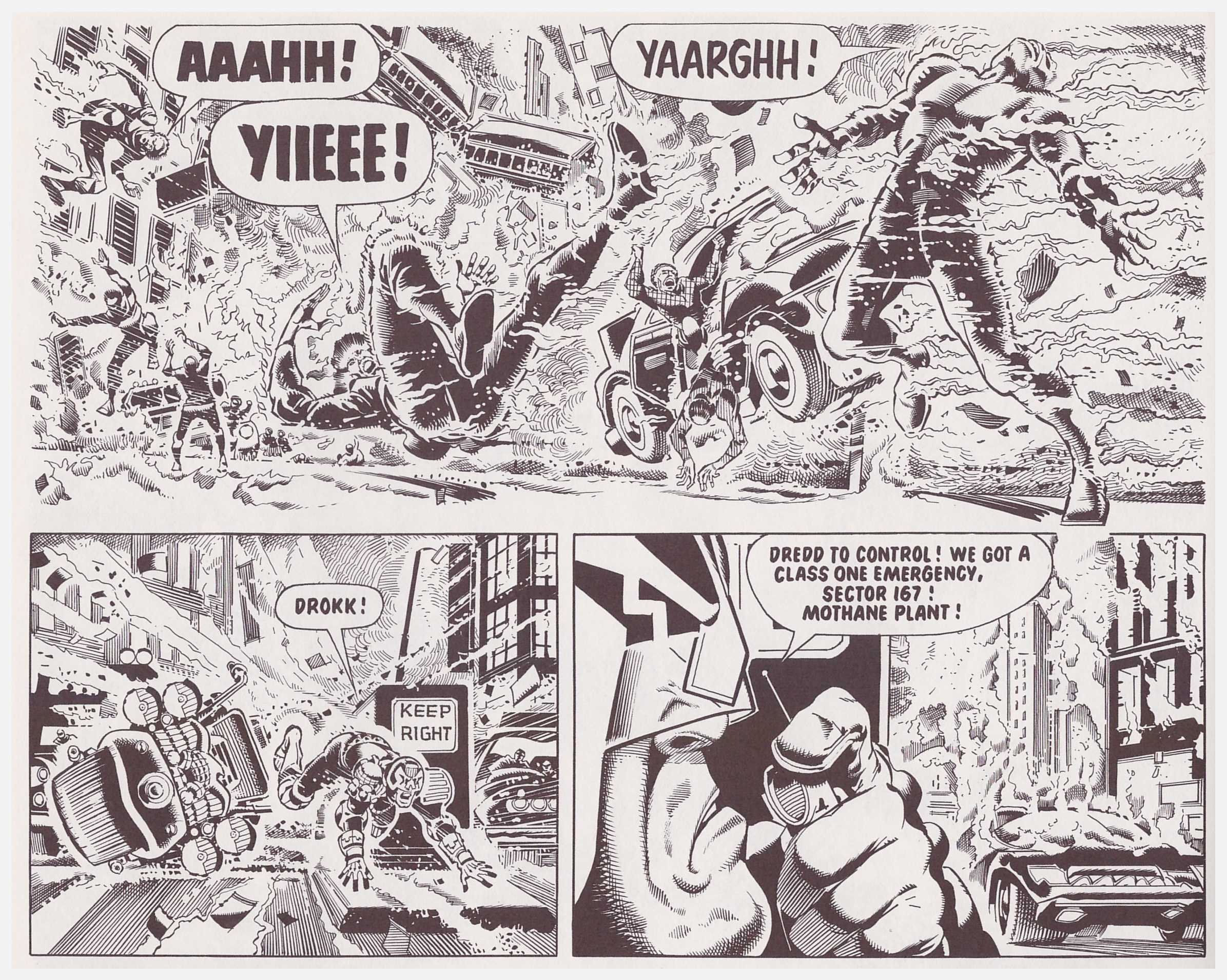 When the stories that open this collection were first published John Wagner had been writing Judge Dredd for seven years, four of them in collaboration with Alan Grant and for five averaging at least one Dredd tale every week (the total including specials and annuals). In hindsight it’s astounding that the level of quality was maintained for so long. Even more remarkable is that while Case Files 8 is the poorest quality collection since the first, it was a temporary blip and the quality curve soon moved back up again.

Dissatisfaction with the calibre of the artists available has been cited as reason for Wagner and Grant seeming to lose interest, and in terms of art this is also the poorest volume since the first. Kim Raymond’s version of Dredd is universally unpopular, and with the exception of the volume’s workhorse, again Ron Smith, and some Ian Gibson strips there’s not a lot of art to become excited about.

Possibly by virtue of his work rate Smith illustrates most of the better stories here. The best of them is ‘The Hunters Club’, with chapters also drawn by Steve Dillon and Cliff Robinson, making his Dredd debut. It features an elite who randomly murder after informing their victims of their target status. There are comic moments, but this is a crime thriller territory overall, as is the later ‘Unspontaeous Combustion’ and Smith’s adaptable style copes well. His art elevates ‘Dredd Angel’, which starts promisingly as a teaming of Mean Machine and Dredd, but rapidly dissolves into retreading old ground. ‘Question of Judgement’ is a spirited beginning to a three part sequence, but the over the top sentimentality of the middle chapter and an ordinary conclusion indicate Wagner and Grant had little interest in the idea of Dredd questioning himself.

The longest strip in this collection was intended as an epic serial, but Wagner and Grant concluded ‘City of the Damned’ earlier than planned, realising themselves it wasn’t working out. It followed up the prediction prompting the Judge Child Saga, that Mega-City One would be involved in a terrible war. Mega-City technology permits a jaunt to the future accompanied by Psi-Judge Anderson to discover a devastated city over-run by vampiric judges under the thrall of a mind-controlling mutant known to Dredd beyond his disguise. Even Dredd meeting his future counterpart can’t save this story, and four artists over fourteen episodes indicate editorial problems.

The best of the remaining material is the Brett Ewins illustrated ‘Wally Squad’ detailing the perils of judges working too deep undercover a full 30 years before similar revelations were made about British police infiltrators, while Raymond perhaps wasn’t the best choice of artist for a decent script on the prank-based ‘Spugbug’. Dredd’s method of inducing a confession in the case of Hagatha Smeld is novel, and the Smith drawn ‘Thirteenth Assessment’ is one of Wagner and Grant’s regular reminders of what it takes to be a judge. That along with ‘Dredd Angel’ is gathered on better quality paper in the 12th volume of Titan’s 1980s Dredd reprint series.

Mention should be made of ’99 Red’, the only Dredd story illustrated by British comics stalwart Ian Kennedy. It’s a shame he wasn’t given a better strip than this effort of a judge running amok.