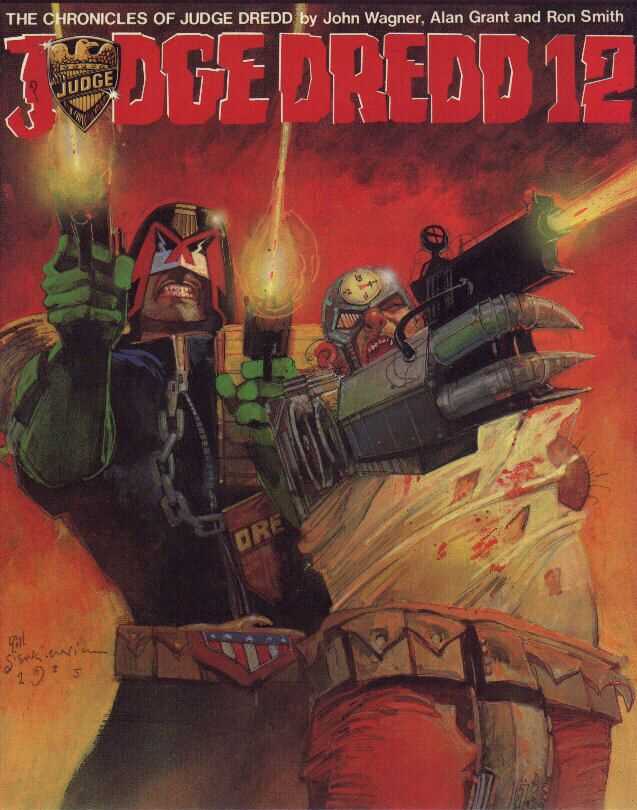 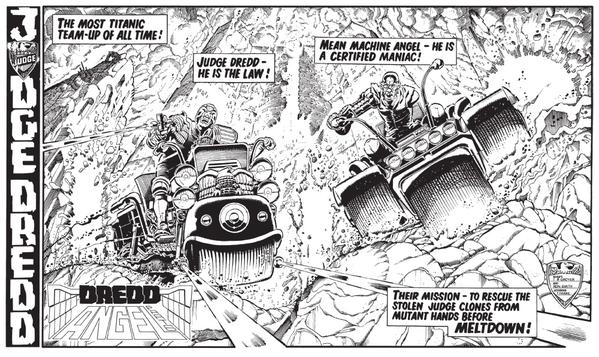 Introduced during the Judge Child Saga, Mean Machine Angel was an inspired creation, a psychopath with a robotic arm and a dial on his head that controlled his levels of rage. Realising it had been a mistake to kill him off, writers John Wagner and Alan Grant rapidly resurrected him, and in ‘Destiny’s Angels’ have him accompany Dredd on a trip into the Cursed Earth. Setting their stall out from the start, the writers have Mean’s co-operation contingent on brain-adjusting surgery after which he sees Dredd as the image of his father. The reason for the trickery is that a crashed cargo transporter was carrying clones of some of Mega-City’s greatest judges, but conveniently it was also transporting the treasures of Liberace’s tomb, enough to have Mean Machine salivating. It’s a good set-up, and over the seven chapters before the inevitable occurs there are a few decent moments, but for the most part there’s a definite feel of re-treading old ground.

Since discovering that some fans didn’t realise Dredd and his society were satirical, Wagner and Grant regularly slotted in strips showing what bastards the judges really are, and ‘Thirteenth Assessment’ is a clever and brutal strip. The title refers a periodic test potential judges take to determine their continuing fitness for training. It takes the form of determining the actions of a street judge on duty. Cadet Brisco not only lands Dredd for his assignment, he also finds the test more personal than anticipated.

The title of ‘Casey’s Day Out’ rather shines a spotlight on the conclusion as former gangster Casey is released after a twenty stretch allegedly fully rehabilitated, but with enemies that have long memories.

It’s testament to the high quality set by Wagner and Grant, and their prolific output, that what would be perfectly acceptable material from other writers falls below their standards, and this volume isn’t the best in the series.