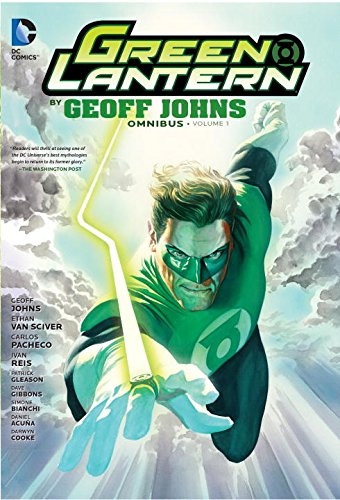 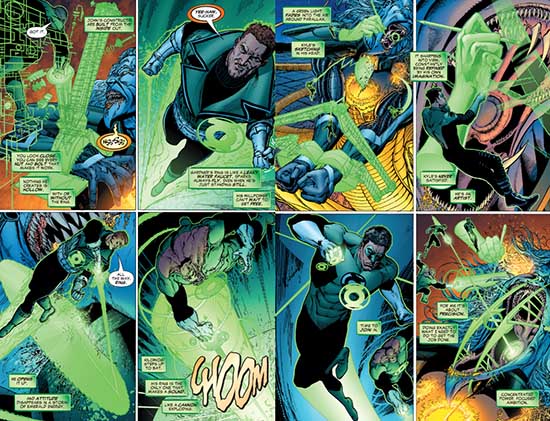 The editors and writers responsible would obviously disagree, but in Green Lantern was in a sorry state in 2004. Too many short-term sensationalist plots designed to ensure sales spikes through shock had left the franchise too far removed from the finely tuned set of core elements that initially intrigued. Geoff Johns was able to sort out the mess, restore dignity and refit the feature for 21st century use within a mere six chapters. That alone was some achievement, but what was originally published as Rebirth is also a suspenseful and compelling superhero story incorporating all those fundamental to the beating heart of Green Lantern. By the conclusion Hal Jordan is back as a Green Lantern and as an everyman superhero.

Johns followed that in the company of Dave Gibbons providing a more linear makeover for the Green Lantern Corps as Recharge. Those open this hardback, with the respective art of Ethan Van Sciver (featured as sample image) and Patrick Gleason impressing even more on the oversize pages.

Having established his direction, Johns continues as he began, concentrating on Hal Jordan, with twisting plots that all feed into what he is, and why that’s the case. His lack of fear was instrumental in his appointment as a Green Lantern, yet a minute portion remains to be exploited, and that eventually leads into this books finale, originally published as The Sinestro Corps War. It may be a harbinger of much that would come, but the close-focus concentration on a continuous series of battles with barely any respite renders it the least creatively successful segment.

Elsewhere Johns drops in every one of Hal Jordan’s foes of any significance, even if just in a cameo role (as is the case with Sonar), runs an undercurrent of other Green Lanterns resenting Jordan due to previous transgressions, and splashes his plots over a large canvas while retaining a human perspective. Originally published in paperbacks titled No Fear, Revenge of the Green Lanterns and Wanted: Hal Jordan, these don’t quite match Johns’ startling opening achievement, but all are solidly entertaining superhero material.

Ivan Reis is the primary artist, and he’s problematical. The talent is there in every aspect other than panel composition. He’s incredibly enthusiastic, packing his panels with detail and figures, but this is often to the detriment of the story, with pages so cluttered they distract and confuse rather than flow. Van Sciver occasionally drops back in, and Carlos Pacheco illustrates the material immediately following the reintroduction. He and inker Jesus Merino are a super smooth team whose pages are well designed storytelling, and Daniel Acuña even more spectacular.

An odd omission, although perhaps understandable at a page count exceeding 500, is the material associated with the Sinestro storyline, of which there’s very little. Geoff Johns completists can locate it as Green Lantern: Tales of the Sinestro Corps. Thankfully there is room for the fine character piece ‘Flight’, illustrated by Darwyn Cooke, a short that really establishes Hal Jordan.

With so much to recommend purchase, one significant drawback should be noted. It doesn’t take much research to discover considerable discontent with the production. Reports are of the spine cracking when the book is opened, although the problem similar books have had with art and dialogue disappearing into the central gutter is absent. As an alternative to this and the original paperbacks, DC have now split the content over two bulky paperbacks, Green Lantern by Geoff Johns Book One and Book Two, with the Sinesto segment scheduled for Book Three.