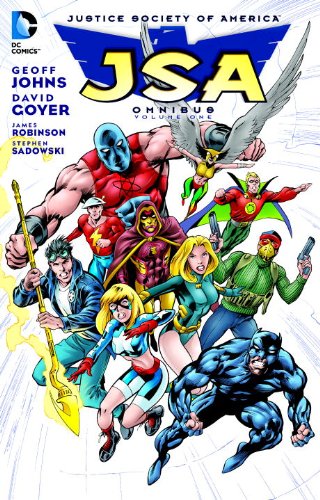 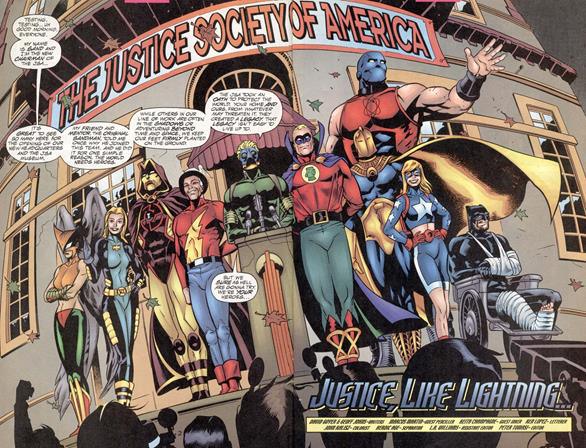 Re-calibrated and fit for 21st century purpose, this was the longest-running Justice Society of America series since the 1940s, and this is a frankly astounding 1200 plus pages gathering together what previously occupied six graphic novels. Here we have the content from The Justice Society Returns, Justice Be Done, Darkness Falls, The Return of Hawkman, JSA All-Stars, the Justice Society and Justice League team-up Virtue and Vice and assorted one-shots and specials.

As might be expected with such a vast assemblage, the content varies, but little is poor. The weakest extended section is All-Stars, which has the present day JSA involved in a daft plot exhorted to concentrate on overcoming their weaknesses, but the compensation is assorted guest creators shining the spotlight on their 1940s counterparts. The joys of these are many, but the standout is novelist Michael Chabon teaming with artist Michael Lark for a tale not of Mr Terrific, but of his lesser known brother. The Justice Society Returns sequence follows the same pattern, with assorted guest creators following an over-arching plot conceived by James Robinson and David Goyer and set during World War II. The villain is a surprise, but the delights are to be found in the extended teamings, with Russ Heath and Chris Weston delivering fine art on their chapters.

The primary artist on the remainder is Stephen Sadowski, who has a fine sense of dynamic composition and humanises what are some of the most powerful beings on the planet. He takes them through an initial reunion that’s not the strongest plotted material from Robinson and Goyer, but really scores by establishing the character interaction and sense of legacy the JSA possess. It also updates Doctor Fate and passes the Sandman mantle.

There’s a great emphasis throughout the JSA run on the entwined nature of the cast. Hawkman and Hawkgirl’s improbable continuity is given a credible explanation involving all previous incarnations as reincarnated souls dating back to 1600 BC. There they were associated with Nabu, first possessor of Doctor Fate’s powers, and Black Adam. He, of course, has history with Captain Marvel, which is prominent in the next volume. Hawkman is also father of the current Doctor Fate, and assorted cast members have taken their identity from the previous bearers of respected names.

As the pages turn there are frequent enjoyable moments of character interaction, but action fans aren’t short-changed as Goyer’s collaboration with Geoff Johns delivers more satisfying plots. The JSA face ageless sorcerer Mordru, the Injustice Society, cult leader and terrorist Kobra, the near limitless might of Extant, and Obsidian, another JSA connection, the son of the original Green Lantern whose mental frailty and contact with the darkness have transformed him.

Goyer and Johns also wrote the teaming with the Justice League in which the seven deadly sins are loosed on the world, making use of some superheroes as hosts. It’s a cleverly plotted slab of superhero action drawn by a master of the form in Carlos Pacheco.

This is an expensive book, but it’s value for money, and volume two is even better.