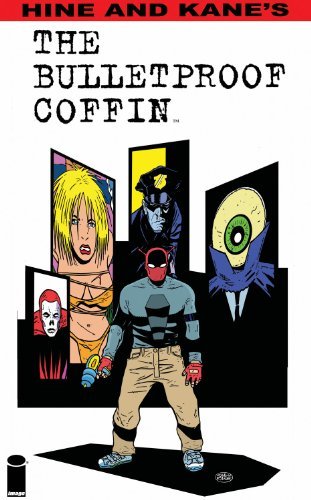 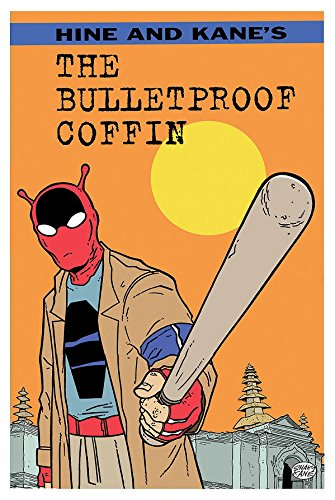 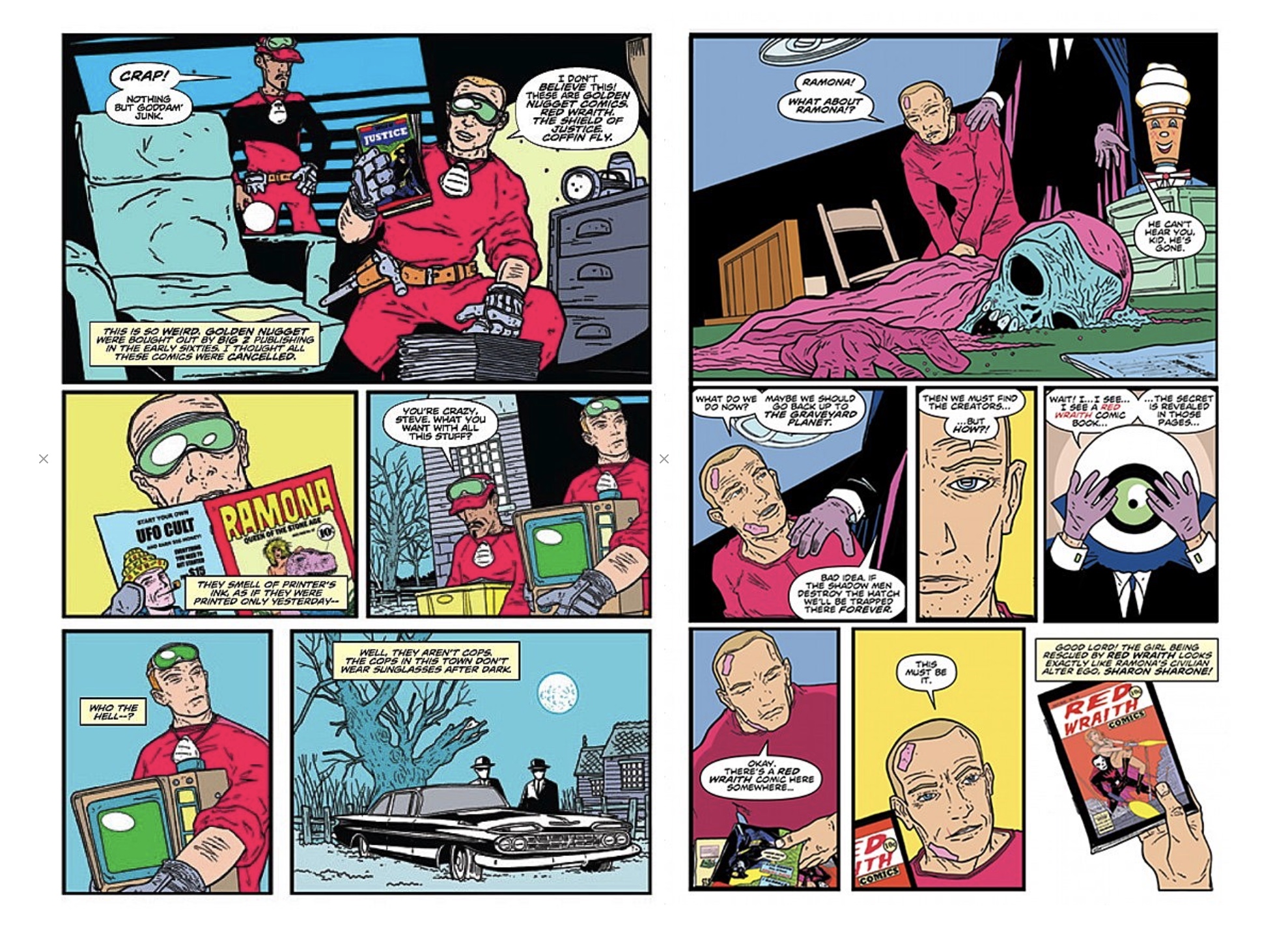 The Bulletproof Coffin is a lovingly irreverent homage to classic American comics, by Englishmen David Hine and Shaky Kane. It’s the story of a collector sucked into the pulp noir worlds of the legendary Golden Nugget comics.

An introduction provides the metafictional framing. ‘Hine and Kane’ were the Golden Nugget equivalents of Marvel’s Stan Lee and Jack Kirby, creating their top heroes: (as cover featured) Coffin Fly (foreground), The Red Wraith, Ramona – Queen of the Stone Age, Shield of Justice, and The Unforgiving Eye. Sadly, the monopolistic Big Two Comics bought and buried Golden Nugget and all its properties.

The homage reaches backward from Lee and Kirby’s 1960s superhero heyday, through the 1950s mystery/horror genre, to 1940s comics, even proto-superheroic pulp magazines. Mentions of the Marvel-lously nicknamed ‘Wild’ Bill Burroughs and ‘Frantic’ Franz Kafka, hint at the unsettling transformations of reality Hine and Kane apply to their four-colour sources.

Original Golden Nugget issues are sought after by collectors like Steve Newman, whose job as a garbage man provides privileged access to the homes of the deceased, one of which yeilds a trove of Nugget titles. Newman’s reading of the comics puts us into each title: ‘The Unforgiving Eye’ is a host of mystery stories, as well as their agent of justice. Coffin Fly takes Ditko’s ‘appropriate retribution’ and EC’s ‘graphic gore’ to new darker places. ‘The Shield of Justice’, channels (the other) Kane, and Finger’s similarly dark, (pre-camp) Batman, with the fresh corpse of a remorseful youth fished out the river in the decaying arms of his girlfriend.

Yet there’s something even stranger about the comics Newman has found as they seem to post-date the imprint’s demise. This mystery draws him back to the house they came from, where he also uncovers a Coffin Fly costume. When Neumann tries on the costume, there’s no going back. A door appears on his ceiling which takes him into the Fly’s titular Bulletproof Coffin vehicle, in a devastated future earth where Ramona – Queen of the Stone Age (secretly a time-travelling archaeologist) also appears. Back in the present, the rest of the now elderly heroes appear at Steve’s seeking his help to track down Hine and Kane, to stop them creating that terrible future. This will also save Ramona, with whom Steve is, of course, falling in love.

The story is credited to both (scripter) Hine and (artist) Kane. It’s clearly a labour of love, a nuanced pastiche, brilliantly updated and subverted. Kane channels Kirby (he has previous) for the retro pages, while the framing story is in Kane’s later style, which nods to Moebius or Geof Darrow‘s intricate draughtsmanship. He further adds a welcome touch of Charles Burns, in the diagrammatic backgrounds and assertively flat colours. There are countless wonderful details: rooms chock-a-block with collectibles; a Kirby style photo-collage; the serial misnaming of Newman to suggest shoddy sub-editing; captions and balloon pairings that mock-redundantly duplicate; even a fake torn-off corner that reveals, yes, the corner of the page below. Kane’s artfully stiff figures and compositions add to the evocation of inspired shoddiness. The further addition of meta-fictional text pieces between the episodes nods to Watchmen, to which this is a blackly comedic cousin.

Metafictional parodies of superheroes themselves go back to at least early Marvel, but Hine and Kane have delivered a compelling fresh twist. The ending offers satisfying resolution at both the plot and meta-fiction levels. If any Hollywood moguls are looking for a new superhero property this might be it.