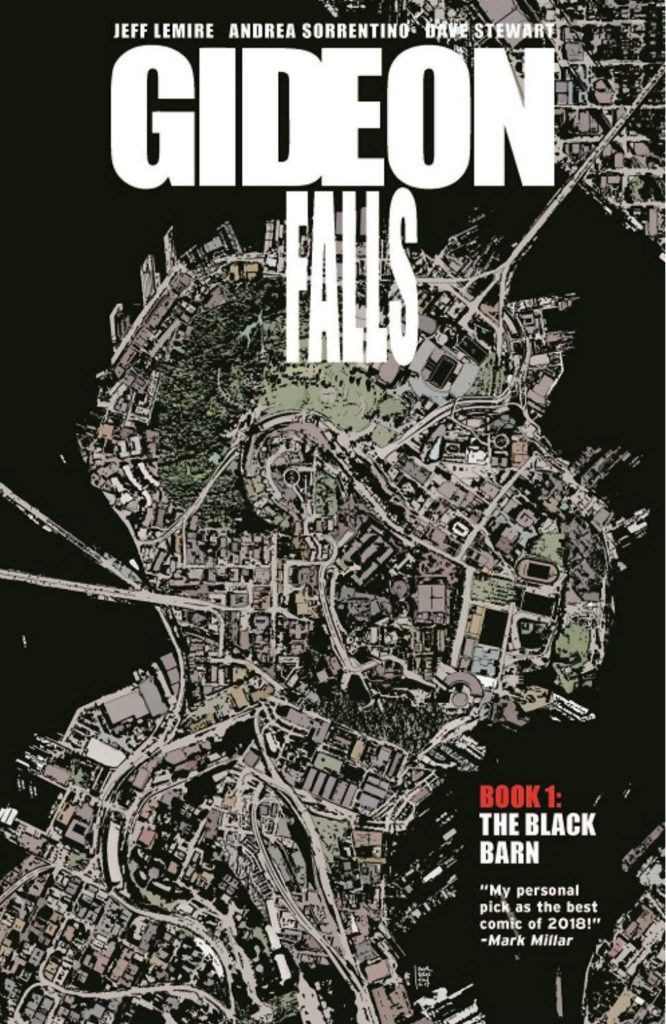 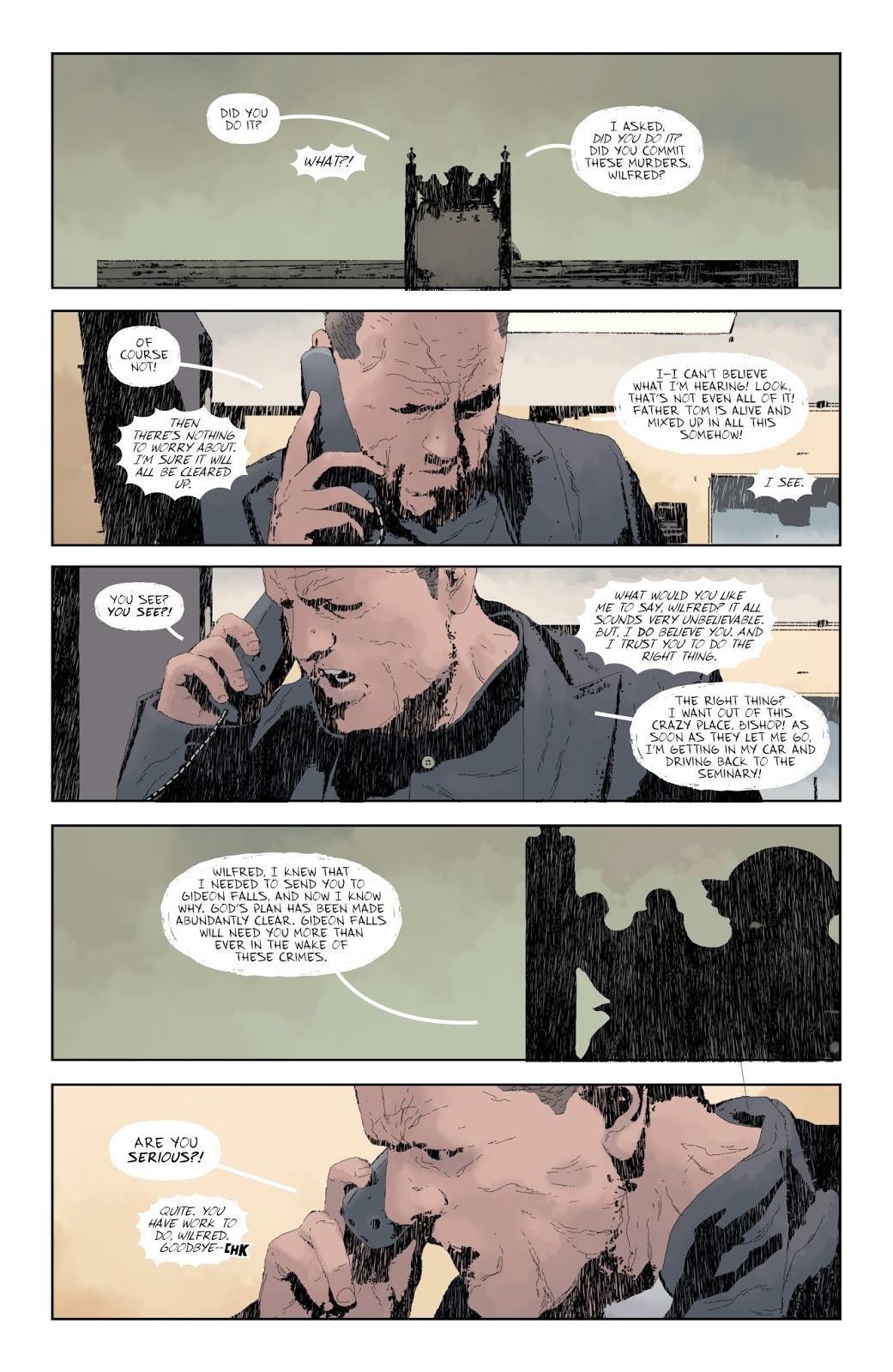 Jeff Lemire and Andrea Sorrentino’s collaboration on Green Arrow was a critical and commercial success providing an immediate desirability for Gideon Falls that either creator partnered with someone else might not supply.

Two men form the focus of The Black Barn’s opening chapter, both portrayed as if lost, but in different circumstances. Father Wilfred Quinn has been sent to Gideon Falls to replace Father Tom, who died mysteriously. He’s arrogant, confident and sarcastic, far from the conventional idea of a Catholic priest, yet he needs to atone for previous poor conduct, and we come to consider him a haunted figure. Norton sees a therapist, and spends his days sifting through rubbish searching for signs of a coming devastation that only he can sense, obsessively cataloguing shards he finds.

Norton might as well be a stand in for Sorrentino, whose approach to art is equally obsessive, detailed and then detailed some more. Some of that is down to digital texturing, but one spread features not only thirty skyscrapers rendered small size as a contrast to a large figure, but each has a full set of inked in windows. It’s an astounding effort on Sorrentino’s part also displayed on a series of variations on the cover, where a view of a location from above is outlined as if a human head. Even more notable is that head being recognisable as a cast member, Norton being cover featured. The wonder is that there are enough hours in Sorrentino’s day. Those illustrations further highlight him as an astounding conceptual artist when it comes to page design.

Lemire has an equally conceptual mind and given the sheer volume of comics he writes, a similar work ethic. He only very rarely appears to be spreading himself too thin, and that’s not an issue on Gideon Falls. A small town with a murky past and quirky, furtive inhabitants whose secrets are drawn out by the arrival of a stranger is a well worn fictional path setting a level of expectation, but Lemire greatly restricts the cast to prioritise the disorienting mood. Strange things are going on, but we’re not working our way through suspects along with the local Sheriff. Father Wilfred and his demons are interesting, but Norton’s greater demons are designed to induce a greater fascination. Is he unhinged and delusional or genuinely visionary?

Dave Stewart certainly is. His colour is spectacular, and essential to the prevailing mood, largely muted natural tones, but with occasional bursts of red never good news for anyone in the vicinity.

Once we’re comfortable with the small cast Lemire expands moderately, everyone slightly off-centre, as Father Wilfred learns how he’s viewed by some: “We’re fighting for the soul of Gideon Falls, and you Father are our newest soldier”. By then we’ve also learned of the manifesting terror that is the Black Barn, if not entirely what it represents. In sinister outlook, foreboding atmosphere and pacing Gideon Falls greatly resembles Robert Kirkman and Paul Azaceta’s Outcast, but Lemire and Sorrentino’s introduction is infinitely richer and more satisfying. Sorrentino and Stewart have already marked their cards, but they take a step up with the deliberately confusing final chapter that opens new doors and sets a new path with a redemptive theme.

The Black Barn is compelling and intelligent horror with a human core grappling with some massive questions. It’s a stunning series introduction, winner of an Eisner Award for Best New Series, making Original Sins an essential purchase.