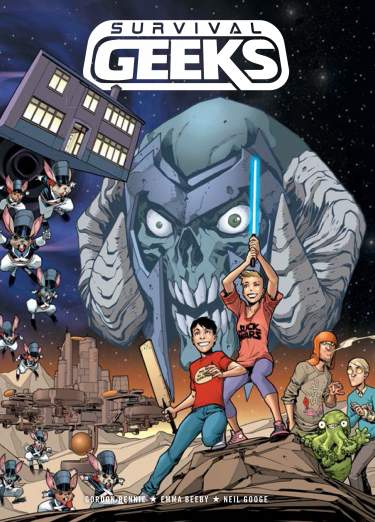 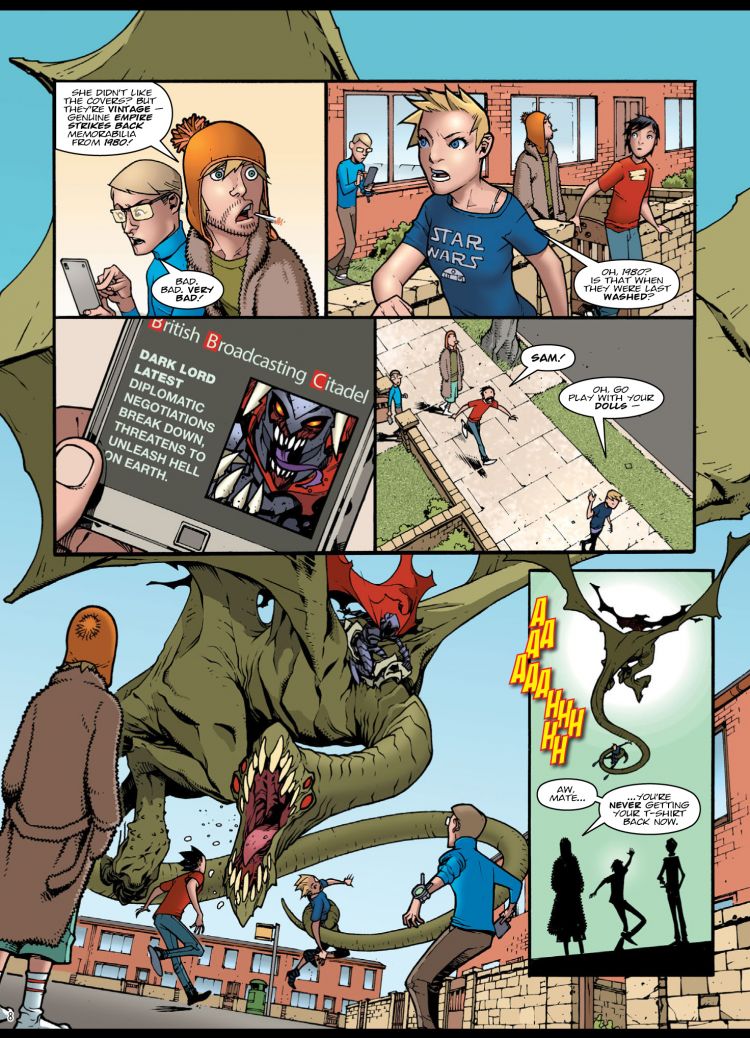 Everyone knows somebody who takes their favourite film franchise, TV or book series a little too seriously. It may be dressing up as favourite characters at comic cons, assailing film directors online for compromising the authenticity of source material, or taking pride in owning far too many t-shirts with obscure references the general population just don’t get. There’s a shared passion and enthusiasm in a community that celebrates your differences and shared interests. It’s this stoic commitment to fandom that the creative trio of Gordon Rennie, Emma Beeby and Neil Googe satirise lovingly with tongue-in-cheek in Survival Geeks.

When Sam wakes up in a strange room after a hook-up the night before, she’s horrified to find herself in the equivalent of Howard Holowitz’s bedroom (Big Bang Theory): wall-to-wall film posters and scattered collectibles from a lightsaber to superhero figurines. When she tries to sneak out through the front door, Sam finds herself staring into an inter-dimensional vortex. Now Sam is trapped in a dimension hopping house trying to get home with her would be paramour Simon, the crusty Rufus and brain box Clive; never knowing what they might encounter in the next dimension: a place where “diamonds rain from sapphire skies” or “awesome Barbarian Babes roam astride giant lizards”.

Writers Rennie and Beeby stuff Survival Geeks with every pop culture reference you can think of and another dozen you may not have heard of: Lord of the Rings, Dungeons & Dragons, Star Wars, video games, Dr Who and even 2000AD’s Judge Dredd himself. And that’s just the first story. The name of the game is pure rip-roaring fun playing on sci-fi tropes ala the good Doctor and Sliders. It’s very imaginative, nothing high-brow about it with all the fun coming from teasing geeks and their respective fandoms via a sitcom approach that changes the scenario with every chapter.

It has all the potential to come across as mean and scathing, but avoids that for a few reasons. Firstly, the creative trio are geeks themselves, clearly obvious by the sheer number of references made between them. Even if it isn’t mentioned, artist Googe ensures you’ll see it in some way within the story. His characters are relatively straightforward but have a likeable and relatable air, true to the script. For the purposes of the story they’re stereotypically portrayed for comedy affect, but it’s Googe’s astounding attention to environmental detail that delights. Every inch of every panel is crammed with geeky Easter eggs, far too many to count. There are a dozen references, from Cthulu to the cricket bat in Sean of the Dead, steampunk to Xena, Warrior Princess. Secondly, as geeks themselves, the creators know all too well what people can be like. Disparaging comments about a female Doctor (Who) and the sexism sadly still existent towards female fans and creators (thankfully diminishing) is not lost on Beeby, the first woman to ever write Judge Dredd. She takes it all in her stride with good humour, guided by the experienced paternal hand of mentor Rennie, clearly having as much fun as she is with references to Gerry Anderson, Blake’s 7 and Buck Rogers.

Survival Geeks is a light-hearted witty read with its affable banter and chucklesome ribs at a growing sub-culture embracing their own eccentricities. The challenge is finding the fandom not referenced in some way. That’ll keep you busy for a while.