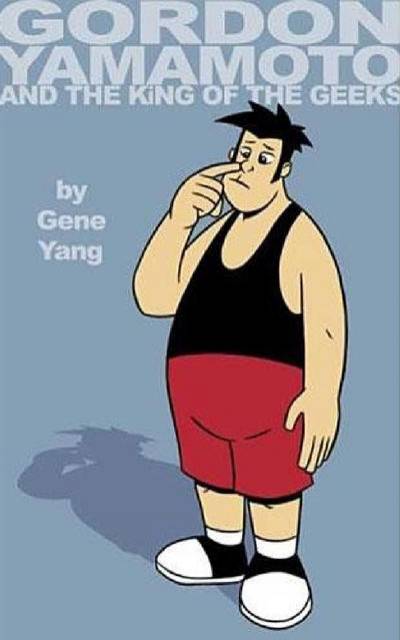 Every year Gordon Yamamoto and his mate Devon select the geekiest freshman they can locate as their target for persecution, gluing an old pair of underpants to their head as they’re crowned King of the Geeks. To them it’s the joke that never grows old. Gordon, though, has been experiencing strange dreams, all to do with objects in his nose, the weirdest of which is that he’s pregnant there. It turns out there’s a reason for this, and bizarre as it is, it connects him with that year’s annual geek, Miles, whose memories are downloaded into Gordon.

This has its emotional resonance, delivering some understanding, but the additional effect is to confuse. Gordon wants a way to remove the memories, and would prefer to be dumb again.

This was Gene Luen Yang’s first published work. He was then just calling himself Gene Yang, and his progress over three chapters here is remarkable. The art for the first chapter is well drawn, but there’s little variety in the viewpoints. By the third chapter the confidence of experience is showing with varied layouts, a sense of movement, and backgrounds.

The story as a whole is whimsical, and, at the start at least rather gives the impression of being conceived on a page by page basis. Yang’s sense of pacing and storytelling would improve as he created more comics, so this remains a curiosity rather than an essential early work. Gordon re-appears as a character in Loyola Chin and the San Peligran order, and that’s collected along with this in Animal Crackers.