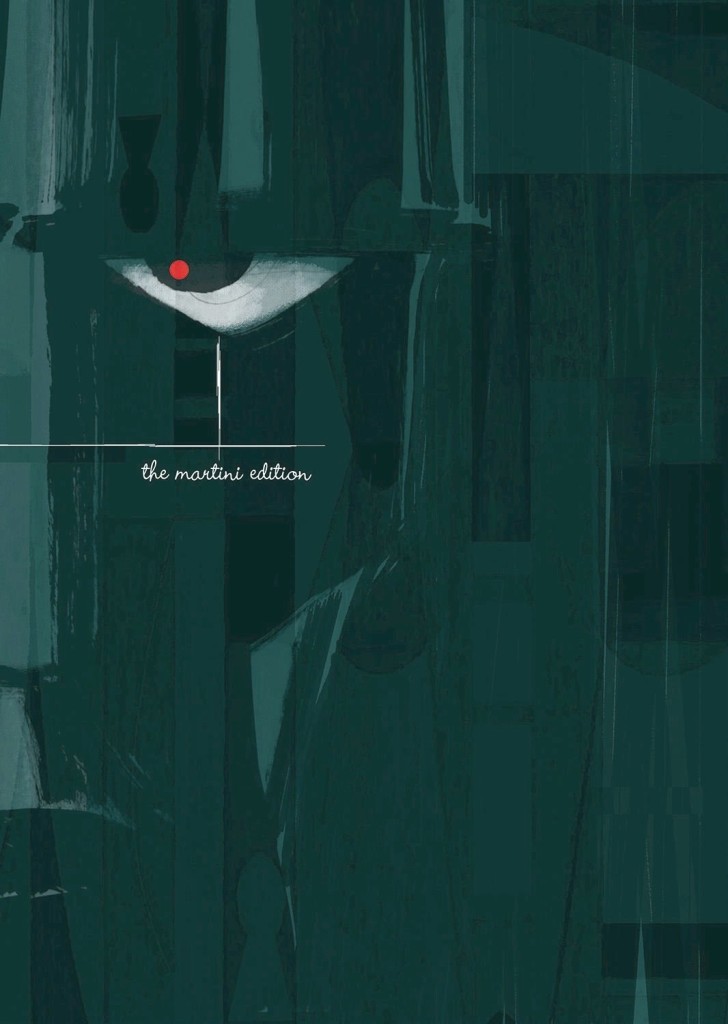 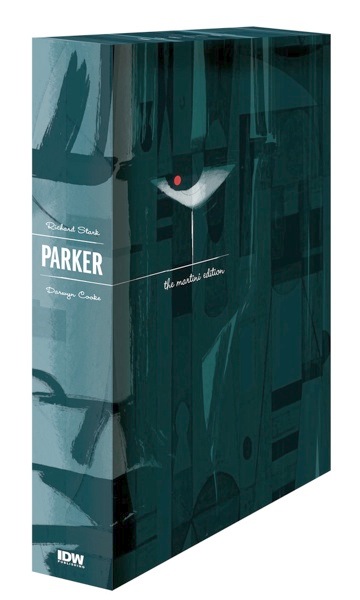 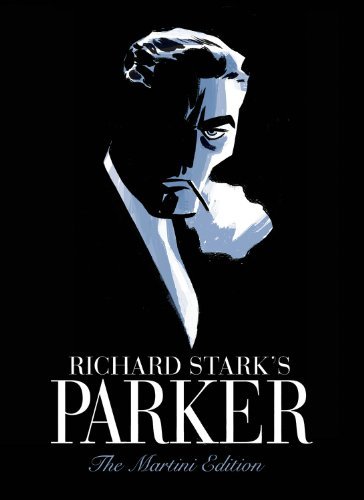 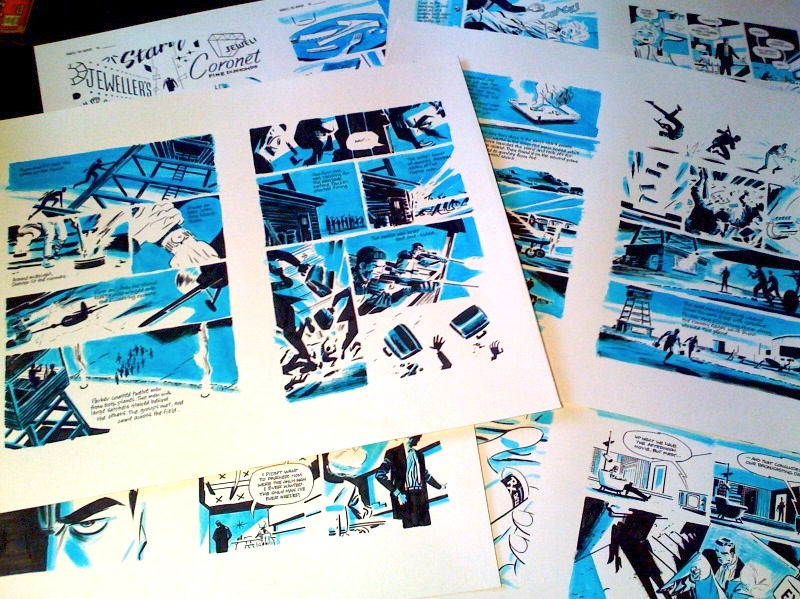 Richard Stark’s Parker: The Martini Edition is a large format slipcased hardcover, in the style of the now-standard ‘Absolute’ collections of critically-acclaimed/fan-favourite graphic novels. Beneath a black cover with a debossed graphic silhouette of Parker, this 360-page book presents Darwyn Cooke’s adaptations of two novels by Richard Stark: The Hunter, and The Outfit. It also includes ‘The Man with the Getaway Face’, the lead-in to the main events of The Outfit published separately and now here in its correct position as the beginning of that story, and ‘The 7eventh’, newly adapted for this collection. These strips are accompanied by lots of extras including an in-depth interview with Darwyn Cooke, series editor Scott Dunbier, and Cooke’s friend (and collaborator on DC’s Catwoman) Ed Brubaker conducted by Comics Reporter writer Tom Spurgeon; a ‘pictorial essay’ of Donald Westlake’s Parker; a sequence of drawings with commentary on all the film adaptions of Parker novels; and sketches, illustrations, design treatments, promotional and other images. There is also an excerpt from the novel Butcher’s Moon which features one of Donald Westlake’s favourite passages accompanied by a full-page illustration.

This is a superb compilation of Darwyn Cooke’s Parker adaptations to this point (The Score and Slayground were yet to come) into one flowing sequence of story, supporting imagery and commentary that showcases the skill that went into creating this series of books. The design is beautifully executed with lots of playfully period-appropriate typography in layouts like men’s magazines of the 1960s. One particularly illuminating extra shows how the extra accent colour used in each story as both a narrative and design element isn’t added later, but is a gutsy part of the original art, expertly applied with a brush and/or markers over the black line.

The bonus story for this collection, ‘The 7eventh’, is a stylistically brilliant vignette which takes a whole novel by Westlake/Stark and boils it down to the final chapter. This works superbly well despite a confusing prologue: the type at the bottom of pages 322 & 323 unfortunately says ‘The Hunter’, when it should say ‘The Seventh’ like pages 326 to 333. It takes a moment to realise this is just a typo and not a flashback to the earlier story, and it’s a shame nobody caught it. ‘The 7eventh’ is followed by ‘Stark’s Hollywood’, a portfolio of two-colour images which are essentially Darwyn Cooke redrawing stills from all the movies which have either adapted Parker books or other writing by Donald Westlake to the screen, or used them as inspiration for new films. He adds notes to the illustrations, reflecting on how well these films worked and which are his favourites.

If you don’t have the first two adaptations The Hunter and The Outfit already you should forget about them and buy this book instead. If you have them already you should still forget about them and buy this book, because the way they are revised and shown here is utterly superior to their original appearance. The Martini Edition is the finest presentation of this material possible. It’s the best way to appreciate what was a true labour of love for Darwyn Cooke, with his fervour and commitment to Westlake’s books shining through every page of this oversized hardcover. Crime comics don’t get any better. If you don’t care for the subject matter, the sheer verve, style and expert storytelling of this collection will still bowl you over. Masterful.