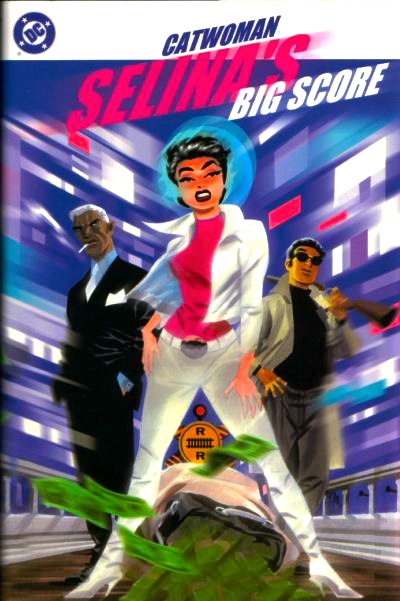 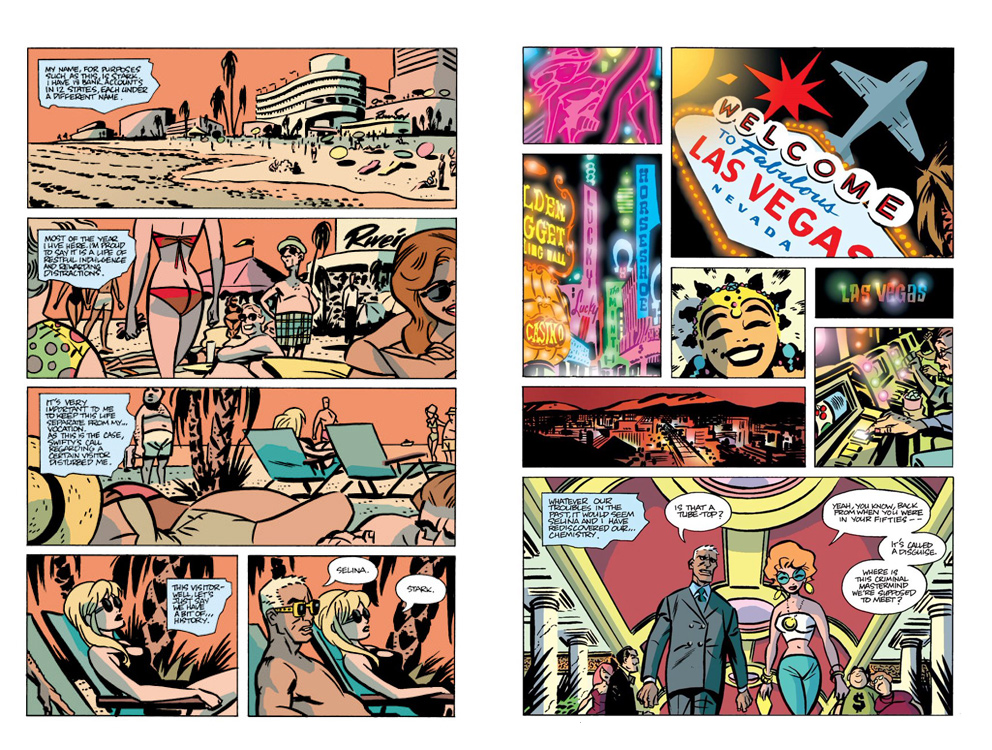 Selina’s Big Score is an original graphic novel that acts as an introduction to Darwyn Cooke’s version of Catwoman, who he rebooted in 2002. Cooke began by having her fake her death and vanish from regular comics continuity. The four-part ‘Trail of The Catwoman’ gave readers a first look at this new version as she was dug out of hiding by Slam Bradley, a private investigator working in Gotham. The story continues in Selina’s Big Score, which explains the ‘death’ of the old Catwoman and establishes her new persona. Goodbye to the hypersexualised superhero pin-up and hello to a tough but glamorous femme fatale on the wrong side of the law.

With no costume and nothing to connect her to her former life, Selina Kyle has made a fresh start but she’s flat broke. Needing major cash to set up in Gotham again, she learns of a train loaded with dirty money, to be sent to Canada for a huge drug deal. She builds a small team of professionals and they go after it. There’s Chantel, the disaffected girlfriend of a mob boss; Swifty, the old ex-con who runs a pawn shop; Stark, a diamond-hard career criminal who is also Selina’s ex-boyfriend; and Jeff, a young hot-shot daredevil who’s good with machines. It all reads like a comics version of a Quentin Tarantino movie as Cooke strings together pieces of every old crime caper movie he’s ever liked, such as The Killing, Point Blank or The Asphalt Jungle into one big homage to Heists Gone Wrong. It’s also a love letter to the Parker books by Richard Stark, with Cooke not only naming Selina’s former love interest Stark but giving him Parker’s methods and Lee Marvin’s face, in a rehearsal for the adaptations that he’d work on a few years later.

From the setup, the extensive prep for the heist and the execution, to the unforeseen slip-ups that wreck their perfect getaway, it’s all straight-up generic crime noir, and any fan of the genre will easily see the twists coming as soon as they start reading. But while it’s predictable from start to finish it’s very well done, fast-moving and enjoyable action. It’s superbly drawn by Cooke with dynamic speedy brushwork reminiscent of 1950s and 1960s artists such as Frank Robbins or Alex Toth. The storytelling is hard-edged and staccato, using lots of pattern and big splashes of black against hot and cool hues supplied by master colourist Matthew Hollingsworth, who adds intensity and muscle to the art with some very well chosen, vivid and surprising colour combos. All in all, it’s an excellent revamp for a character who would go on from here to gain a new readership in tightly plotted, stylish crime dramas courtesy of Cooke and writer Ed Brubaker.

An added extra in this hardcover edition are pin-ups by a great selection of artists, all drawing Catwoman in the new costume which Cooke himself doesn’t use in this story: Mike Allred, Shane Glines, Jaime Hernandez, Adam Hughes, Mike Mignola, Daniel Torres, Kevin Nowlan and the legendary Jim Steranko.

Selina’s Big Score has been reprinted in the collection Batman: Ego and Other Tails, and the ‘Trail of The Catwoman’ intro story arc can be found in Catwoman: The Dark End of the Street, later re-titled Trail of the Catwoman.