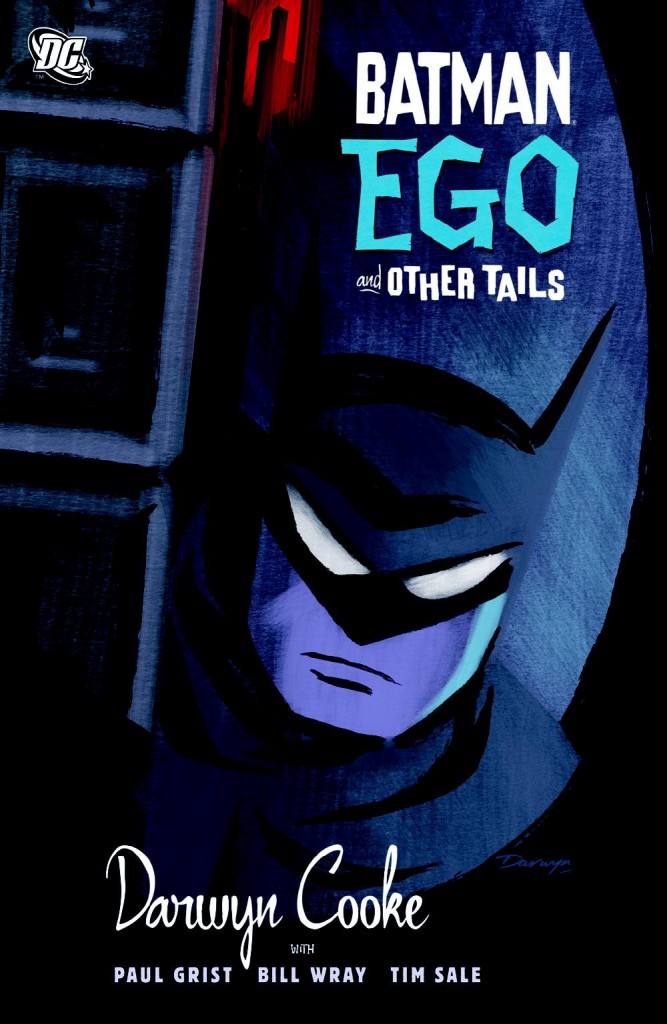 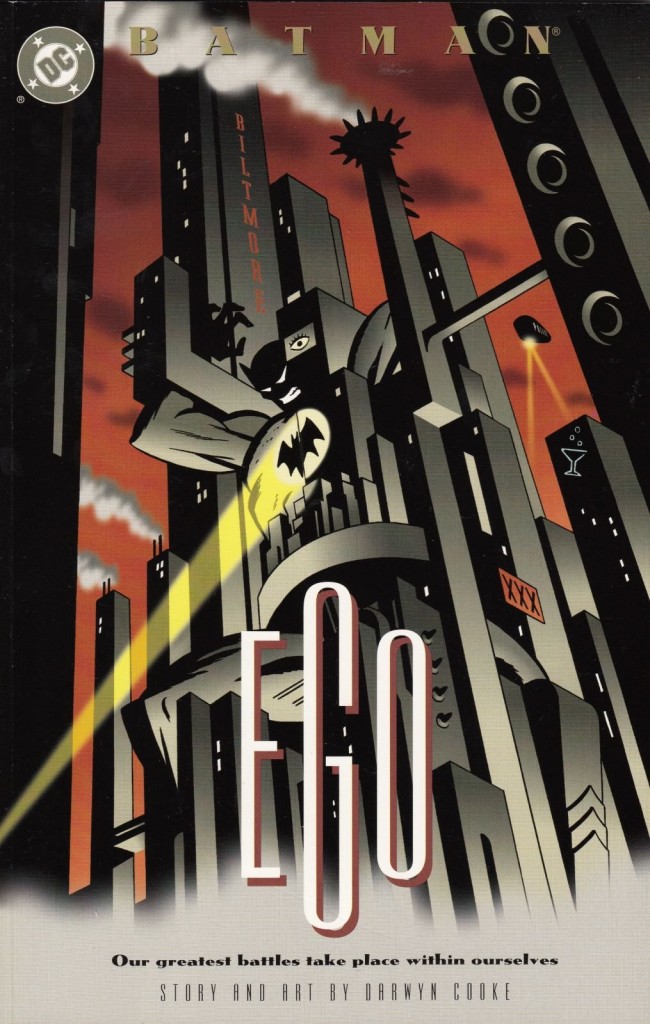 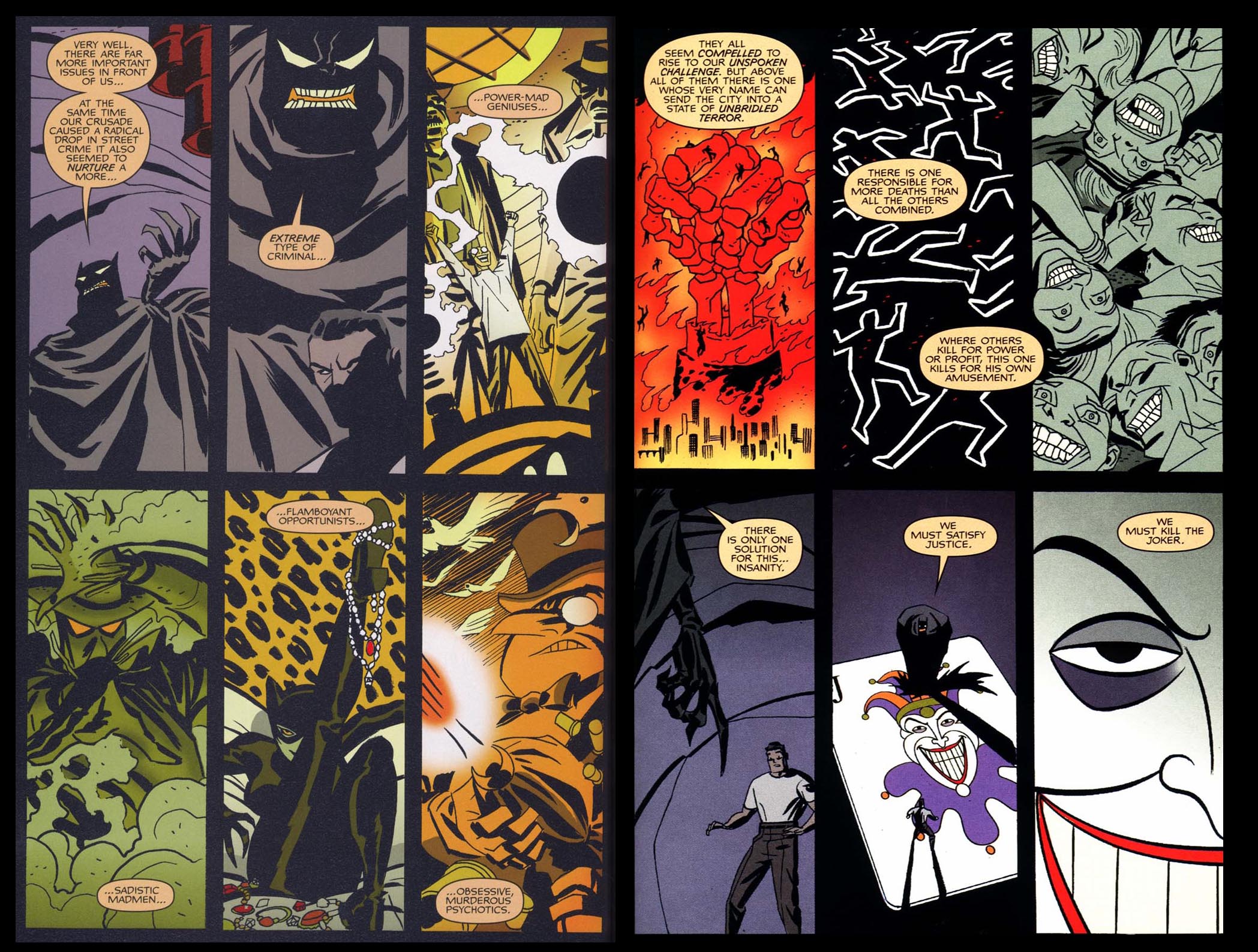 This hardcover collects almost all of Darwyn Cooke’s Batman-related stories in one volume, featuring the two graphic novels Batman: Ego and Catwoman: Selina’s Big Score. It also includes short stories either written and/or drawn by Cooke working with Paul Grist, Tim Sale and Bill Wray, from Batman: Black & White and Solo. There is one significant omission from this collection, however: ‘Trail of The Catwoman’, which started Cooke’s Catwoman reboot/revival. While available in Catwoman volume 1 under that title, it’s odd to include Selina’s Big Score yet omit this introduction to the all-new Selina Kyle as she’s dug out of hiding by Slam Bradley, a private investigator working in Gotham.

Darwyn Cooke’s art style has the stripped-down angularity of the Batman Animated TV series on which he worked as a designer and occasional board artist, but with more of a noirish edge, harking back to the lush, dynamic brushwork of artists such as Milton Caniff, or Frank Robbins. His writing too has something of a period feel to it and all stories in this volume inhabit a world where no matter what year it is, it’s somehow always 1968.

In Batman: Ego, Bruce Wayne is estranged from his own Batman persona as he agonises about the limitations of his moral code and if he should give up crime-fighting – or take it to its ultimate conclusion. It’s a great, if well-worn, premise for an exploration of Batman’s history and his personality, and Cooke designs gorgeous visuals as the Bat-costume takes on a life of its own in a schizoid confrontation with its former owner. However, after establishing the dilemma and exploring some of the fallout, the conclusion arrives suddenly and isn’t as satisfying as it promised to be.

‘Here Be Monsters’ is written by Paul Grist and drawn by Cooke. Trying to prevent a villain called Madame X from spiking the Gotham water supply, Batman is hit with a dose of her psychotropic chemicals, sending him on a journey into madness. This is a beautifully handled exercise in black, white and grey tones. ‘The Monument’, written by Cooke and drawn by Bill Wray, is less stylistically successful. Gotham City erects a large statue of Batman but it’s a magnet for trouble.

The straightforward crime piece ‘Selina’s Big Score’ is the longest story. Batman appears only in one panel of this Ocean’s Eleven-style heist featuring Catwoman, out of costume as Selina Kyle. Cooke has Selina teaming up with a Lee Marvin-esque partner actually called Stark to pull off the titular ‘big score’ and steal $24 million from the Mob. The characters are all juicy stereotypes and Cooke’s artwork spectacularly evokes the feel of heist-gone-wrong movies like Point Blank and The Killers.

‘Date Knight’, written by Cooke and drawn by Tim Sale, has Batman pursuing Catwoman, and the variety of contacts and settings are about as close as they can come to going on a date. It’s a cute portrayal of the romantic tension between them.

‘Deja Vu’ is written and drawn by Darwyn Cooke, a re-imagining of a 1970s classic Batman tale by Steve Englehart and Sal Amendola, ‘Night of the Stalker’. After witnessing a replay of the crime that orphaned him and that lead to his creation, Batman hunts down the criminals responsible. Lots of atmosphere and strong visuals make this a superb end to this volume. This hardcover also contains an intro by Cooke plus other artwork including two covers for Batman: Gotham Adventures and a “Solo dreamgirl pinup”. In 2019 a deluxe edition with eighty extra pages was issued.