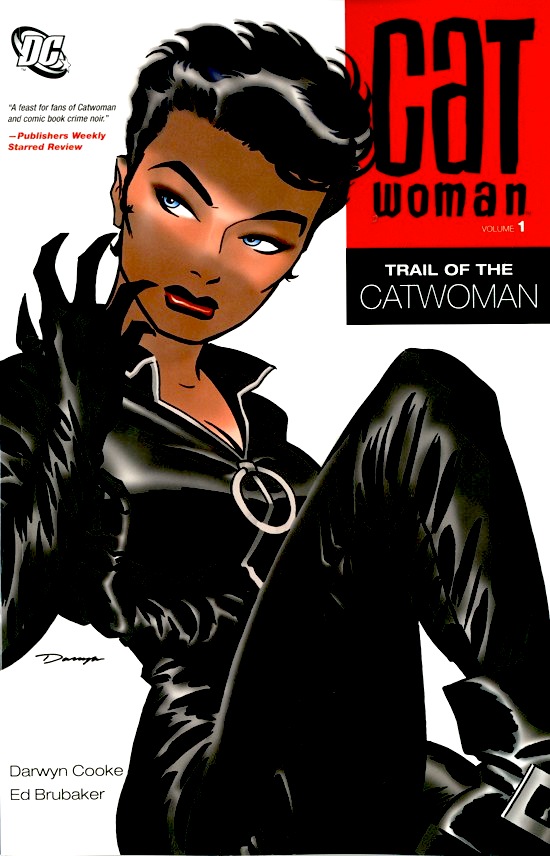 This super-sized volume features Catwoman as revamped by Darwyn Cooke in 2002. The stories reprinted introduce a Selina Kyle slightly reframed from the version introduced in Batman: Year One, now a strong and fiercely independent woman who is a glamorous anti-hero. There are references to events and characters from the previous 1990s series but this introduction to the all-new Catwoman is carefully written to weave them in so that new readers don’t need to know anything about stories that took place before.

Selina’s Big Score was originally published as a separate graphic novel, and is written and drawn by Darwyn Cooke in dynamic, contrasty light and dark images that evoke the retro flavour of 1950s and 1960s artists such as Frank Robbins or Alex Toth. It introduces a Selina Kyle who has been in hiding for months after faking her death and vanishing from Gotham. With no costume and nothing to connect her to her former life, she has sucessfully made a fresh start, but she’s broke. Needing money to set up in Gotham again, she learns of a train loaded with millions of dollars from organised crime, to be sent to Canada for a huge drug deal. She uses her contacts to form a small team of professional criminals, and they go after the loot in a tightly planned heist that inevitably ends up unravelling.

‘Trail of The Catwoman’, drawn by Cooke and written by Ed Brubaker, fills in a little more of the backstory hinted at in Selina’s Big Score. Slam Bradley, a private investigator working in Gotham, hunts for clues to her disappearance and concludes that she’s still alive.

After that, a succession of stories establish this new Robin Hood-styled character with complicated ties to Batman, operating by her own moral code on the edges of legality. The first story arc sees the return of Selina’s friend Holly who becomes her sidekick as the Catwoman intervenes on behalf of sex workers who are being murdered by a serial killer. The superhero elements are played for weirdness in these stories, with the emphasis on gritty crime-noir with lots of tension and atmosphere. Cameron Stewart takes over on art for the second story involving a drug dealer who uses children to transport drugs across the border. After Catwoman becomes involved, crooked cops frame Holly for murder, and Catwoman must clear her name by bringing the real culprits to justice.

This is an excellent revamp for a key player in the Batman universe, bringing a welcome return of twisty plots, appealing characters and action-packed stories told with flair. Like most crime fiction it’s not really child-friendly material. Trail of the Catwoman is designed to be accessible to new readers, so if you love Catwoman but never knew where to begin, or if you just like noir stories, this is the ideal place to start. The stories in this big volume were previously available in two smaller collections: The Dark End of the Street and Crooked Little Town, and the series continues with No Easy Way Down.