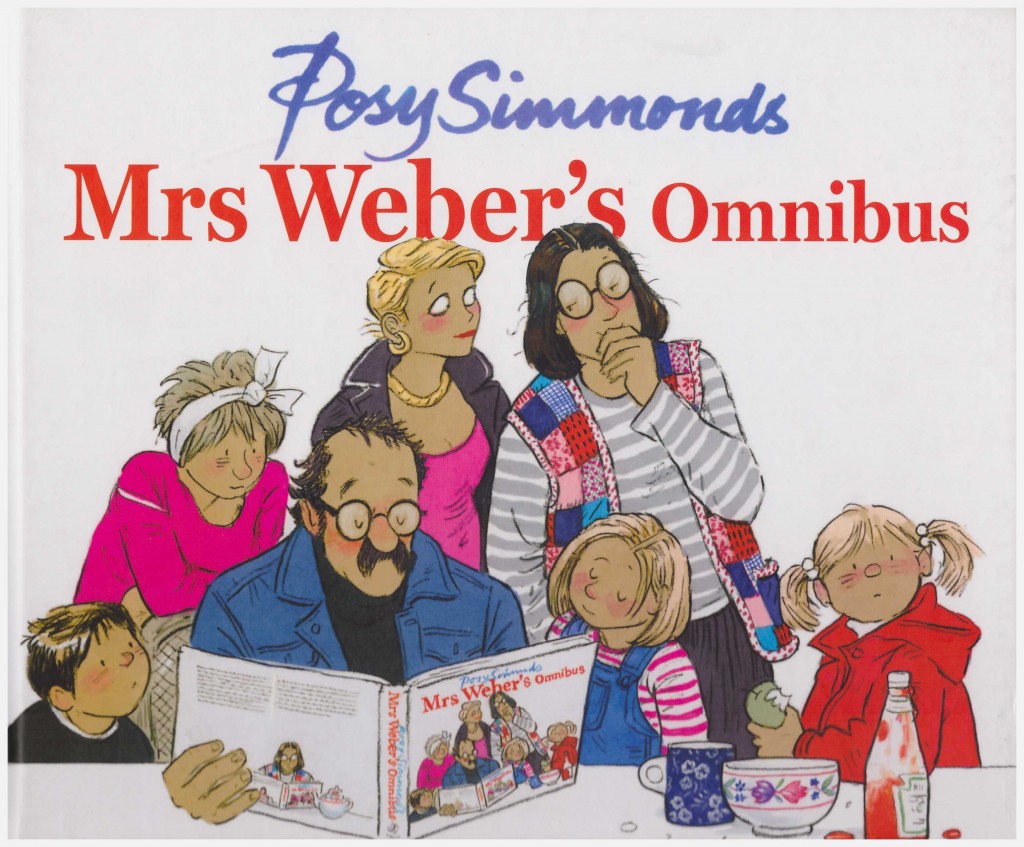 Starting in 1977, Posy Simmonds’ weekly newspaper strip for the Guardian ran every Monday for over twelve years before the serialisation of Gemma Bovery, then morphed into Literary Life, from where Simmonds progressed to Tamara Drewe. Generally titled Posy, the original strip rapidly developed from a nicely drawn parody of girls’ adventure strips into a pomposity and pretentiousness-pricking satire of the English middle classes.

The primary focus is on the Webers. Wendy has devoted herself to raising a family, but is bright, articulate and occasionally aware her choices have prevented her flourishing, despite continuing to work from home. George is a polytechnic lecturer, Senior Lecturer, no less, in Liberal Studies. Their six children deliver all the problems associated with their assorted ages, the teenage Belinda the most frequently seen. Other characters drop in and out of the proceedings, primarily former school friends of Wendy and their families. Serial wick-dipper Stanhope Wright runs an advertising agency, while Edmund Heep is an unreconstructed 1970s salesman, drunken, lecherous and with no off button. His son Julian is as snotty as they come, except in the presence of girls, when he’s a shambling wreck.

It’s extremely pleasant to note that far from dating, the sugar-coated commentary Simmonds provided in the 1980s is equally relevant today, despite trappings such as polytechnics having joined the dodo and the mastodon. Frequent jokes include structuralist George bending over backwards to contextualise mundane interactions in complex language, those poor folk and all the problems they have with their second homes, wooly liberal principles being completely useless in dealing with a practical situation, and Jocasta Wright as the only woman to whom her father’s hypocrisy is transparent, yet unable to prevent her own attraction to father figures.

Years of honing her craft via cartoons and a previous strip, Bear, meant that Simmonds was an accomplished cartoonist when this material was created. Her elegantly simple style adapts to the concerns of the strip at hand, and she often surprises by throwing in some classical linework. The sheer volume of material also displays how inventive Simmonds was when laying out her strips. Constricted only by the rectangular area the strip occupied in the newspaper she’d divide that as she saw fit. This is most frequently as three tiers, but occasionally a single illustration or a page divided in two diagonally, or in four contrasting the two elements of a phone conversation.

In almost 500 pages this omnibus gathers the previously published collections Mrs Weber’s Diary, Pick of Posy, Very Posy, Pure Posy and Mustn’t Grumble, all out of print for over 20 years. It also includes True Love, which features the Posy cast, but was original material. There’s a case to be made for this 1981 work being Britain’s first graphic novel.

While appreciating the format and that the strips are once again available, there are a couple of problems with the omnibus, firstly that it repeats the haphazard presentation of the original collections. Was there really a necessity to re-present the material as originally gathered? There are sequences when four consecutive strips were produced in four different years, or strips on facing pages having five years between them. Could someone not have made a little effort to arrange the strips in chronological order? Secondly, it claims to be a complete collection, but it isn’t. Strips were omitted from the original volumes, and aren’t restored here, but this may be down to Simmonds herself, who’s referred to “weeding out the duds”.

Sadly this may have limited appeal beyond the UK where there’s an instinctive understanding of the subjects.