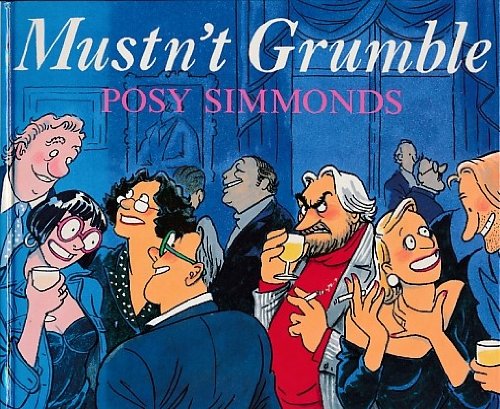 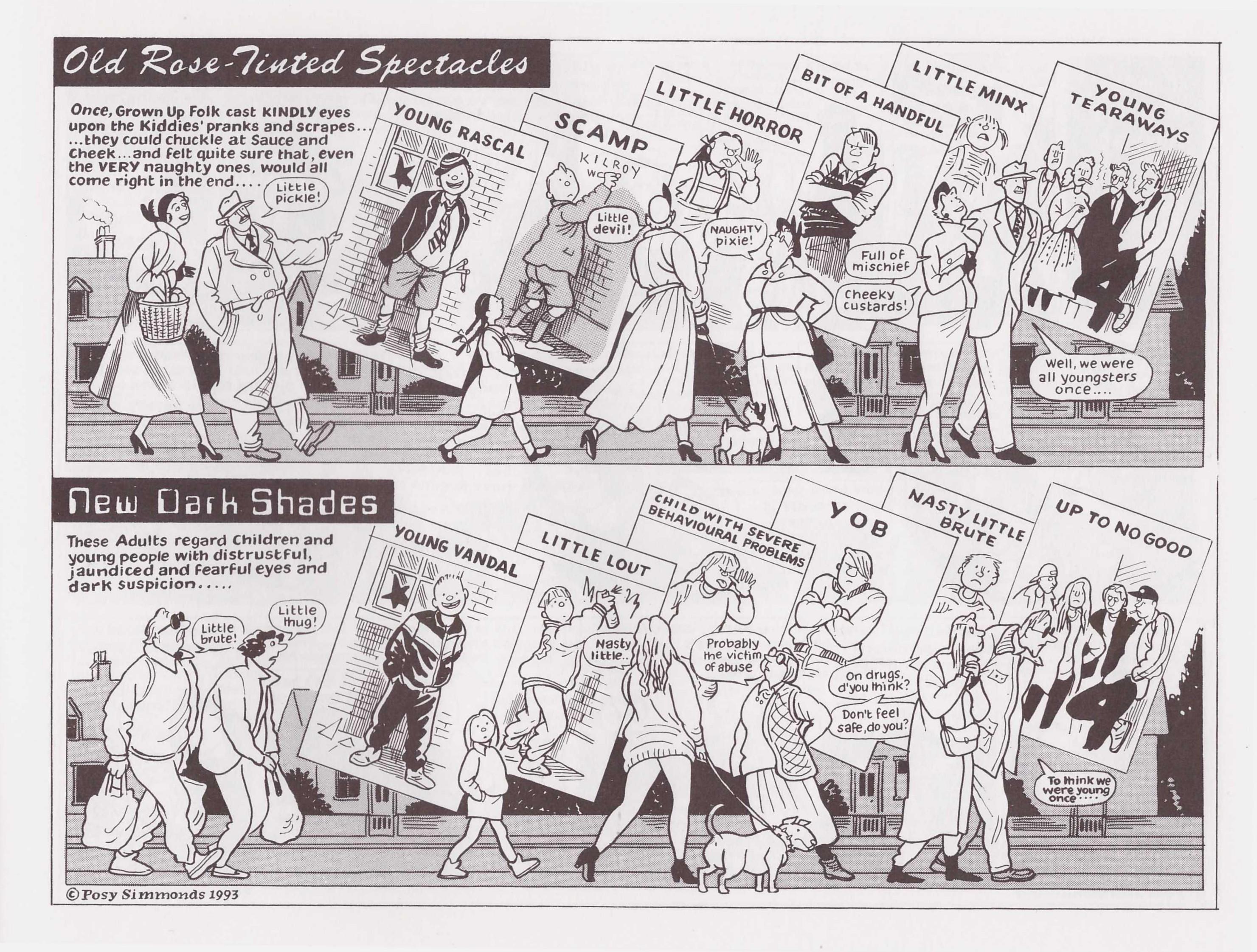 This is the final collection of Posy Simmonds’ Guardian newspaper strips in the format introduced in 1977, and it also incorporates material created for other publications. The content dates from the late 1980s and early 1990s, and the characters that sustained her strip through the previous decade are rarely to be seen.

The essential topic, though, remains the pricking of the pretentiousness and pomposities of the chattering classes, zoning in on foibles, eccentricities and hypocrisy. The Weber family and their friends are largely sidelined in favour of the observations of self-proclaimed ‘literary’ author J. D. Crouch. Presaging similar characters from her later Literary Life, and Tamara Drewe, the perpetually vain and grumpy Crouch was first introduced in Pure Posy and represents the evolving face of the middle classes at the time. A financial dip affected many, and the old stiff upper lip culture was gradually being phased out.

Simmonds adapts her approach to primarily illustrated text for a series of monthly pieces for the Spectator during 1988 and 1989. Each features the person of the month along with observations regarding their lives. Newer trades are featured, with Simmonds well ahead of the curve with the closing strip, spotlighting the new breed of stock trader, and there are some compact observational masterpieces. In one an obviously fed-up child on a horse can’t live up to her frustrated mother’s vicarious expectations. A patronising, self-centred dressing down is followed by a small ad selling the horse. A tiny series of headshots ends the page with a scowling mother, delighted child and even more delighted father, now able to spend more time at the golf course.

It’s to be presumed that the concept of bounden duties has remained imprinted since Simmonds’ school days, and she gives it a late 20th century updating over six strips encompassing a whimsical mastery of formats. One is a complete newspaper strip and gag page parodying those found in tabloid newspapers, another three tiers of the same three rooms, and the opener a particularly oleaginous example of the new gentry explaining the economics of his estate. Subtitles reveal the truth.

As with earlier collections, it’s remarkable how timeless Simmonds’ commentary is. It was produced to the most exacting standards when first created, and the beauty of the art is still a delight, as is the lettering. In an interview with Paul Gravett, Simmonds archly recounts meeting some American strip cartoonists who enquired about her inker and other members of her team!

Musn’t Grumble follows the production format of Simmonds’ other strip collections, being published in a landscape format, and the entire content is also available as part of the bulky Mrs Weber’s Omnibus, collecting all of her strip that Simmonds deemed fit for reprinting.