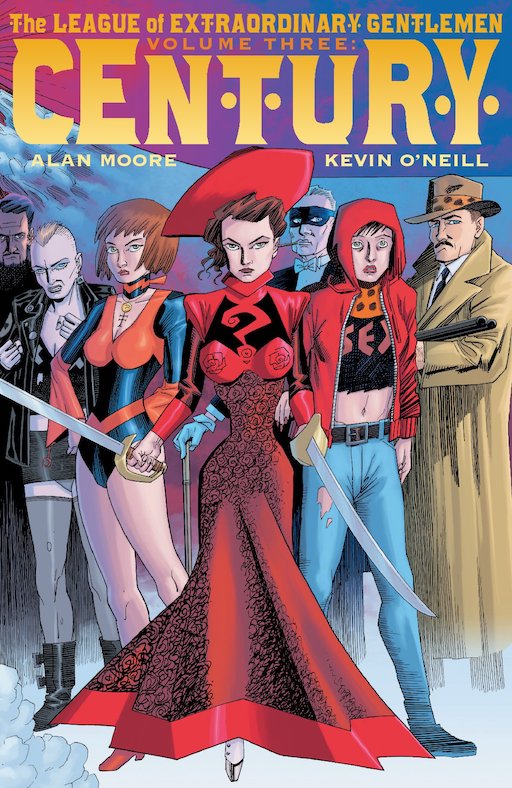 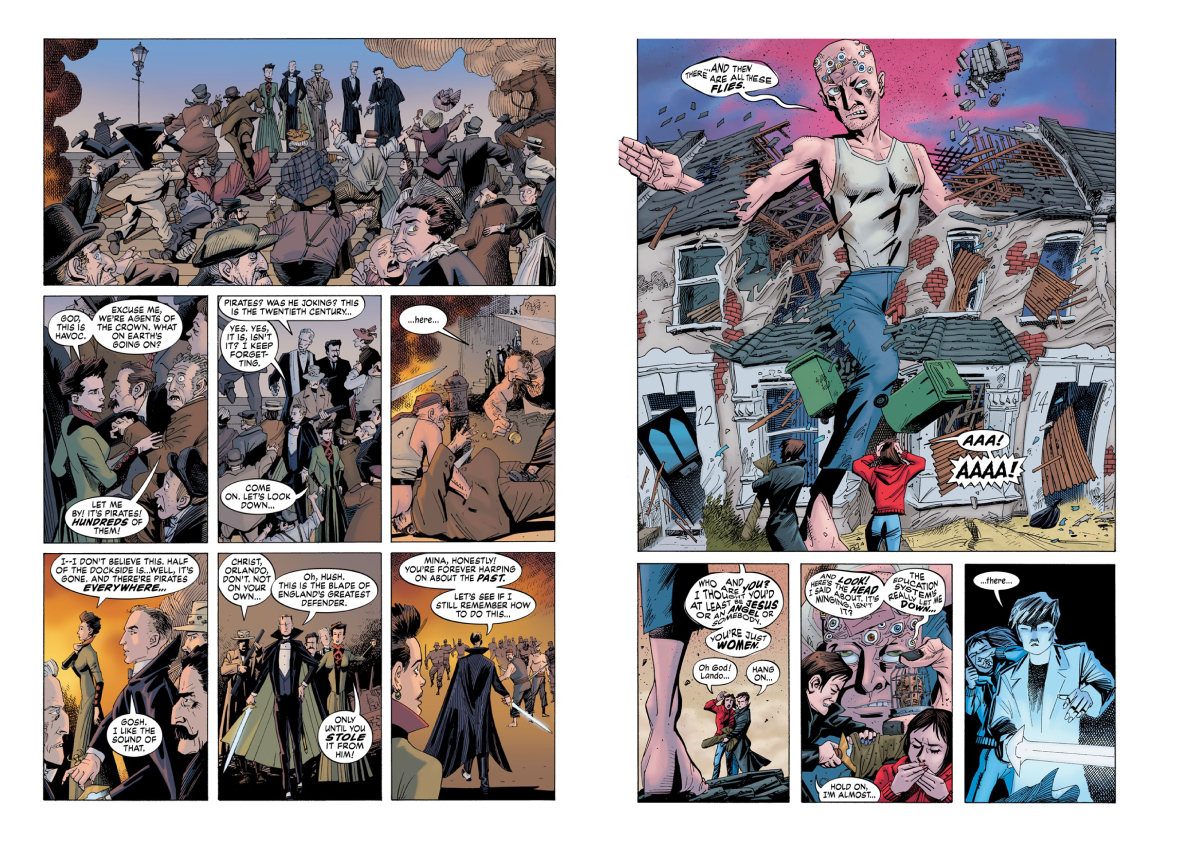 In The League of Extraordinary Gentlemen, Alan Moore and artist collaborator Kevin O’Neill created a unified world involving characters from any era and genre of fiction.

The initial concept was a team of characters from Victorian literature, more specifically, popular, fantastic or serialised fiction, which were the progenitors of genre comics. The 1898 iteration included Mr Hyde, The Invisible Man, and Captain Nemo. Next release, The Black Dossier, considered by Moore as a sourcebook to the series, extended the scope of the intertextual world-building through time, around the world, and into alternate reality the Blazing World. The dossier’s contents were worked into a frame story set in 1958, with League survivors Mina Murray (from Dracula) and Allan Quatermain in a quest and chase through a post-war alternative Britain.

Moore has spoken of a change of publisher freeing him “from the conventions of boys’ adventure comics”, and that’s evident in Century. The emphasis is less on the rousing adventure of the original cover blurb, than on a travelogue of a world seen through it’s fictional representations. Moore would continue this approach with the sea-faring Nemo trilogy, but Century focusses on Moore and O’Neill’s native Britain. Originally published as three self-contained novellas set in 1910, 1969, and the then present of 2009, gathered into a single volume it forms a composite novel spanning the Century of the title.

Part of the brilliance of Moore’s execution is in extending the characters within their fictional realities. This means that in 1910, the mortal Captain Nemo is on his death bed, whereas Mina and Allan are now credibly (vampire blood/Flame of Life) immortal like Virginia Woolf’s transexual warrior Orlando. This enables these three to continue as protagonists over this century long adventure, leading us through the fully realised inter-textual world glimpsed in each year.

Century 1910 opens suitably with ‘Murray Group’ member, and occult detective, Thomas Carnacki amidst a dream of occultist Oliver Haddo and acolytes plotting a ‘moon child’ triggering “a strange and terrible new aeon.” If that seems comfortably within the realm of “boys’ adventures comics”, a parallel narrative of Nemo’s daughter Janni shunning his legacy is the most striking departure. Extending the range of Moore’s literary plundering, this sequence channels Bertolt Brecht’s Threepenny Opera and its song Pirate Jenny. ’Sung’ in rhyming couplets (a device used at times in the other novellas) it’s a challenging read, but pays off powerfully, and triggers the spinoff Nemo trilogy.

In Century 1969, “the Haddo business” resurfaces, prompting Mina, Allan, and Orlando to seek answers in counter-cultural epicentre ‘Swinging London’. Moore’s treatment draws on fictional, cinematic, and factual events, of that bittersweet final year of the 1960s. The result is both a page-turning read, and a dazzling poetic distillation of the period, in its extremes of utopian optimism and malevolent opportunism.

Century 2009 shows the cast each in their own way facing the after-effects of the 1960s, as manifest in Century 1969. Having lost leader Mina, Orlando has to strike an unlikely deal, and reform the team to divert the now impending Moon-Child apocalypse. The focus on supernatural fiction continues, boldly and astutely re-appropriating the period’s most famous magical franchise. It’s deftly done, weaving in numerous elements, but primarily engaging with the idea of the boy hero secretly groomed for a role he doesn’t understand, and left violated and vengeful.

Earlier League volumes provide context, and a more accessible entry point, but Century satisfies as a self-contained graphic novel, the sum informing the parts. It’s a rich, demanding, but ultimately rewarding, read. Kevin O’Neill, with colourist Ben Dimagliw, brilliantly realise Moore’s visions, with pages rivalling anything in the medium. The series concludes with The Tempest. 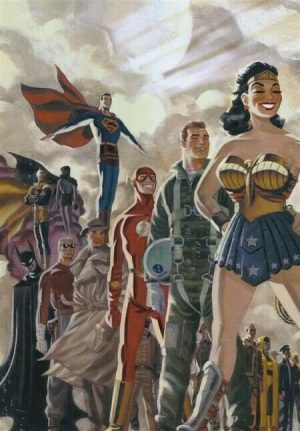