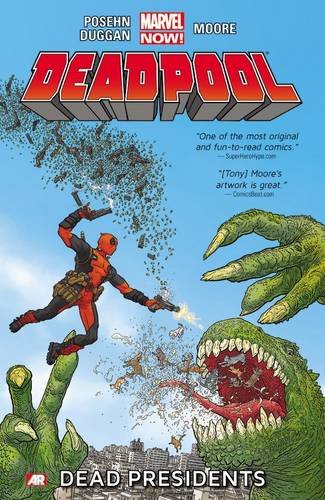 Odd title, Dead Presidents, isn’t it? So who does S.H.I.E.L.D. call to take on the mystically reincarnated former incumbents of the Oval Office if they want to avoid front page pictures of Captain America decapitating Harry Truman with his shield? Yup, Deadpool’s your man. How could it possibly go wrong?

Kicking off a new Deadpool series, writers Gerry Duggan and Brian Posehn have a ball extrapolating the proclivities of assorted presidents as passed down through the history books, or alternatively every piece of trivia about them that’s ever come up in a pub quiz. It’s perhaps significant that Martin Van Buren, Chester A. Arthur and Rutherford B. Hayes only feature illustrated once and labelled, while Abraham Lincoln and George Washington have major roles. Their fundamental point is they don’t like what’s the USA has become, so it’s time to start again. The process that revived them also ensured they’re very difficult to return to the grave, and over forty of them have already lain there. The writers are equally innovative when it comes to testing Deadpool’s rapid healing factor in gruesome fashion. The elephant sequence and it’s aftermath are definitely not for the weak of stomach. Or any designation below cast iron, actually. Their version of Deadpool isn’t quite as motormouthed as some previous incarnations, which is a relief, as is the reduced inclination to break the fourth wall. This isn’t to say he’s short on quips, with which Duggan and Posehn are rather good.

So’s Tony Moore. His art is very busy, suited to the circumstances, and his Deadpool is lithe and athletic, always on the move and really mottled and stomach-turning when out of costume. That’s relevant as he spends a considerable amount of time unmasked, which isn’t a regular feature of Deadpool titles.

By the end of the story Deadpool’s been set up with a new problem to play out in Soul Hunter, but that’s not the end of the book. The letters page in the original comics is as madcap as the strip as Deadpool answers all correspondence, and those are reprinted here.